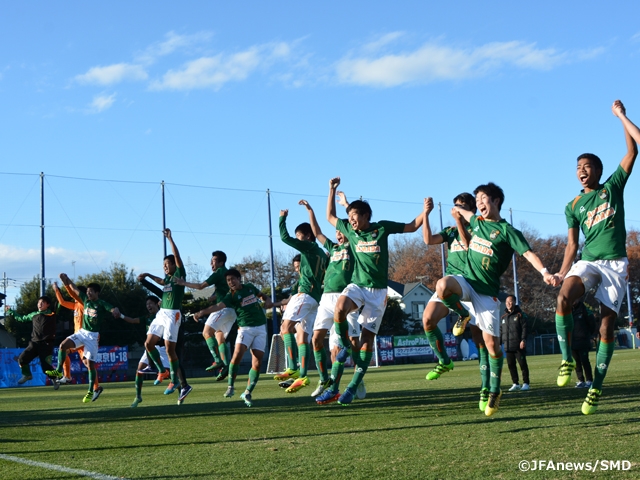 All the matches in the final week of the Prince Takamado Trophy U-18 Premier League EAST were held on Sunday 11 December. F.C. Tokyo U-18 (Tokyo) in second place met the current leaders, Aomori Yamada High School (Aomori), at F.C. Tokyo Kodaira Ground in Kodaira city in Tokyo.

F.C. Tokyo needed a win in order to reach the top spot. Aomori Yamada, on the other hand, could clinch the title of the league if they won or drew the match, but coach KURODA Go encouraged the players to ‘face the match with a determination to win’. Both teams were fierce in attack and tenacious in defence from the beginning of the match, surrounded by 1100 spectators in the stadium.

Early in the game, F.C. Tokyo strung passes to move into the opponents’ half repeatedly by attacking from the sides. In the 27th minute, UCHIDA Takuya, who got through on the right, sent a cross ball in front of the goal. Although ITO Junya’s shot was saved by goalkeeper HIROSUE Riku, it was the very first goal-scoring opportunity in the game. 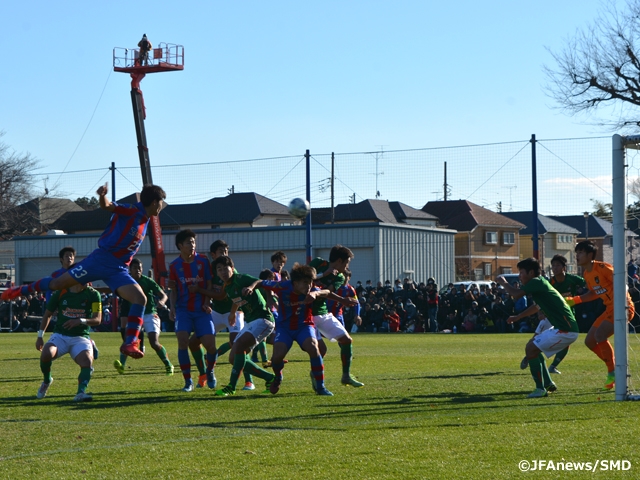 F.C. Tokyo again went close to the goal with Uchida’s shot in the 44th minute and HIRAKAWA Rei’s attempt in the second minute of injury time. However, ss Hirosue later commented, Aomori Yamada ‘defended solidly in front of the goal to prevent the opponents from freely firing shots, even though they let them create chances from the sides’. They kept a clean sheet at halftime.

During the break, coach Kuroda told the players: ‘let’s stay focused. If we are not careful, we are going to make a mistake, which you’ll regret for the rest of your life.’ In the second half, F.C. Tokyo continued to attack, and Aomori Yamada concentrated on defence. However, Aomori Yamada started to counter attack more often to bring the ball up front. Although they did not take a single shot in the first half, TAKAHASHI Issei led the team and brought positive energy to offence, while they defended solidly.

The game changed in the 85th minute. SASAKI Kai of Aomori Yamada was taken down in the penalty area and earned a penalty kick. Takahashi calmly scored from it, striking the much-awaited opener.

F.C. Tokyo were at the end of their tether. Although MATSUOKA Rimu and KUBO Takefusa, who came off the bench, performed desperately to get close to the goal, they could not impact the match. Aomori Yamada stayed physically strong against the opponents’ fierce attack and defended solidly, maintaining their one-goal lead until the final whistle. Aomori Yamada earned the title of EAST for the first time.

As a result, Aomori Yamada as the champions of the EAST will participate in the Prince Takamado Trophy Premier League 2016 Championship on Saturday 17 December. The team will meet Sanfrecce Hiroshima FC Youth, the winners of the WEST, competing to be the strongest U-18 team in Japan. 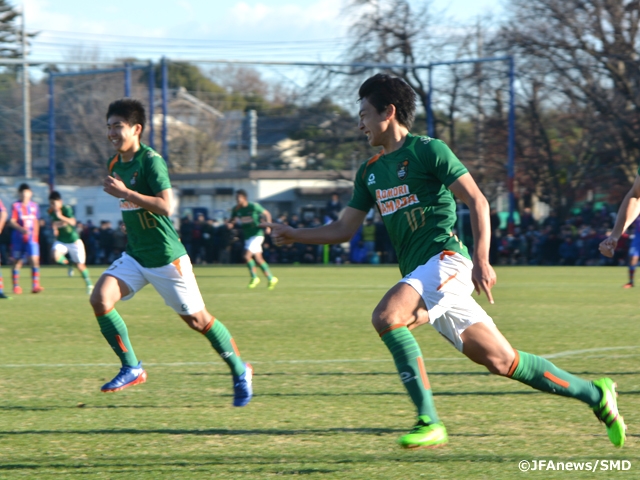 SATO Kazuki, Coach (F.C. Tokyo U-18)
We prepared ourselves, focusing solely on winning this match. The players did perform well, creating goal-scoring opportunities. Despite the fact that making scoring chances is essential, I believe Aomori Yamada had a slightly stronger determination for victory than us. Some of the players in our team play for F.C. Tokyo U-23 in the J3, but all the players performed well until the end. I appreciate the efforts they put in. Personally, I feel I had the best coaching experience in Japan, learning more options of how to attack. I’m grateful to the coaching staff for supporting us throughout the year.

KURODA Go, Coach (Aomori Yamada High School)
Although we did not aim to draw the game, we were determined to manage risks in defence. We prevented the opponents from going into the penalty area, while looking for opportunities to take shots. We were happy to score in any manner, including from a penalty kick or a free kick. Then we managed to strike a goal from a penalty kick in the end. We won the game today thanks to the players’ tenaciousness. We’d like to meet Hiroshima as challengers in the Championship with a competitive spirit.

SASAKI Kai (Aomori Yamada High School)
When I was sent on to the pitch, I was told by the coach to ‘chase the opponents in defence, while looking for goals.’ I was in a scramble in front of the goal, aiming to get a loose ball. When I was going to reach the ball in front of me thinking ‘dribbling up’, the opponent’s foot caused a foul and I earned a penalty kick. I was pleased without thinking of a player who was going to take the spot kick. I’m glad that TAKAHASHI Issei scored from it. Although it was not the neatest way, we still managed to get a positive result.

TAKAHASHI Issei (Aomori Yamada High School)
As I was determined to win the game to participate in the Championship, I played with a strong fighting spirit. When I scored from a penalty kick, I struck the goal with confidence, as I knew my teammates gave me this opportunity. I was over the moon when I scored. I usually don’t express much of my feelings, but I was really happy. The struggle to win the EAST lasted until the end. However, I’m very pleased that we earned the title. We’d like to perform our best in the Championship, thinking of the other nine teams.

HIROSUE Riku (Aomori Yamada High School)
I tried to play as usual. Since F.C. Tokyo have players with high individual skills, we struggled to display our playing style. However, it was good that we performed tenaciously. We defended physically against crosses in order to prevent the opponents from scoring. We let the opponents break through our sides, which will be the area that needs to be worked on now. Although we won the title of the EAST, we’d like to refresh ourselves in preparation for the Championship. Winning the next game means a lot to us after becoming the champions in the EAST.

All three teams from Chiba won their final games this weeked. Ryutsukeizaidai Kashiwa, who could not avoid relegation, won against Kashima Antlers Youth (Ibaraki) 3-1, finishing the league with two consecutive wins. Kashiwa Reysol U-18 scored one in the first half and another in the second, beating Albirex Niigata U-18 (Niigata). Ichiritsu Funabashi High School (Chiba) defeated Shimizu S-pulse Youth (Shizuoka), building up momentum for the coming All Japan High School Soccer Tournament.

Omiya Ardija Youth, who managed to keep their hope alive for wining the league, lost to Yokohama F・Marinos Youth (Kanagawa) 3-0 after conceding a goal in the first minute. The team finished in fourth place in the end.