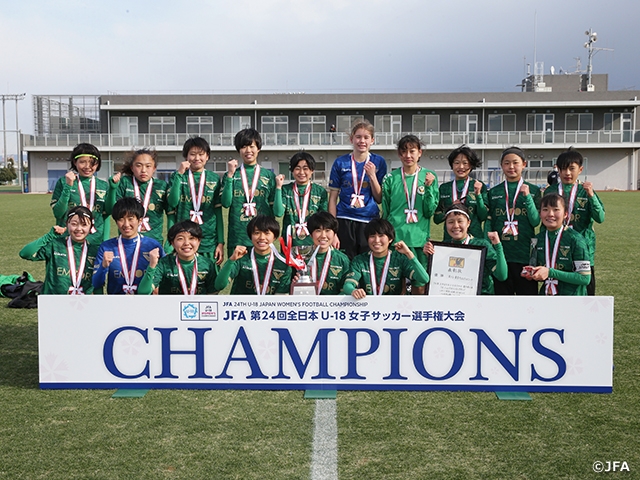 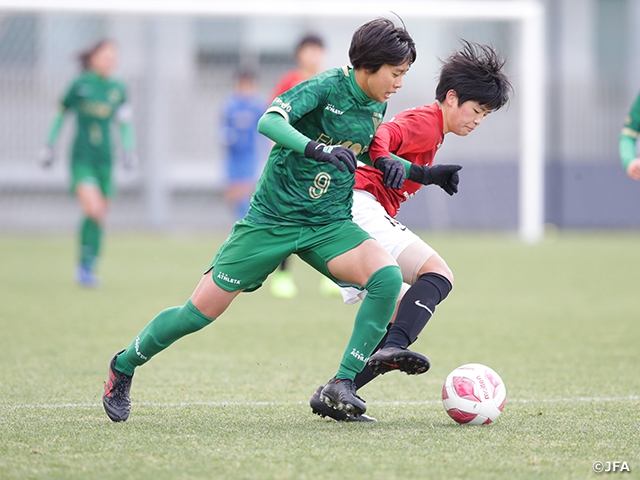 The final kicked-off under occasional snow and strong wind, but the players showed great enthusiasm to put up an intense and high-level match at the final.

Both sides have conceded zero goals leading to the final, setting up an intense battle to break the deadlock. The moment arrived in the 45th minute when Urawa Red Diamonds Ladies Youth’s (Kanto1/Saitama) SHIMADA Mei responded to a long feed delivered by their GK FUKUDA Shiori and scored the opening goal. Despite taking the lead, Urawa’s coach KUSUNOSE Naoki warned his players, “We will be playing against the wind in the second half, and we know our opponent will not let us win easily, so let’s start from scratch.”

The wind continued to blow hard and with teams switching sides in the second half, Nippon TV Tokyo Verdy Menina’s (Kanto3/Tokyo) coach SAKAGUCHI Keisuke mentioned, “(With the team playing against the wind) We had to be patient in the first half. Second half is when we attack.” Just as their coach anticipated, Nippon TV rallied in the second half, with YAMAMOTO Yuzuki scoring back-to-back goals scored in the 57th and 73rd minute to grab the lead.

After giving up the lead to Nippon TV, Urawa responded quickly, as Shimada assisted the goal of NISHIO Hanon in the 78th minute. With the score tied at 2-2, the match entered overtime, where the two sides play 10 minute halves to determine the winner. 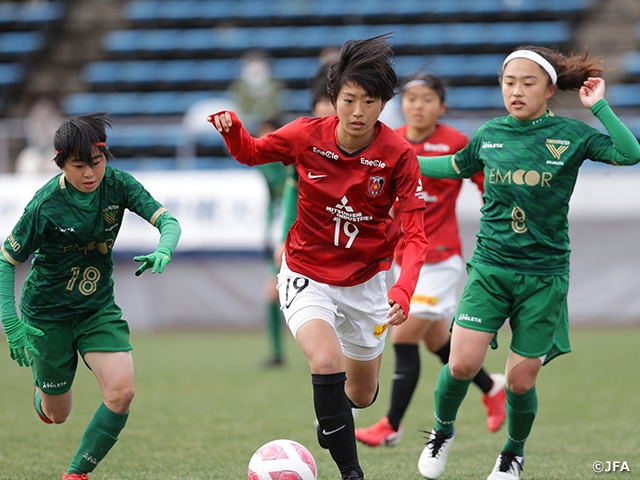 The two sides exchanged close opportunities in overtime, threatening each other’s goal, but fell short from scoring the deciding goal, until the clock went into additional time of the second half of overtime. The golden moment came in the 111th minute, when Nippon TV applied numbers to surge the Urawa goal. Despite the tenacious defensive efforts made by the Urawa side, HIJIKATA Maya made a running effort to squeeze the ball into the net, giving Nippon TV their ninth overall title of the U-18 Japan Women's Football Championship.

KUSUNOSE Naoki, Coach (Urawa Red Diamonds Ladies Youth)
We are grateful that this tournament was held despite the ongoing pandemic. We would like to thank all the people who were involved in making this tournament possible. After both of our top teams competed at the Empress's Cup final, this was sort of like a rematch, so we were looking forward for this match. We both knew about each other very well, and it felt like Menina had a slight edge over us in terms of techniques and composure, which turned out to be the big difference in overtime. Although this match was played under a difficult weather, both sides showcased great techniques and decision makings. I am proud of how our players played today. I hope the development of our players will not be disrupted by the shortened season caused by the pandemic.

FUKUDA Riko (Urawa Red Diamonds Ladies Youth)
We entered this match with a strong intention to “fight as a team and win as a team.” Although it was great to see us score the opener, (Nippon TV’s) KINOSHITA Momoka really changed the momentum of the match after being introduced in the second half. It also makes a big difference, whether you are playing with or against the wind too, but our opponent was playing under the same condition, so that cannot be used as an excuse. The fact that we conceded at the very end makes it so regretful. This year really made us realise that we cannot take for granted of the environment where football is part of our daily lives, and we must cherish the opportunity to play football and be more thankful to our teammates. I wish we were able to play more matches, but I am thankful that we were given the opportunity to play in this tournament at the end.

SAKAGUCHI Keisuke, Coach (Nippon TV Tokyo Verdy Menina)
In the past, we struggled to play under windy or rainy conditions, and we thought our opponent had the upper-hand in terms of physical strengths, but our players managed to make the necessary adjustments and scored more goals than our opponent to claim the victory. We faced many tough matches at this tournament, and I think it allowed us to play patiently at the final. We changed our team strategy to emphasise our individual strengths and it was exciting to see our players showcase strong performances to win this title. I hope these players will continue to improve themselves so that they can move onto play for Beleza and eventually become members of the Nadeshiko Japan (Japan Women’s Football Team).

HIJIKATA Maya (Nippon TV Tokyo Verdy Menina)
I entered the match as a substitute, and I was determined to score a goal when I entered the pitch. The wind was blowing much stronger than I thought, so we had to take in consideration of the wind when connecting our passes. Our opponent was showing great intensity on the pitch, which made it difficult for us to score goals, but I am so glad that I was able to convert the one chance I was given and contribute for the team’s victory. We really stuck together as a team and won the title as a team. This year, we were placed in a tough bracket with Cerezo, JEF United, and Urawa, so it makes this win that much more meaningful. 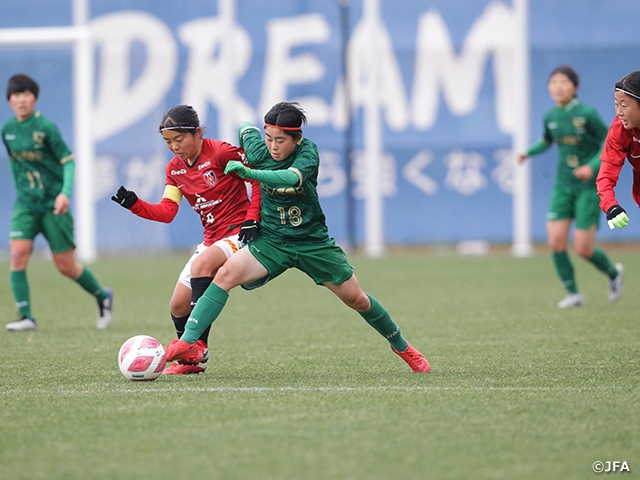