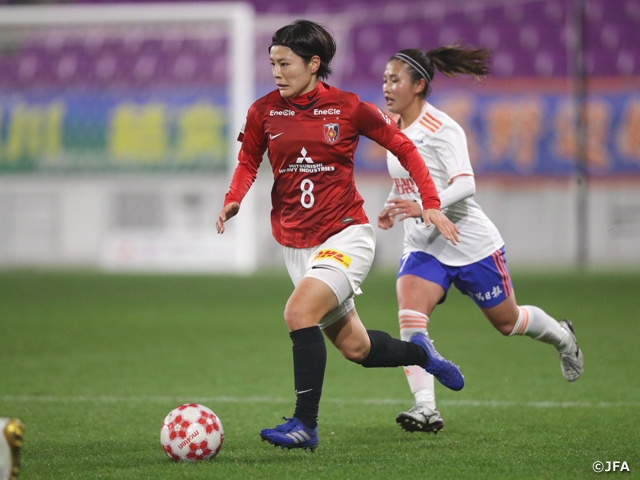 In the match between Nippon TV Tokyo Verdy Beleza (Nadeshiko1/Tokyo) and Mynavi Vegalta Sendai Ladies (Nadeshiko1/Miyagi), both sides entered the match with the same line-up from the quarterfinals.

In the early minutes of the match, Mynavi Sendai collected the ball to SHIRAKI Akari, who repeatedly delivered passes to their ace, HAMADA Haruka to threaten the Beleza goal. However, the goal scored by Nippon TV Beleza in the 26th minute changed the dynamics of the match. The goal came when KOBAYASHI Rikako delivered a cross towards the middle, allowing ENDO Jun to score in back to back matches, giving the Tokyo side a 1-0 lead.

In the 39th minute, Nippon TV Beleza’s 17 year old MF, KINOSHITA Momoka, was fouled inside the box to earn a PK. Kobayashi, who has scored three goals at the tournament, took the spot-kick, but missed the target, failing to capitalise on the opportunity.

Despite missing their golden opportunity to extend their lead at the end of the first half, three time defending champion Nippon TV Beleza started to pick up their pace in the second half. In the 52nd minute, Miyazawa Hinata broke loose after playing a give-and-go with HASEGAWA Yui before scoring the team’s second goal. Five minutes later, Hasegawa assisted another goal, this time setting up Endo’s second goal of the match to make it 3-0.

In efforts to rally back, Mynavi Sendai brought in ARIMACHI Saori in the 72nd minute, but couldn’t stop Beleza’s momentum. Endo switched her position to the right side to create more chances, as she scored her third goal of the match in the 79th minute to make it 4-0 for the defending champion. 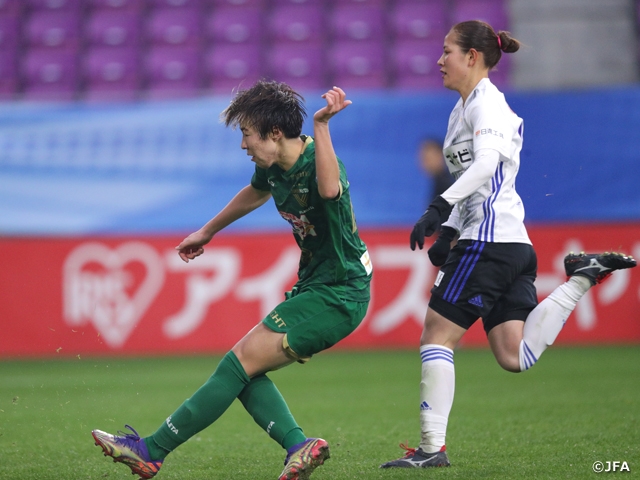 Hamada managed to score a consolation goal for Mynavi Sendai at the end, but Nippon TV Tokyo Verdy Beleza cruised through the semi-finals with a 4-1 victory, getting one step closer to their fourth consecutive Empress's Cup title.

The two sides have scored many goals from set-pieces thus far, and it was no different in this match, as NAOMOTO Hikaru converted a FK earned by SHIOKOSHI Yuzuho in the 13th minute to give Urawa an early lead.

Albirex Niigata responded quickly, as they scored the equaliser in the 24th minute. The goal came from a counterattack initiated by their GK TAKAHASHI Tomoko, as the ball was connected through KAWAMURA Yuri and TAKIKAWA Yume before finding KAMIONOBE Megumi, who struck a left footed shot just that found the back of the net. In efforts to retake the lead, Urawa collected the ball to their ace SUGASAWA Yuika, but Niigata’s LEE Hyokyeong showcased a spectacular defensive effort to keep the Japanese international from scoring a goal.

Despite conceding the equaliser, Urawa continued to control the match, but it was Niigata who created the first big chance in the second half, as Kaminobe’s shot struck the cross bar in the 55th minute. In efforts to change the dynamics of the match, Urawa brought in TAKAHASHI Hana to replace Sugasawa, but couldn’t find ways to break down the Niigata defence, as the match remained tied at 1-1 after 90 minutes of play. 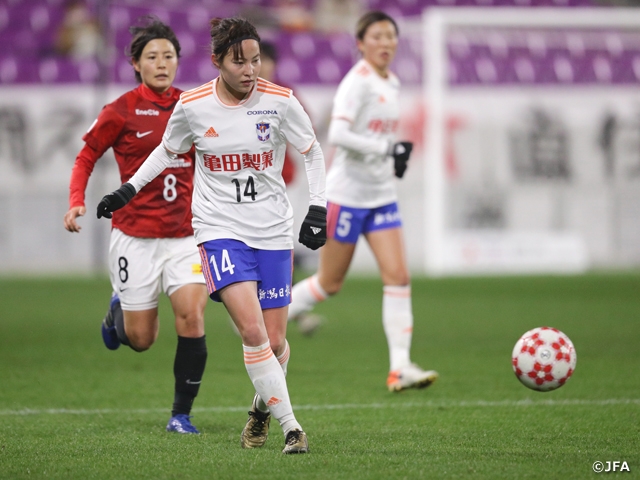 Both sides came within inches to score the go-ahead goal during overtime, as Urawa’s NAGASHIMA Reina and Niigata’s TAKIZAWA Rio both fired shots that struck the cross bar, but the score-line remained leveled, sending the match into PKs to determine the winner.

While all five Urawa players successfully made their spot-kicks, Niigata’s Kawamura failed to convert her kick, giving Urawa the victory. Urawa will now seek to claim their first ever Empress's Cup title against the three time defending champion.

FW #18 ENDO Jun (Nippon TV Tokyo Verdy Beleza)
It was great that we managed to win the match. We were able to showcase our usual passing football style in the second half. (Reflecting on the second goal) I saw Yui-san’s (Hasegawa) wind-up to deliver a pass, so I instinctively made a run, and the ball came right to me. I am glad I was able to convert that shot. We can play with a huge advantage at the final if we can grab an early lead, so I will stay eager to score more goals.

FW #6 HAMADA Haruka (Mynavi Vegalta Sendai Ladies)
This was our final competition with this team, so we really wanted to reach the final. The players who are retiring or leaving the team are the players who were there for the team during the tough times, and without them, we would not be here today. That is a tradition I hope to succeed from those senior players.

MF #8 NAOMOTO Hikaru (Urawa Red Diamonds Ladies)
(Reflecting on the opening goal) I was able to execute the shot just as I wanted. I practiced taking shots from that position so many times, so I had a lot of confidence taking that FK. The team managed to recycle the loose balls to initiate more attacks, and that really helped our offence today. There will be a lot of fireworks in our next match against Nippon TV, so we hope to enter the match by showcasing a solid performance in defence to build a positive momentum.

OKUYAMA Tatsuyuki, Coach (Albirex Niigata Ladies)
PKs can go either side. I would like to thank my players for giving everything they’ve got until the very end. We created many close opportunities, including those two shots that struck the cross bar. We don’t know exactly what is going to happen with the WE League, but we will continue to play our football style, while striving to build a team that can play with patience and convert chances at the final third.