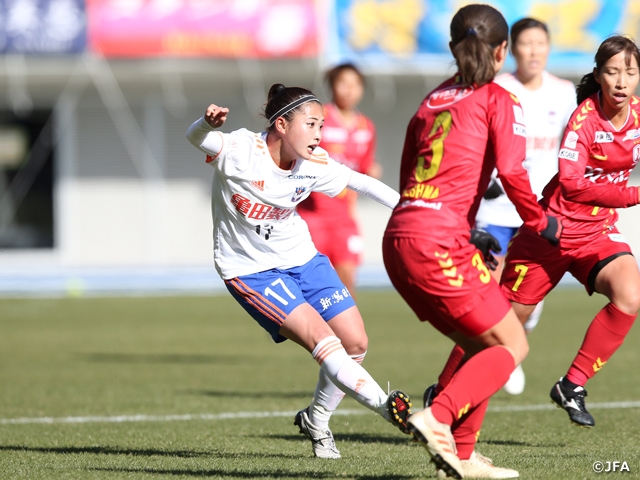 INAC Kobe Leonessa (Nadeshiko1/Hyogo), who is seeking for their first Empress's Cup title since 2016, squared off against Albirex Niigata Ladies (Nadeshiko1/Niigata), who was the runners-up in 2016.

The match kicked-off with Albirex Niigata showing their aggression, as SONODA Mizuki carried the ball upfront to threaten the opposing goal. INAC Kobe’s SUGITA Hina responded in the 22nd minute as she fired a shot that struck the post of Niigata’s goal. The opening goal came in the 26th minute, when Sugita delivered a cross towards the centre, allowing TAKASE Megumi to redirect the ball into the goal. Sugita went on to assist Kobe’s second goal, this time setting up the goal of NAKAJIMA Emi in the 39th minute to extend their lead.

Despite conceding two goals, Niigata kept their aggressive approach, as their fullbacks continuously made runs down the line to add layers to their offence. Their efforts got paid off just before halftime, as Sonoda assisted the goal of TAKIKAWA Yume to cut their deficit in half. After finishing the first half on a high note, Niigata carried the momentum into the second half, as their captain KAWAMURA Yuri scored the equaliser in the 51st minute, when she converted a cross delivered by KAMIONOBE Megumi. With the two veterans combining to level the match, the tides shifted towards the Niigata side. Just two minutes later, KITAGAWA Hikaru broke through the left flank and delivered the ball to ISHIBUCHI Moemi, who made the run and scored with a spectacular lob-shot that shook the net.

In efforts to equalise the match, INAC Kobe rallied in the closing minutes, but fell short from scoring the goal, sending Albirex Niigata Ladies into the semi-finals. 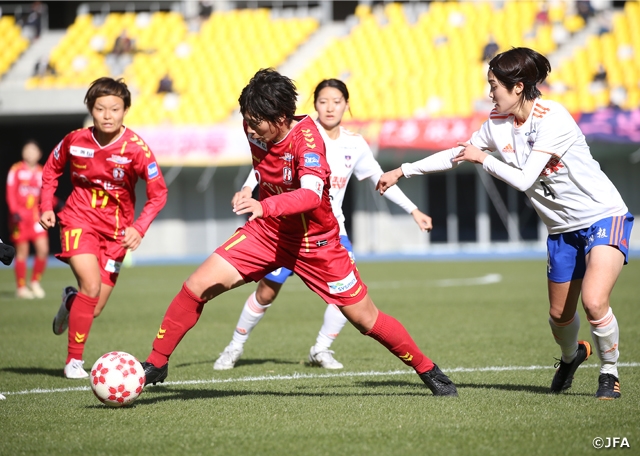 The match started with Nojima Stella setting up a block in the middle of the field, but the three time defending champion utilised the width of the field to create opportunities from the early minutes. The opening goal came in the 16th minute, when MIYAZAWA Hinata scored a goal off a cross sent by SHIMIZU Risa. MIURA Narumi came close to doubling Beleza’s lead in the 34th minute, as her shot struck the cross bar of the Nojima goal.

In efforts to change the dynamics of the match, Nojima Stella brought in NAKANO Manami mid-way into the second half. However, it was Beleza who scored the next goal, as their ace KOBAYASHI Rikako captured the goal in the 76th minute. Following this goal, Beleza went onto a goal spree, scoring three more goals within eight minutes, including Kobayashi’s second and third goal of the match. 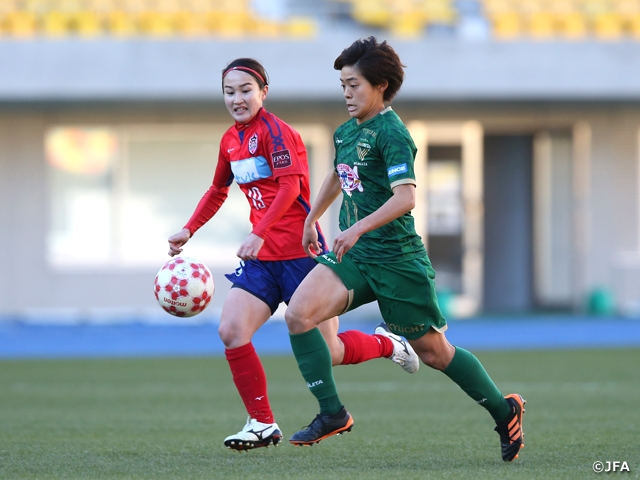 As a result, Nippon TV Tokyo Verdy Beleza cruised through the quarterfinals with a dominating performance, winning the match 5-0.

Gert ENGELS, Coach (INAC Kobe Leonessa)
This was a very tough match, but it was great to see our side score the first two goals. However, we failed to control the match and conceded a goal before halftime. We lacked confidence in the second half and gave up the lead within a short span. We were not able to showcase a clever performance to control the game. We ended as the runners-up in the league and now finished the Empress's at the quarterfinals. We were not able to give our best performance this year, but we will work ahead of the next season to become the real tournament favourite next year.

MF #10 KAMIONOBE Megumi (Albirex Niigata Ladies)
After conceding two goals in the first half, we were facing an uphill battle, but our overall performance was not so bad. We managed to win the match because we were able to stick with our game plan. (Reflecting on the assist to Kawamura) I saw my teammates making the run upfront, so I just focused on delivering a good ball. We had been eliminated from the tournament at the early stages in the recent years, so we hope to make a deep run and win the title this year.

FW #11 KOBAYASHI Rikako (Nippon TV Tokyo Verdy Beleza)
Although we won the match 5-0, we did not play well in the first half, and I personally had many flaws that need to be addressed. I was playing too deep and lacked eagerness to score goals, so I needed to make better decisions today. We are yet to win a title this year, so we are definitely aiming for this title, but we will focus on our next match and try to take it one match at a time.

MF #6 MATSUBARA Arisa (Nojima Stella Kanagawa Sagamihara)
It felt like it took too long for us to find our rhythm. We also lacked intensity in defence, as we needed to fight harder to win the ball. Our defensive midfielders were too far away from our defence line, and I wish I could have controlled the team to fill in that gap. We are thankful for all the people who has supported us during this pandemic. It was a disappointing year, but we hope to learn from this experience and strive to become a better team ahead of next season.