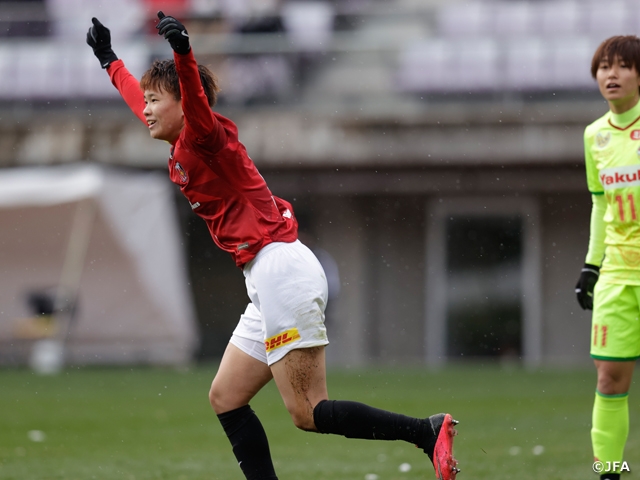 Urawa Red Diamonds Ladies (Nadeshiko1/Saitama), who is seeking for their first ever Empress's Cup title, squared off against JEF United Ichihara Chiba Ladies (Nadeshiko1/Chiba). Both teams have not conceded a goal at the tournament, but the two sides combined for five goals in this match.

The pitch was still covered with snow at Yurtec Stadium Sendai, but Urawa, the 2020 Plenus Nadeshiko League division 1 champion, showcased their solid techniques to create chances from the early minutes. The opening goal came in the 11th minute, when SEIKE Kiko connected with a CK delivered by NAOMOTO Hikaru to give Urawa the early lead. SHIOKOSHI Yuzuho followed in the 15th minute with a powerful shot taken from distance to make it 2-0.

After being contained to just two shots in the first half, JEF United started to fight back in the second half. Moments after coach SARUSAWA Shinji made the double switch to bring in SETOGUCHI Kozue and OZAWA Hiro, the two players combined to score JEF United’s first goal, as Ozawa struck a tremendous shot which was set up by Setoguchi. Just three minutes later, Setoguchi converted the cross delivered by KAMOGAWA Miho to equalise the match at 2-2.

Despite taking out SUGASAWA Yuika, Nadeshiko League’s top scorer, in the 80th minute, it was the Urawa side who scored the next goal. The goal came in the 83rd minute, when Naomoto’s FK was redirected towards the goal by Seike, which allowed MINAMI Moeka to notch the go-ahead goal into the net.

In efforts to rally back, JEF United kept CHINO Shoko in the attacking third but time ran out for the Chiba side, as the league champion, Urawa Red Diamonds Ladies advanced to the semi-finals. This was the final official match for JEF United ‘s GK, YAMANE Erina, who had announced her retirement following this season. 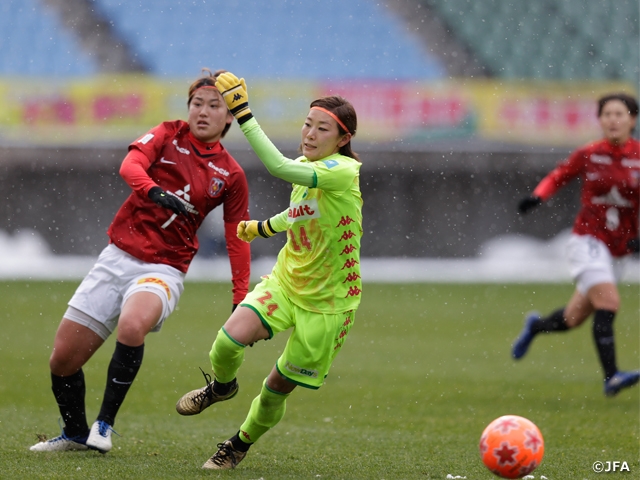 With the home crowd on their side, Mynavi Sendai’s ace HAMADA Haruka got off to a hot start, scoring back to back goals in the second and 25th minute to give Sendai an early two goal lead.

The two goals did not deteriorate the momentum of Cerezo Osaka, who finished in in fourth place, their best finish, at the Nadeshiko League, as they continued to apply numbers upfront. In the 65th minute, HAMANO Maika converted a deflection created by the shot taken by Hayashi to make it 1-2. NOJIMA Sakura followed in the 82nd minute, capitalising on a loose ball created by TAMAZAKURA Kotono’s shot, equalising the match at two apiece.

After making a late comeback, Cerezo carried their momentum into overtime, as they scored a goal just before the end of the first half. Starting from her own half, Takarada carried the ball deep into the opposing territory and delivered the final pass to Hamano, who dribbled past the Sendai GK and scored the go-ahead goal.

With their backs against the wall, Sendai responded in the 111th minute, when ARIMACHI Saori, who scored the winning goal at the third round, converted a loose ball following a goal mouth scramble to level the match once again. The goal made the home crowd wild and the match entered PKs to determine the winner.

While the Sendai players made all five of their spot kicks, Cerezo missed one of their attempts, sending Mynavi Sendai Ladies into the semi-finals. Arimachi, who will be retiring after this tournament, has led the team into the team’s first semi-finals since 2016. 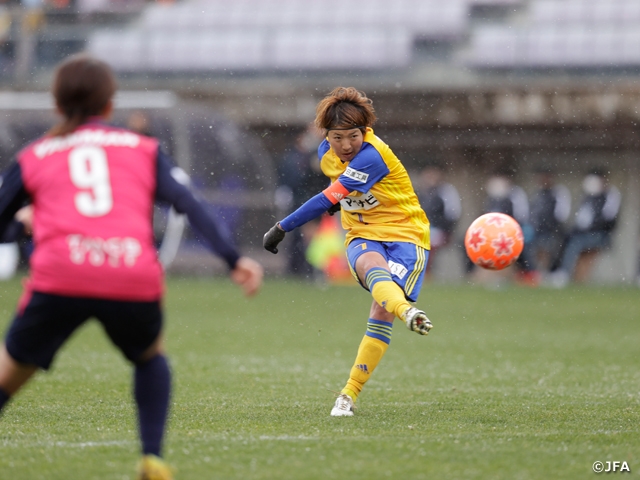 DF #3 MINAMI Moeka (Urawa Red Diamonds Ladies)
We must reflect on the fact we conceded two goals, but winning the match is the most important thing at the Empress's Cup. We saw Niigata come from behind to defeat Kobe yesterday, so that match really inspired us. We managed to possess the ball and play our football in the first half. I have not scored a goal this season, so I was eager to score a goal. We would like to thank all the staffs of Sendai for preparing the pitch for this match.

MF #8 SETOGUCHI Kozue (JEF United Ichihara Chiba Ladies)
We made changes to our usual setup and entered the match with a defensive approach. However, we failed to apply enough pressure and conceded early in the match. Set pieces have been our weakness, and we were not able to change that during the season. The team has shown improvements over the season, but we need to improve at a higher rate.

DF #11 TAKARADA Saori (Cerezo Osaka Sakai Ladies)
We managed to possess the ball and create many chances, but we lacked quality at the final third. Although I was able to create plays that led to our team’s goals, I missed my PK that costed the match. We must accept the fact that we lost the match despite showcasing our football style. We hope to make the most of this experience to improve ourselves and return to this stage in the future.

Karashima Keiju, Coach (Mynavi Sendai Ladies)
It was great to see our side lead by two goals in the first half, but we were forced to be in the defensive end for a long time, and we started to run out of gas towards the end. Watching the entire match, it felt like we were fortunate to win this match. The substitute players showcased a wonderful job to get us back into the game. We will have limited time to prepare for our next match against Nippon TV Tokyo Verdy Beleza, but we will give our best efforts to reach the tournament final.