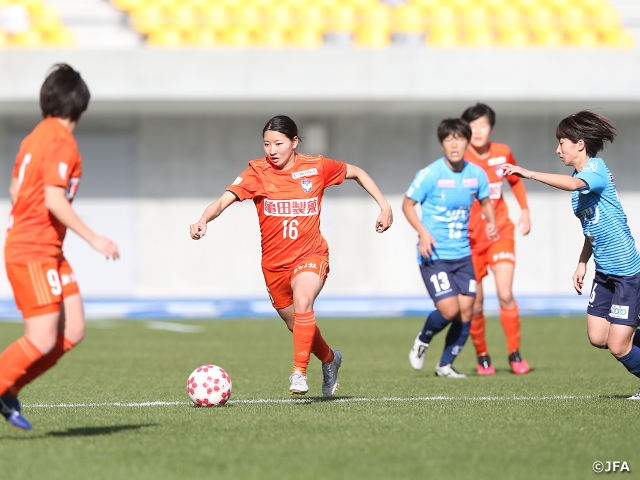 While it was the Niigata side who controlled the ball possession, Nippatsu Yokohama showed great composure to defend against them. The Niigata offence orchestrated by KAMIONOBE Megumi showed created many chances to threaten the opposing goal, it was the Yokohama side who scored the opening goal.

The goal came in the 37th minute, when the FK delivered by NAGASHIMA Hikari from the left side drifted over the head of the Niigata GK TAKAHASHI Tomoko, and despite the effort made by SONODA Mizuki to clear the ball, the ball carried enough momentum to break the goal line, giving Nippatsu the lead.

Despite conceding the opening goal, Niigata continued to take control over the ball possession in the second half. In the 67th minute, KAWAMURA Yuri connected with a FK delivered by SONODA Yuna to score the equaliser with a header. With KONO Fuka entering the match in the 69th minute, the Niigata side gained more momentum. Kono, who joined Niigata this season, converted a CK in the 75th minute to give her side the lead. With time running out, Kono once again scored a goal to seal the match, as Niigata earned a come from behind victory, thanks to the brace scored by Kono. 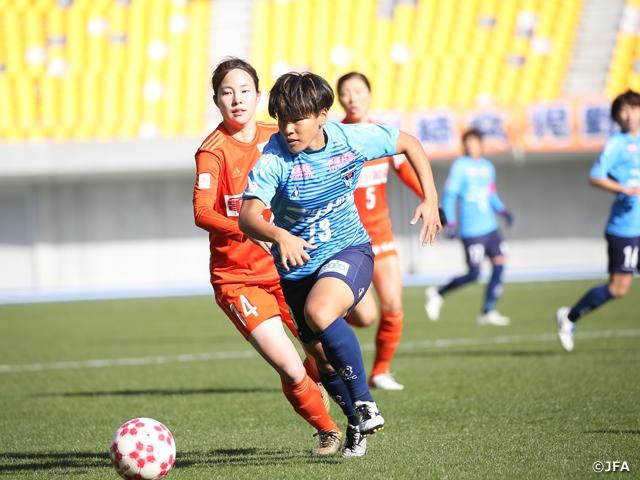 The match started with Sfida Setagaya’s right fullback, NEMOTO Ayaka sending numbers of long feeds to HORIE Mitsuki to take the initiative. Mynavi Sendai responded by collecting the ball to their striker HAMADA Haruka, but both sides fell short from scoring the opener in the first half.

It was the Miyagi side who showed more aggression in the second half, but led by SENO Yuki, Sfida Setagaya showcased a solid performance in defence to keep the clean sheet intact. Hamada came within inches to break the deadlock during additional time of the second half, but her shot struck the cross bar, sending the match into overtime with a scoreless draw.

The two Niigata players who entered the match in the second half thrived in over time. In the 94th minute, ARIMACHI Saori, who has announced her retirement after this season, connected with a fast driven cross delivered by FUNAKI Rina to break the deadlock, giving Niigata the much awaited lead.

However, Setagaya’s late substitute TAKISHITA Mahiru responded to a feed delivered by NAGASAKI Akane to score the equaliser in the 110th minute, bringing back the two sides to equal terms.

Tied at 1-1 at the final whistle, the match entered PK shootouts, where Sendai converted all five of their spot kicks, while Setagaya’s fourth kicker missed her shot, sending Mynavi Sendai Ladies to the quarterfinals. 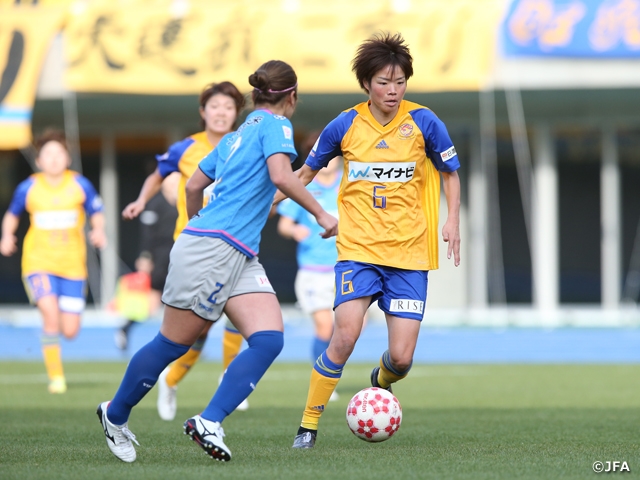 OKUYAMA Tatsuyuki, Coach (Albirex Niigata Ladies)
Facing an aggressive opponent, we prepared ourselves for a tough match. After penetrating the flanks in the first half, we managed to reorganise ourselves and score from a FK. It all went as planned. We will be facing INAC Kobe Leonessa at the quarterfinals, an opponent we know so much about, but it goes without saying that they are fully aware about us as well. We must get to the training grounds and work hard to find ways to beat them.

DF #17 SAKAMOTO Riho (Nippatsu Yokohama FC Seagulls)
We were able to put up a good fight in some respects, but the difference between a division 1 team and a division 2 team really showed in the second half. We thought we would have a chance to win the match if we can keep the first half scoreless, and despite scoring the opening goal, we ran out of gas and allowed our opponent to take control of the match afterwards. However, we conceded very few goals during the season, which gave us great confidence moving forward. We hope to join the WE League in the future, so we must improve ourselves to be able to compete at a higher level.

FW #10 ARIMACHI Saori (Mynavi Sendai Ladies)
We were expecting a tough match but did not expect the match to enter PKs. The goal scene came during a tough time and the play was setup by my teammates who had been running for over 90 minutes, so I gave my best shot. Taking the first PK was nerve-racking, but I took the shot on behalf of my teammates who were not able to make it to this match. Our next match will be played at our home stadium, so we hope to win the match and advance to the semi-finals held at Kyoto.

KAWABE Kenichi, Coach (Sfida Setagaya FC)
This was a great opportunity to see how the top team of the Nadeshiko League division 2 can cope against a division 1 team. Our players exceeded my expectation and played extremely well in the first half. This season, our team consisted mainly players from the youth category and university teams, while adding a few players with division 1 experience. Although we were able to win the title at division 2, we still lacked quality in the attacking third, so we hope to improve ourselves in that aspect.