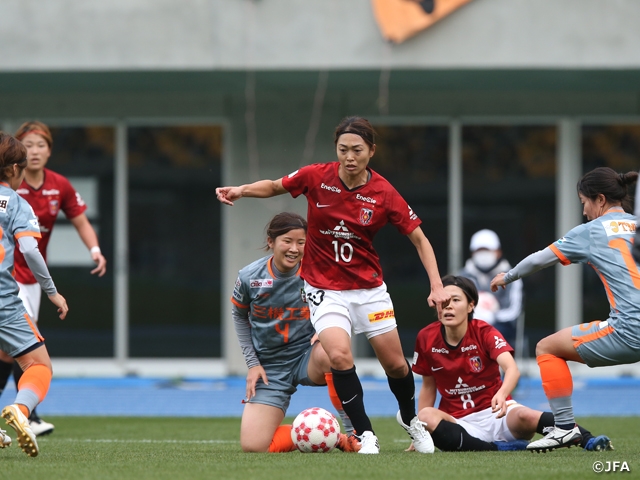 The match between two Nadeshiko League Division 1 sides, Nojima Stella Kanagawa Sagamihara (Nadeshiko1/Kanagawa) and Ehime FC Ladies (Nadeshiko1/Ehime), saw early action, as the opening goal was scored in the second minute. The goal came when Nojima Stella’s MINAMINO Arisa delivered a through ball from the right flank, allowing HIRATA Hikari to slot the ball into the net, giving the Kanagawa side an early lead.

However, Ehime FC, who just finished their first season at the top division of the Nadeshiko League, responded in the 19th minute, when YAMAGUCHI Chihiro converted a cross delivered by OYA Ayumi from the right side to equalise the match.

With the match tied at 1-1, Nojima Stella gradually picked up their pace in the second half. In the 61st minute, KAWASHIMA Haruna carried the ball deep in the opposing territory, passing the ball to MATSUBARA Arisa, who struck a shot from mid-range, but failed to find the net. However, their aggression was paid off in the 82nd minute, when Matsubara’s shot found Minamino, who quickly redirected the ball into the net, giving Nojima Stella the go-ahead goal. After scoring the decisive goal in back to back matches, Minamino later reflected on the play, “I was fortunate to be in that position,” as Nojima Stella advances to the quarterfinals. 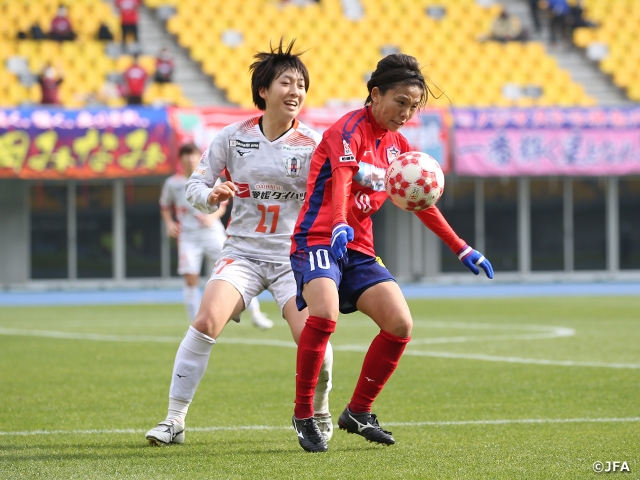 In the match between this season’s Nadeshiko League champion Urawa Red Diamonds Ladies and Yamato Sylphid (Nadeshiko2/Kanagawa), who reached the third round of the Empress's Cup for the first time in team’s history, saw the division 1 side dominate the match.

The match started with Yamato Sylphid showing aggressive defence to keep the Urawa offence at bay, but as the match progressed, the Urawa side gradually picked up their pace to take control of the match. With their fullbacks TAKAHASHI Hana and SEIKE Kiko adding layers to their offence, the Urawa side showed quick transitions, while NAOMOTO Hikaru made many attempts to threaten the Sylphid goal. The opening goal came in the 19th minute when ANDO Kozue received the ball in the penalty area and struck a shot into the left corner of the goal. Ando scored her second goal in the 51st minute, this time converting a cross delivered by Naomoto to double the team’s lead.

The Nadeshiko League champion, who consists many players of the Nadeshiko Japan (Japan Women’s National Team), continued to dominate the match, as they created numerous chances to threaten the opposing goal, but Sylphid’s GK TANAKA Momoko made great saves to keep the score intact. Despite falling short from scoring further goals, Urawa pocketed another shut-out victory, as their coach MORI Eiji later reflected, “We were able to execute our game plan.” 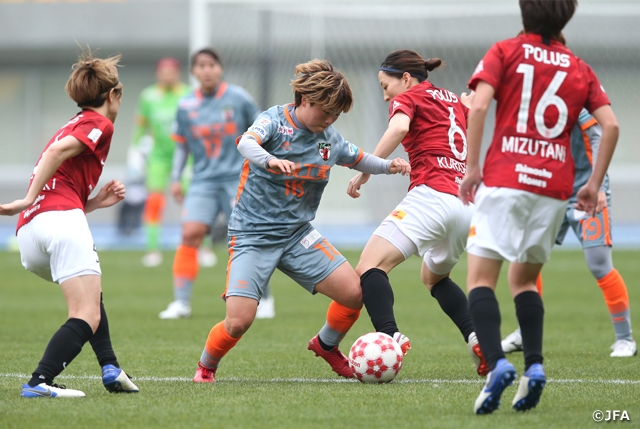 With Ando, a Tochigi native, scoring a brace at her hometown, the crowd gave her a standing ovation when she subbed off in the 83rd minute, as the veteran striker led her side one step closer to their first ever Empress's Cup title.

KITANO Makoto, Coach (Nojima Stella Kanagawa Sagamihara)
We know Ehime is a strong team, so we tried to possess the ball in their territory. Yamaguchi’s speed is at a different level, so we kept our build-ups away from her. A 1-0 win would have been better, but we still managed to play with great aggression, so we hope to utilise this experience for our future games. We did not concede any dangerous passes in front of our goal today. We will continue to train hard this week, so that we can keep another clean sheet at the quarterfinals.

MF #14 YAMAGUCHI Chihiro (Ehime FC Ladies)
Although we lost the match, we were able to showcase our football style from kick-off. It was so disappointing when we lost to Nojima 0-3 in last year’s tournament, but I have no regrets this year. After being promoted to the top division, our play speed has increased dramatically, but I must come up with more ideas when my opponent is taking measures against my dribbles.

FW #10 ANDO Kozue (Urawa Red Diamonds Ladies)
Our opponent was carrying great momentum into this match, so we knew the opening goal was going to be the focal point. It was great that I was able to keep my composure to score the first goal. My teammate did a great job to carry the ball deep in the opposing territory to set up my second goal. It was a goal that really showed our team’s colour. This is our second year playing under coach Mori, so we are more aware of our roles and capable of playing with confidence to showcase the football style he is striving for.

GK #16 TANAKA Momoko (Yamato Sylphid)
The speed of the match was so different compared to the second division, but we still managed to adjust in the second half. The fact that we were able to make adjustments during the match gives us great confidence moving forward. Last season, we conceded too many goals from long balls, but we manged to improve in that aspect and conceded less goals this season. If we can play the way we played in the second half of today’s match, we can become a better team, so we will try to incorporate today’s experience into our daily trainings.