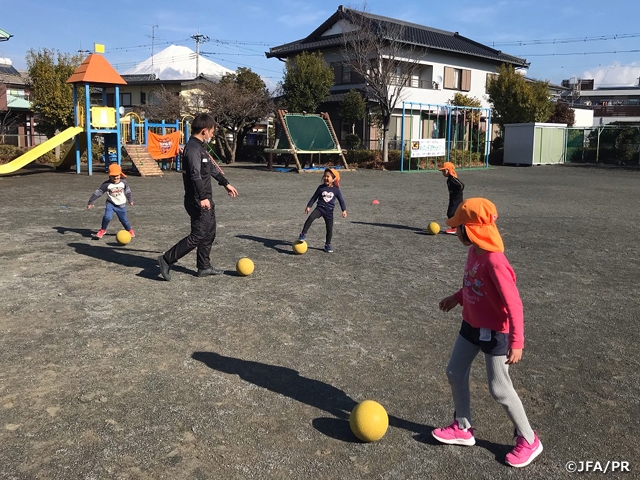 A total of 37 kids from the five-year old class participated on a windy Thursday. Everybody showed great enthusiasm from the start, as kids ran around to prepare for the course. They all listened to the coaches very closely and promised to never give up. Although some kids struggled to control the ball with their feet, they eventually got the hang of it, as they all helped each other out to complete each drill. The course concluded with a scrimmage game played between the boys and the girls, as they showcased a heated battle on the playground. 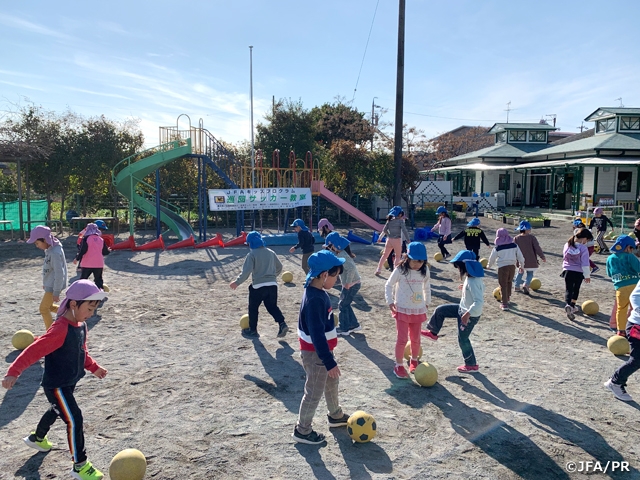 FUKAZAWA Saki (FA Traveling Guidance Staff)
Everybody gave their best efforts from start to finish. They all showed great enthusiasm to help each other out and played with great energy throughout the course. Although some kids struggled to get used to the ball, they eventually got used to it as they kept working on the drills.

Teacher/Staff in charge (Kindergarten Principal, Nursery Teacher)
The kids were introduced to variety of drills and the coaches did a great job to coney the joy of playing football to the kids. They all seemed to have lots of fun, as they all want to play again. The course was easy to understand and we had a great time. Thank you very much.

The course was held for 30 kids at S-Pulse Dream Field Shizuoka. Once the staffs arrived at the field, kids welcomed the coaches with a warm greeting. Kids were running around the pitch even before the course started, as they showed great energy throughout the course. Starting with light exercise to loosen up their bodies, the kids went through circuit training, ball control games, shooting drills, and finished off the session with a scrimmage. 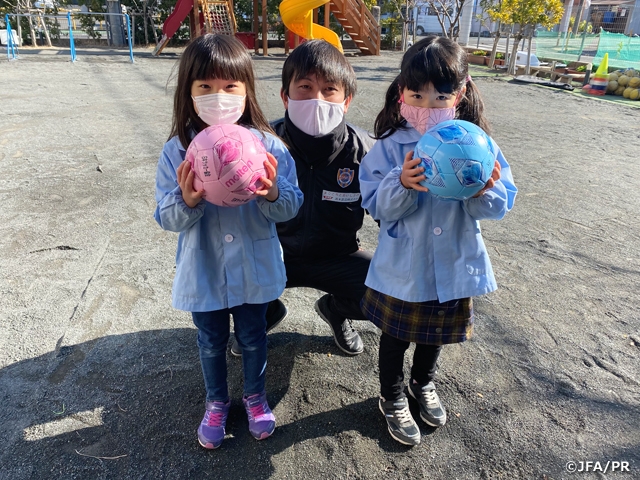 TOMITA Saki (FA Traveling Guidance Staff)
Kids were full of energy and we saw plenty of happy faces today. The hour went by so quickly. Everybody was eager to take on new challenges and they all worked very hard to complete each drill. I was also moved by the kids gestures to encourage each other. Once they were able to accomplish a drill, kids came over to report, “I did it!” which were so cute.

A session was held for 32 kids on a nice warm day. Kids listened in closely as the coaches explained the drills and showed great energy when it was their turn to play. With the support of the teachers, kids were able to enjoy themselves regardless of their prior experience with the ball.

KASHIWAGI Shintaro (FA Traveling Guidance Staff)
Kids kept the three promises they made with the coaches and worked with great positivity. We started with movement drills and worked through the course until we finished with a scrimmage. All kids looked so happy and shared lots of laughs with the coaches. The kindergarten has a wonderful goal set up at their playground, so I hope the kids will continue to play football.

Teacher/Staff in charge (Kindergarten Principal, Nursery Teacher)
While there are kids who are good at exercising and kids who are not, the session was made available for all types of kids, so that was great. After the session, many kids came and told me that they had fun playing football, so I am very glad that we held this course.