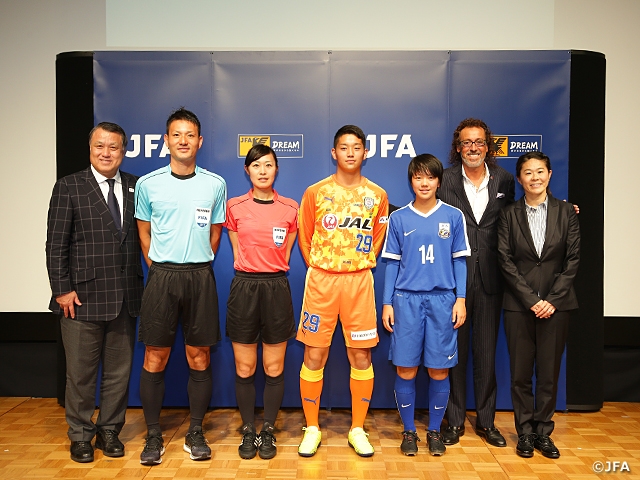 On Wednesday 1 November, the Japan Football Association (JFA) held a press conference to announce its new branding at the JFA House in Tokyo.

JFA President TASHIMA Kohzo explained the concept of the JFA’s rebranding in the opening speech: 'We have a dream. It is to win the World Cup before 2050. We are building our national teams to be strong and attractive and become the top of the world. We further promote our activities towards creating an all-inclusive society where anybody regardless of age or disabilities can enjoy the sport.' He also talked about the background of this restructuring its brand: 'JFA reviewed its values and purpose as well as its social responsibilities prior to the strengthening of the foundation and reconstruction in order to move on to our vision with everyone who enjoys and works for football.' 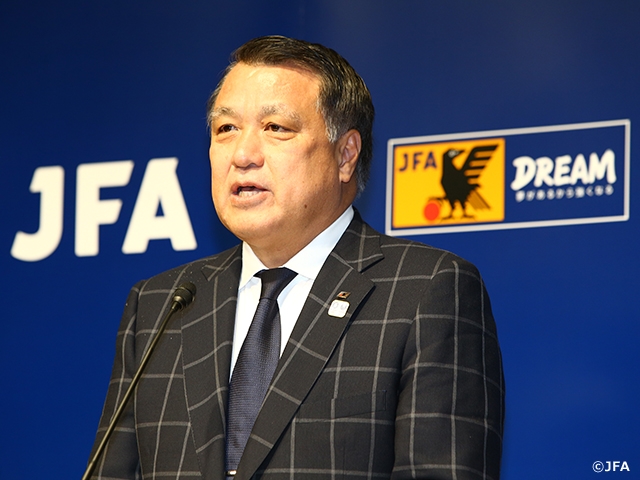 After his speech, the new emblem and the logotype for the national teams, the JFA organised tournament logo and their new name, and the standardised logo for all local football associations, were introduced on the screen. JFA’s General Secretary IWAGAMI Kazumichi expressed his expectation of this rebranding: 'We hope that we will show our new football to the world with this emblem.' He also commented about the JFA tournaments: 'I hope that the standardised logo will help promote that these tournaments are organised by the JFA and each of them is important in fostering Japan’s football.' 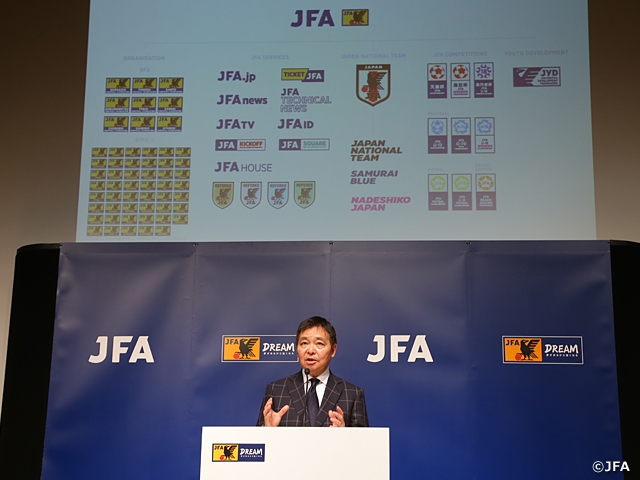 The new national team’s uniform with the new emblem will be used for the first time in the international friendly match, SAMURAI BLUE (Japan National Team) vs. Brazil National Team, on 10 November in Lille, France.

TASHIMA Kohzo, JFA President
I hope this rebranding promotes JFA staff’s awareness that they are an important part of the mission which leads the Japanese sport and the football in Asia and, at the same time, improves its governance with a sense of responsibility as well. I further expect that JFA staff will work hard to reflect the organisation’s vision and value in all of the activities and all the instructors, referees, and board members feel that they are also an integral part of the JFA.

SATO Ryuji, International Referee
JFA will celebrate its 100 Year Anniversary in 2021. There will be Tokyo Olympic Games in 2020 and World Cup in Qatar in 2022. My career as an international referee allowed me to feel the world-class competition on the pitch. Referring has given me the purpose, a sense of accomplishment and joy as well. I will do my best to continue my work as a reputable international referee in the world.

YAMASHITA Yoshimi, Women’s International Referee
This rebranding, which uses the same motif in the emblems for the referees and national team uniforms, gives me a feeling of unity across different branches of the JFA. It encourages me to keep working hard as a part of the JFA member as well.

KAWAMOTO Riyo (Shimizu S-Pulse Youth)
My ultimate goal is to win the World Cup. Winning the Prince Takamado Trophy All Japan Youth (U-18) Football League is one of the pathways to achieve that goal. For winning this title, I will continue my hard work as well.

TOMIOKA Chihiro (JFA Academy Fukushima)
I have seen the new logo of the Empress’s Cup for the first time today and I thought that the tournament has changed, while I felt the history of the competition at the same time. In the Empress’s Cup in which we currently play, we have a chance to compete against one of the top teams from the Nadeshiko League Division 1. We are looking to challenge them to see how well we can play against the top flight teams in Japan.

SAWA Homare, Former Player of Japan Women’s National Team
Since I was a little child, I always had a dream to become a national team player. Indeed, it was special thing to be a part of the national team and put on the uniform with the national team emblem. This is only for the selected few. Wearing the national team uniform was always special to me which made me excited, but with a strong sense of responsibility as well. I hope that many players will also experience the same feeling as well.