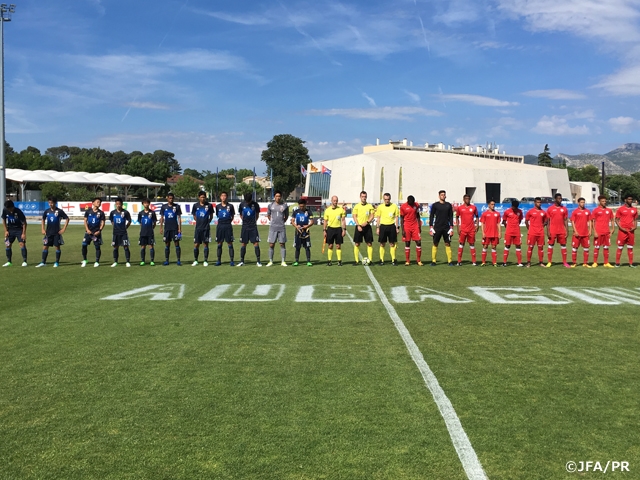 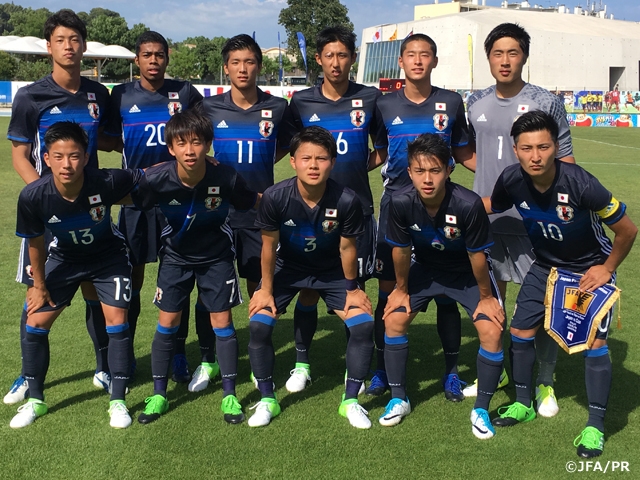 The 45th Toulon Tournament 2017 saw its commencement on Monday 29 May, and U-19 Japan National Team faced tournament newcomers U-20 Cuba in their first match of the competition at ‘Stade De Lattre’. The following match venue was the exactly the same stadium where the U-23 Japan squad played their opener in the previous tournament. With low humidity of 10% but high temperature of 29℃, the game kicked off under scorching sun.

U-19 Japan survived an early scare in the very first minute of the match. After losing the ball in the middle, the opponents broke through the left side to send a cross to the centre. The header inside the box missed the target, but it was a nervous start for the young Japanese. After a while, Japan regained composure and began to exchange better passes. Then subsequently, ITO Hiroki made the first attempt at goal from range in the 5th minute.

The Japanese squad started to perform much better and created several scoring opportunities as they started to steal the ball in the opponents’ end with high pressing and initiated effective attacks by stringing passes swiftly. However, their chances were denied by the fine saves from the opposing goalkeeper to end the first half in a scoreless tie. 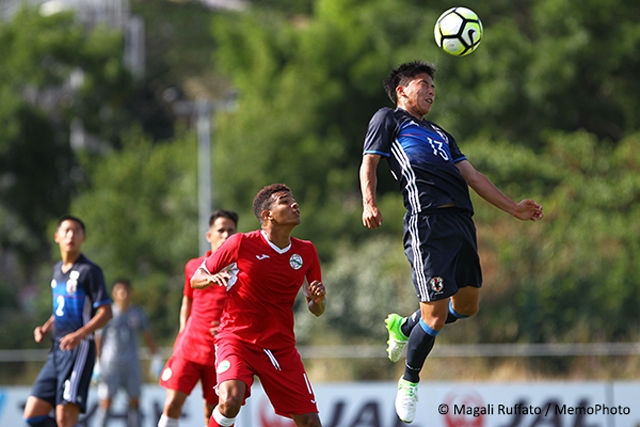 Second half started in a similar fashion as Japan dominated the match and searched for their first goal just as they did before halftime. In the 48th minute, TANAKA Kosuke surged up the right side on the overlap to deliver a cross in the centre, where KOMATSU Ren fired at goal with a bicycle kick, but his shot did find the target. On the other hand, the young Cubans looked for their chances to score from sending long balls on the counter, but the Japanese side defended solidly and did not allow the North Caribbean counterparts to make any threatening finishes to break the tie.

The awaited goal came for the Japan in the 55th minute. A right cross from MIKUNI Stevia Egbus was once cleared by the opposing defender, but Ito got to loose ball first and fired a superb right-footer from range to open the scoring for his side. Thereafter, two Japanese forwards, substitute ANDO Mizuki and Komatsu, had several scoring chances, but failed to stretch the lead for their team. Then the tragic moment came in the 72nd minute, when the opponents exploited the open space behind the Japanese backline with a long ball and their striker composedly ceased the one-on-one opportunity with the goalkeeper to slot an equaliser into the net.

In search for a game winner, the young Japanese internationals continued to attack, but lacking the finishing touch to convert those chances into a decisive goal, were held by the Cubans to a disappointing draw in their tournament opener.

KAGEYAMA Masanaga, Coach (U-19 Japan National Team)
Looking back at today’s game, we missed out on the key aspects of winning the game—we failed to convert our chances, but gave away easy chances as we did when the opponents scored. Before the game, I advised my players that in the international competitions such as the one we are competing now, we simply cannot allow the opponents with stronger physicality to overpower us. We need to be tough and be ready to face toughness more than what we are accustomed to doing so. I believe my players fought hard throughout the game. However, we did not display our style of football and string passes effectively to control the match. This is something we need to address in training. We still have few more games left, and will fight each game and put all our effort to win every one of them. I hope each game in the tournament will improve the team as well.

DF #6 TATSUTA Yugo (Shimizu S-Pulse)
I realised how the game can turn against us when we fail to convert our scoring chances. Talking about myself, I only played the first half, and despite the limited time I had, I still believe I displayed my strength on the pitch. However, I regret that I couldn’t contribute to the team’s win. We have our next match with only two-day break, and need to refresh ourselves and try our best to win the coming game.

FW #11 KOMATSU Ren (The SANNO Institute of Management)
I was invited for the national team for the first time in this tour, and I am over the moon that I can participate in the international tournament wearing the Japanese jersey. We were looking to win the first match, and it was regrettable that we missed our chance to secure a victory today. I was given the chance to play for the entire game, but wasn't clinical enough to contribute to the team’s attacks by scoring goals. Regardless of the opponents, I will work hard to display my strength on the pitch and contribute to the team’s win by scoring in the remaining matches.

FW #9 ABE Hiroki (Kashima Antlers)
In the game today, I concentrated on scoring goals as well as high pressing to bring that extra bit of quality to the team’s offence and defence. I had plenty of chances, but I regret that I lacked the finishing touch to score goals. There is a massive difference between converting those chances and failing to cease those opportunities. As a forward player, I will put even stronger emphasis on scoring in the coming game and contribute to the team’s win as well.