Discussions surrounding the WE League held at the Women's Leadership Symposium 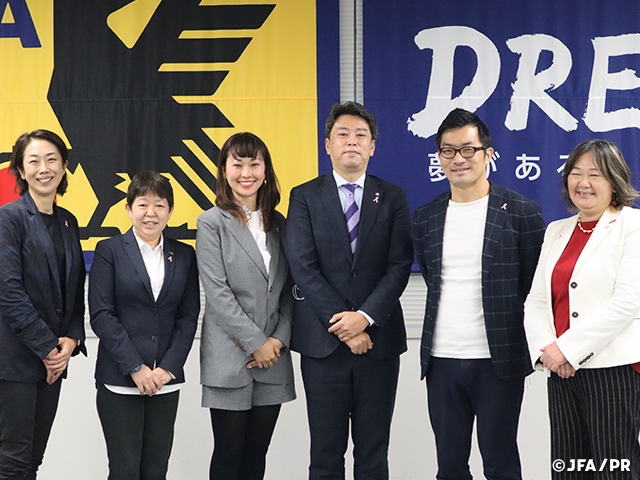 As a part of the “2021 JFA/WE League Women's Leadership Programme,” which has been taking place since June, the Women's Leadership Symposium was held on Monday 25 October. With Josai University’s Professor YAMAGUCHI Rieko serving as the facilitator, Sanfrecce Hiroshima Regina’s Director KUBO Masayoshi, AC Nagano Parceiro Ladies’ Director KATO Kumiko, who is also a graduate of this leadership programme, Executive Officer OURA Seiya of Persol Career Co., Ltd., a Silver Partner of the WE League, and WE League Director and Head of Philosophy Promotion Department Ms. KOBAYASHI Miyuki, discussed the theme of “the significance of women's football and the value of the WE League.”

After a speech was given by WE League's Chair OKAJIMA Kikuko and a special keynote speech given by FIFA Chief Women's Football Officer Ms. Sarai BAREMAN, a panel discussion was held among the speakers. With Sanfrecce Hiroshima Regina and AC Nagano Parceiro Ladies both joining the WE League, which kicked off on Sunday 12 September, Mr. Kubo and Mr. Kato each talked about the reasons for joining the WE League, while Mr. Oura of Parsol Career explained the reason for becoming a Silver Partner, “The WE League was the only platform where we could share and carry out our own worldview.”

When topics of the philosophy of the WE League and the philosophy promotion day were discussed, Mr. Kubo mentioned, “Although philosophies are important, it cannot be conveyed unless it is accompanied with legitimate activities. I believe that we can only spread our philosophy by involving the men's team and the community.”

During the discussion on the potential for the development of women's football, Ms. Kato expressed her hope that “if the players’ behaviour catches up with their professionalism, we can expect greater things happening.”

From the standpoint of a human resource service company, Mr. Oura pointed out that "professionalisation will create a second career problem for athletes,” and continued to mention that the league can become a platform that children can strive for with peace of mind, only if the players and the league work together to solve these issues. 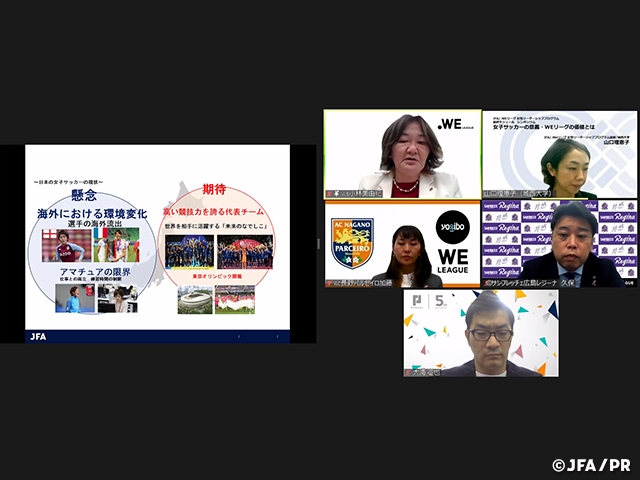 Comments of the participants

KUBO Masayoshi, Director of Sanfrecce Hiroshima Regina
I think it is important that we share and build up the programme together. We also need to keep this enthusiasm going and constantly come up with new ideas in order to further develop the programme, so we hope to have this kind of opportunity again.

KATO Kumiko, Director of AC Nagano Parceiro Ladies
As a graduate of this programme’s first class and a person who knew nothing about football, I am amazed by how many connections I made, and how much the second year students care about the WE League and football. I have high expectations for the WE League and hope to create teams that the fans will want to grow together with.

OURA Seiya, Executive Officer of Persol Career Co., Ltd.
We hope that this initiative will lead to a sustainable project that can promote and realise diversity, inclusion, and equality throughout Japan. There are many people in the general corporate world who have high hopes for the women's empowerment movement, and we hope that this programme will be the catalyst that leads to a Japanese society where the ideals of the WE League are realised.

KOBAYASHI Miyuki, Director of WE League and Head of Philosophy Promotion Department
With the addition of 12 new members, we now have 24 members of this Leadership Programme, and I think it is important that we continue to challenge new things, increase the amount of enthusiasm, and pass it on to the next generation. By have more people involved in this initiative, we hope to create a society where each and every individual can shine.

YAMAGUCHI Rieko, Josai University Professor
I would like to continue discussing with many people in the future. We still have a lot of work to do, but now that we have started, we have no choice but to move forward. 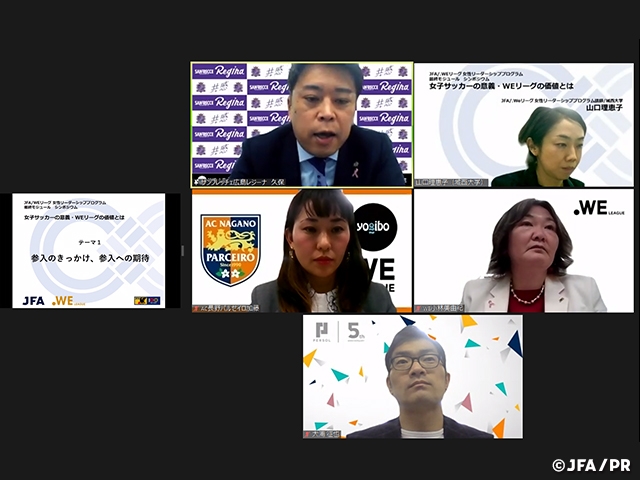