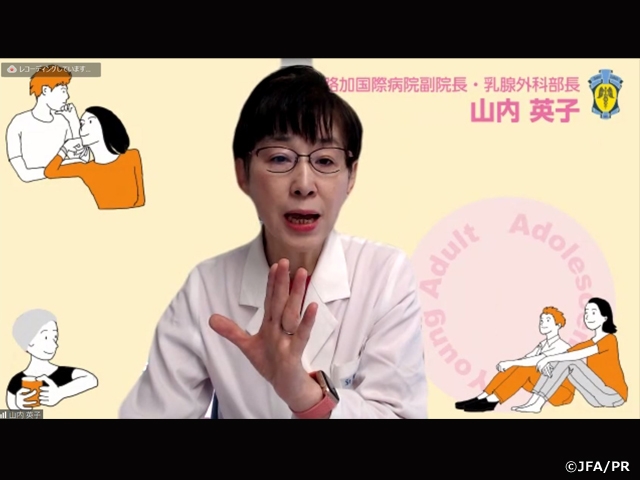 As part of this effort, an online breast cancer study session was held for teams and female referees from the WE League and Nadeshiko League on Thursday 21, which attracted 562 participants. Members of the Nadeshiko Japan, who were in training camp, watched a video of this study session on a different day.

Dr. YAMAUCHI Hideko from St. Luke's International Hospital (Deputy Director/Chief of Breast Centre & Breast Surgery Department) was invited as a lecturer for the study session, as she lectured about the basic knowledge of breast cancer, the actual status of the screening process, and various treatment methods.

Referring to the age of the athletes, Dr. Yamauchi explained, “When looking at the types of cancer diagnosed among Japanese women, breast cancer ranks number one with 21%, and when women in the 15-24 and 25-39 age groups are diagnosed with cancer, there is a high probability of it being breast cancer.”

In response to the results of this survey, Dr. Yamauchi expressed her surprise, saying, “Although the players are not in the age group that needs to undergo the population-based screening recommended worldwide, I was surprised by the number of people who has underwent screening for breast cancer.”

She also explained what breast cancer screening is, the advantages and disadvantages of undergoing the screening, and suggested that the players learn the following “Breast Awareness.”

1. Know the condition of your breasts.
2. Watch out for changes of your breasts.
3. Consult a doctor as soon as you notice any changes.
4. Get screened for breast cancer every two years after turning 40.

Dr. Yamauchi urged the players, “The 10-year relative survival rate is as high as 97.6% when breast cancer is in its early stages. Therefore, I would like you to detect breast cancer at the early stage of its progression.”

At the end of the study session, members of the football family who lost family members to breast cancer shared their real-life experience to the participants. The players listened closely to deepen their understanding of breast cancer, as they realised that breast cancer is not just someone else’s business. 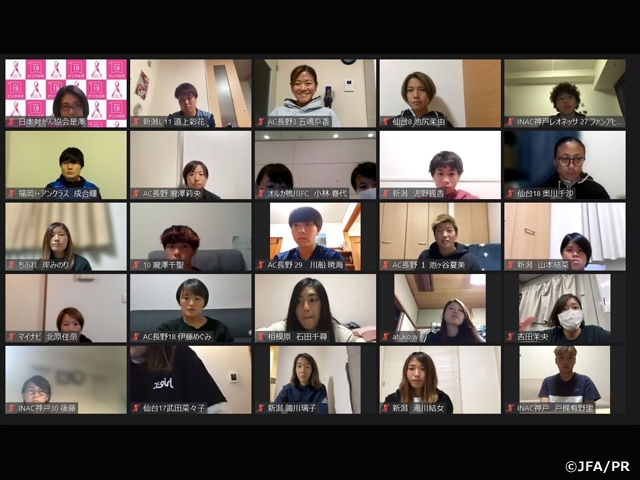 SHIMIZU Risa, (Nippon TV Tokyo Verdy Beleza)
This study session made me think about taking daily care of myself, my family, and relatives, and reminded me of the importance of getting routine medical check-ups.

TAKAHASHI Hana (Mitsubishi Heavy Industries Urawa Reds Ladies)
I had heard about breast cancer and medical check-ups, but I had never really thought about it, so this session was very informative. I would like to be more conscious of my health from now on because I have learned that health check-ups and self-examination can lead to early detection.

FUNADA Mayu (Chifure AS Elfen Saitama)
I am glad that I was able to participate in this study session because it is not often that we have the opportunity to hear such in-depth and easy-to-understand explanation of the risks surrounding us. As mentioned by some of the cancer survivors, there is a tendency to avoid the topic. However, I felt that facing and knowing my own body could lead to early detection. And I thought it was something that I need to share with other people around me.

ARASHIRO Mitsuki (Okayama Takahashi Charme Kibi International University)
Getting cancer is scary, but I realised that leaving it untreated is even scarier. I felt that we need to summon the courage to go to the hospital and take action immediately when realising anything unusual. If someone close to me has these symptoms, I would like to be able to talk to them and be there for them.

MATSUYAMA Yume (Ange Violet Hiroshima)
Before attending this workshop, I thought I had nothing to do with breast cancer. However, I felt that it was important to know about breast cancer not only for myself, but also for my family, friends and other people close to me, so I would like to share what I learned in this study session with my family and friends.

AMANO Tsukasa (INAC Kobe Leonessa)
Since we are a women's team, I felt the need for the league and teams to take the initiative to conduct screenings. As a trainer, I need to deepen my knowledge not only about menstruation and injuries, but also about internal medicine such as breast cancer.