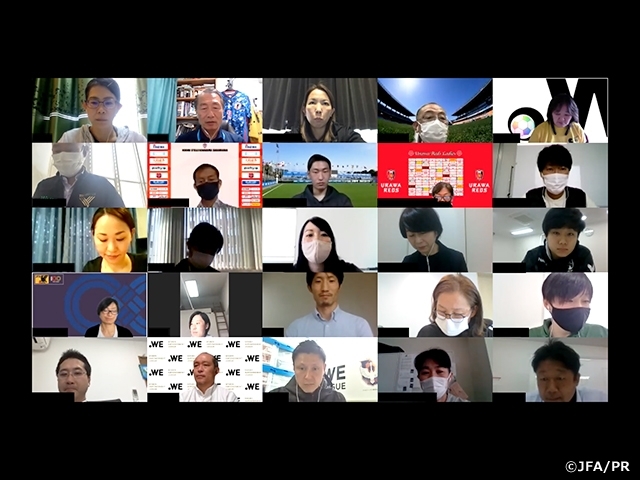 “Welfare” refers to the health, happiness, and fortunes of a person or group. The "Welfare Officer" is responsible for providing safety and security of football families who enjoy football and building a more comfortable football environment. Instead of giving disciplinary punishment for unfavourable behaviour, welfare officers are there to communicate their awareness to tehri peers to promote the creation of an environment where everyone can enjoy football with peace of mind.

We hope that the spirit of respect will spread not only on-the-pitch but also off-the-pitch and will permeate from the football field to our everyday lives. welfare officers (General) have already been assigned to each prefectural football association, and they are engaged in various activities to promote welfare.

The JFA Respect / Fair play Committee has set “enhancement of welfare officer activities” as one of the priority items to be tackled in 2021. Here we will introduce some of the new activities carried out by our members to spread the spirit of respect.

We will first introduce the initiative taken by the WE League (Japan Women's Professional Football League). The WE League has established the “WE League Philosophy Promotion Department,” and they have decided to appoint welfare officers to all clubs of their league, in order to realise one of the league’s visions, “creating the best league value in the world.”

On 30 March 2021, a Welfare Officer Refresher Course was held online towards the WE League and clubs belonging to the WE League. 22 people from the league administration and clubs of the league participated to learn the fundamental understanding of respect and various matters that involves the clubs and welfare officers.

During the discussion part of the refresher course, we went through case studies that are likely to occur especially in women’s football teams, to cover the issues that involves the players’ safety and security, while raising specific examples of harassments to deepen the participants’ understanding about welfare. While listening to the enthusiastic discussions held by the participants, I felt that each club will be able to further improve their environment, as long as the activities of the clubs and welfare officers will continue to function properly.

The WE League, which starts in September, consists of 11 teams, with one team having a bye-week each match-week. I have been told that teams without matches are planning on pursuing activities based on the league’s principles. Through the lively appearance of the people involved, both on and off the pitch, we hope to provide a positive wind to the entire football community.

Many discussions were also held during this course, but in addition to the scenarios of women's teams and primary school teams, discussions on “Match Welfare Officers” took place. Match welfare officers would communicate with coaches of each team before and after the match. The circumstance could vary from time to time, but communication is an essential component. We were able to see the consideration given by the officers, as they tried to pick the right moment to communicate with the coaches after matches. If you chose the wrong timing or words to convey your awareness, it may not reach the other person’s heart. A key element is that you do not convey the message condescendingly, but rather from the same standpoint as a fellow coach.

JFA coaches are active in various places, and their mission is not limited to coaching techniques, but to provide environments where players can enjoy playing football with peace of mind. It is very encouraging that the people who are the closest to the players will be the ones to promote respect to the players.

With the help of these new companions, we would like to improve the football environment by spreading the spirit of respect and increasing the number of people who understands the basic principles of welfare.

*This article was originally posted on Japan Football Association “Technical News,” May 2021 edition.