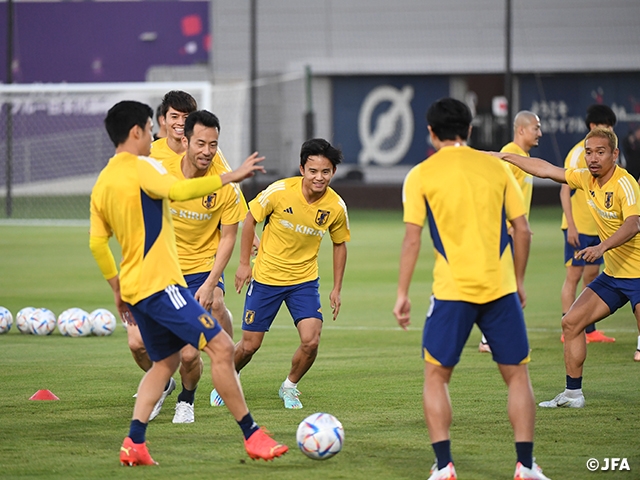 On Monday 21 November, two days before their first groups stage match against Germany in the FIFA World Cup Qatar 2022™, the SAMURAI BLUE (Japan National Team) held a training session at their base camp in Doha, where all 26 players participated.

The session was closed to the media for the third day in a row, with the exception of the first 15 minutes. The players were seen going through their warmup routines before engaging in agility and passing drills. MORITA Hidemasa (Sporting CP), who had been working out separately from the team until the day before, was also spotted working out with the group. 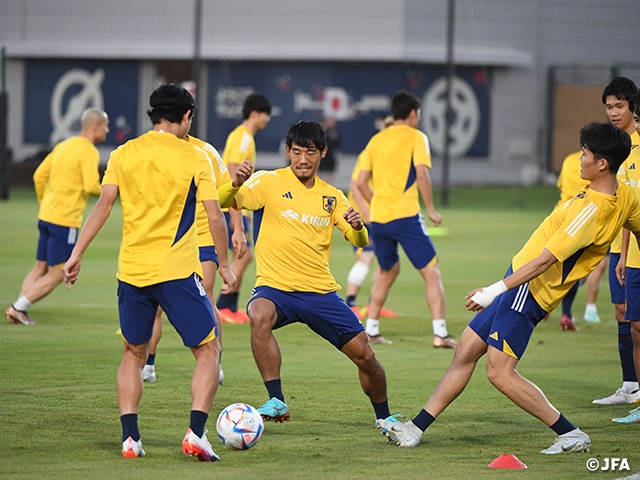 The three goalkeepers, KAWASHIMA Eiji (RC Strasbourg), GONDA Shuichi (Shimizu S-Pulse), and SCHMIDT Daniel (Sint-Truidense VV) were seen going over their own drills, as they repeatedly practiced catching crosses from the flanks.

The session then went behind closed doors, as the team went through their game plan for their match against Germany.

TOMIYASU Takehiro (Arsenal), who had concerns over his fitness, showed no signs of the effects of the injury, as he mentioned, “I was able to recover in time for the opening match.” The defender then went on to share his aspiration, “The first match is going to be crucial. We have prepared well so far, sorting out what we need to do. We want to keep our opponents scoreless as long as possible.” 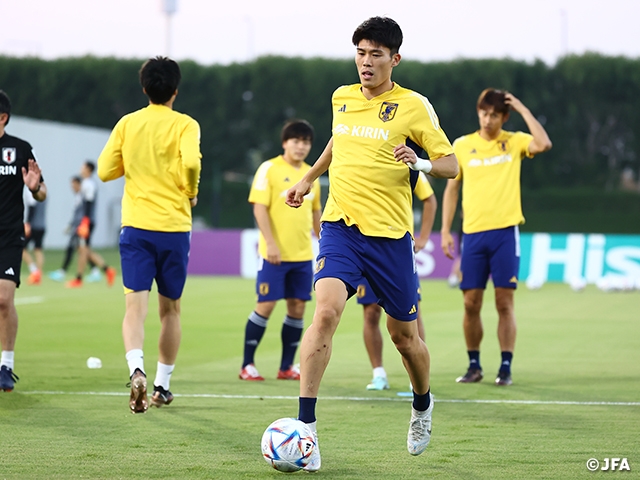 ENDO Wataru (VfB Stuttgart) also revealed that he has been completing the full training menu since Saturday, dismissing any concerns over the effects of the concussion he sustained in the league action, as he commented, “We want to be aggressive from the start. We just need to play with a challengers’ spirit against Germany.”

On this day, Mr. SEKINO Hiroyuki, who is in charge of stadium MC for national team matches in Japan, visited the training session, as FIFA invited each stadium MC from the participating countries to visit their respective teams.

Also on site was JFA President TASHIMA Kohzo, who commented, “I can tell that the players are fully determined to showcase their football, make a deep run, and reach new heights at this tournament, and I am truly delighted to see their enthusiasm.”

The 10 players of the U-19 Japan National Team who were scheduled to join as training partners during the tournament will no longer participate in the team's activities, as they will return home instead of travelling to Doha, after a positive case of Covid-19 was confirmed within the team during their tour in Spain. No replacement has been called up and the team will go into this competition without a training partner.

The SAMURAI BLUE will hold one more training session before entering their match against Germany on Wednesday 23.

FP #2 YAMANE Miki (Kawasaki Frontale)
I watched the first half of the opening match, and I got the impression that even the home side were being overwhelmed by the pressure, which reminded me once again that, “This is the World Cup.” In the match against Canada, because I was positioned towards the middle in the final play, I had to be more aware of my teammate’s positions, and I wish I played with a bit more composure. It reminded me that it is sometimes important to make the decision to trust your teammates and be more aware of your surroundings, because you have almost no chance when you give up a penalty. We are expecting a very tough match against Germany. Anything can happen in football, so we must be ready to fight through as a team. The pressure applied by Germany will be quite intense when we win the ball, so it's critical to understand how to avoid it and make the right choice when we win the ball. We will have to work closely as a team and try to make our plays automatic. The first match of the group stage is always important, so we will do everything we can to prepare for it.

FP #6 ENDO Wataru (VfB Stuttgart/Germany)
I have competed the full training menu for the past two days, and I felt fine, so I don’t think there is any problem. I think I have a good idea of where my teammates and opponents are after winning the ball, based on the way we defend and their attacking pattern, so I want to make a wise decision on whether to attack quickly or slowly, based on the situation and the time of the game. We don’t want to make it easy on our opponents, so we want to be aggressive from the start and try to possess the ball in the opponents’ half of the field. We also have to be decisive on our decisions to press forward or drop back. Personally, I am just focused on showcasing what I have been working on in the past four years. 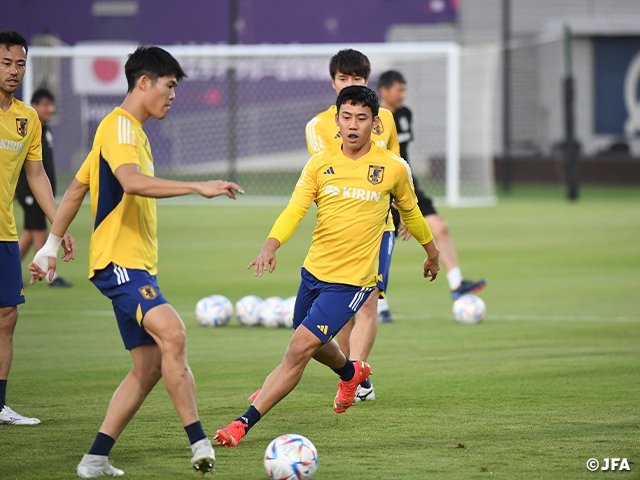 FP #10 MINAMINO Takumi (AS Monaco/France)
We are up against a strong opponent and just the fact that it’s my first World Cup is enough for me to be motivated. Personally, I feel very calm at the moment. We managed to carry out our trainings in a very positive atmosphere and everyone seem to have recovered from their injuries, so we should be able to enter the match against Germany in good shape. We need to be on the same page so that we know exactly where to pass the ball after winning the ball, and that is an area I hope to demonstrate when I am given the opportunity to play on the pitch. I think the team is in its best form in the four years since Coach Moriyasu took over and considering how everyone has been playing at their respective clubs, I think that could be said for the individual players as well. The team and players’ form is a crucial factor when competing in a short-term battle, so I think we are well prepared in that respect. We are up against a superior opponent, but we have nothing to lose, so we will enter the match with a challengers’ spirit. 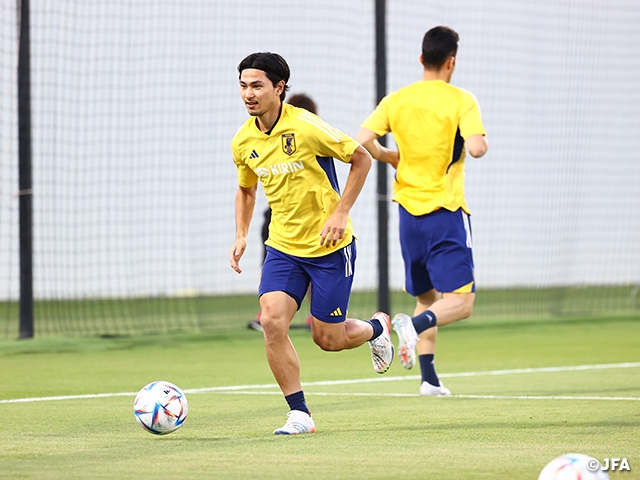 FP #16 TOMIYASU Takehiro (Arsenal/England)
We are fully aware of the importance of the first match, and despite being up against a very talented German side, we must focus on keeping the game scoreless as long as possible. Instead of worrying about our opponents, we must be aware of what we have to do. We have been able to prepare well leading up to this point and I am pleased with the way things are going. What we do after winning the ball is going to be a crucial factor. Although this team is well-suited for quick counterattacks, we need to assess each situation and make wise decisions. We also need to try to possess the ball in the opposing territory as long as possible, because we simply cannot defend for the whole 90 minutes. As I mentioned earlier, we have prepared ourselves well for this match, so we just need to keep our composure, make good decisions, and work together as a team.

FP #18 ASANO Takuma (VfL Bochum/Germany)
I personally was not able to showcase a good performance in our match against Canada, but it gave me an opportunity to improve my match fitness. I have continued to condition myself after the match, so I am fully ready to give everything I’ve got for the team. (After seeing Qatar and Iran lose their first match) It reminded us that there is still a gap between Asia and the rest of the world, particularly Europe and South America, but you never know what will happen in these tournaments. Technique, strategy, and quality are all essential, but at the end of the day, I feel that the team with the strongest spirit will always come out on top. In that sense, this team, including myself, have a strong desire to win, so I think we have nothing to be afraid of.

FP #24 SOMA Yuki (Nagoya Grampus)
I am just really fired up from the bottom of my heart. My job is to score goals and win the duels, and that remains the same regardless of who we face. We will be up against Neuer, who is a goalkeeper that can cover lots of ground, so I will make conscious efforts to keep my eyes on where he is positioned. The German players are physically very solid, but as long as I can avoid direct contact, adjust my timing, and use my body right, I believe I can cope with them. Nagatomo has taught me how to work on my conditioning in a way that suits me, and my body is moving very well, so I'm in good shape.