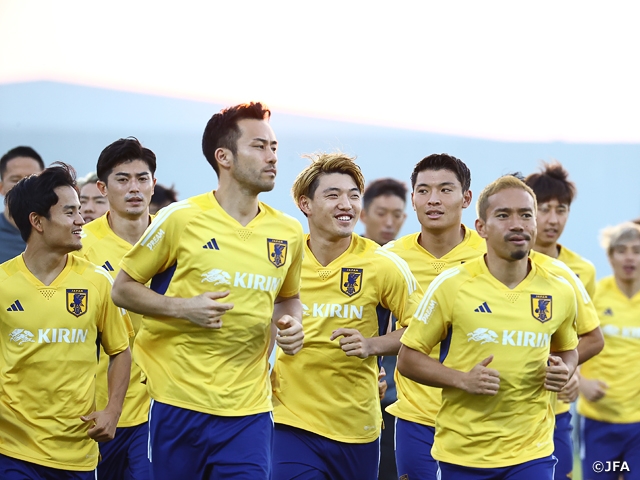 The SAMURAI BLUE (Japan National Team), who will be taking part in the FIFA World Cup Qatar 2022™, resumed training on Saturday, November 19, in preparation for their first group stage match against the Germany National Team, which is scheduled to take place in four days.

The team took a day off on the 18th before resuming their training at their base camp in Doha after their friendly match against Canada on the 17th, which took place in Dubai. The session was held behind closed doors except for the first 15 minutes, in which the players were seen going through their warmup routines.

Both ENDO Wataru (VfB Stuttgart) and MITOMA Kaoru (Brighton & Hove Albion FC), who were left out from of the squad for the match against Canada due to injury and illness, participated in team drills from the start. Despite concerns about the effects of the concussion, Endo was seen chasing the ball with a cheerful expression on his face, along with Mitoma, who had recovered from his illness. Due to discomfort in his left leg, MORITA Hidemasa (Sporting CP), who was also ineligible for the friendly, trained separately from the team. 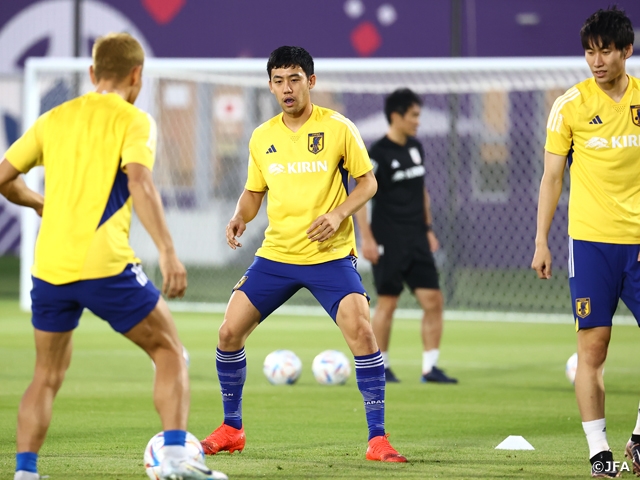 A cart equipped with a monitor then appeared on the pitch, which allowed the players to review their movements for each drill. The session then went behind closed doors as the team went over their tactics for the match.

NAGATOMO Yuto (FC Tokyo) commented after practice, “Losing to Canada has given us a sense of urgency, which is a good thing. Everyone is talking to achieve the same goal.” The veteran defender who has participated in three World Cups commented on the fact that more players are gaining international experience at the club level, including the UEFA Champions League, saying, “They are used to playing under intense pressure, which enables them to see the big picture, even though they are playing in their first World Cup. The team is benefiting from their confidence.”

In regard to the team’s first match against Germany, DOAN Ritsu (SC Freiburg) expressed his confidence, saying, “We are not afraid of them, and I think we can go toe-to-toe with them.” Referring to his missed opportunity against Ecuador in September, he added, “I have worked on my shots for a month with that image in my mind and prepared myself for the World Cup. I am confident that my efforts will pay off.”

On this day. the 26 players participated in a team photo shoot in front of a sizable gathering of media, which had grown significantly since the team's trip to Dubai. The team chef, NISHI Yoshiteru, appeared during the photo shoot wearing the team uniform and posed in the front row of the group shot, which generated laughter and a warm atmosphere. 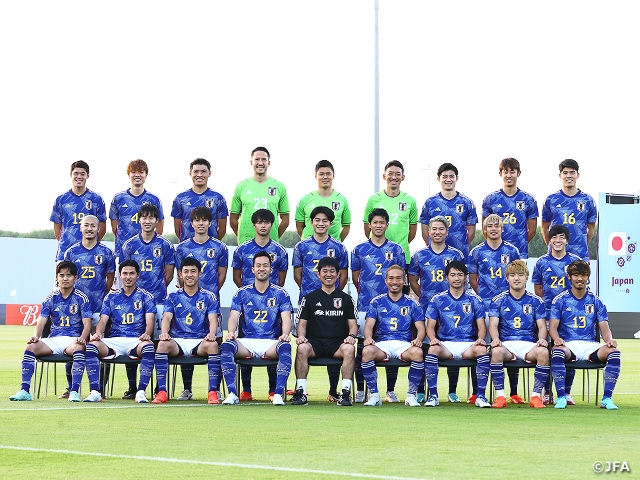 Starting from this day, the team has set their training sessions to start at the same time as the kick-off time of their match against Germany. The team is stepping up their pace to get ready for the big game, with the majority of the session taking place behind closed doors.

The tournament, the first in the history of the World Cup to be held in the Middle East, kicks off on Sunday 20 November, with 32 teams competing for the world's top spot until the final on Sunday 18 December.

Aiming to reach the top eight and beyond for the first time in their seventh appearance, Japan will face Germany on Wednesday 23 November, Costa Rica on Sunday 27 November and Spain on Thursday 1 December in Group E. The top two finishers in each of the eight groups will advance to the knockout stage.

GK #23 SCHMIDT Daniel (Sint-Truidense VV/Belgium)
With the match day getting closer, our trainings are becoming more game-like, giving us a sense of urgency ahead of our match against Germany. It felt like the spaces behind our defence line were getting exploited more than usual facing Canada, which is something the defenders and goalkeeper need to discuss to be on the same page. We must take good care of those spaces because Germany will certainly be looking to penetrate those areas. We also need to make sure of our roles when defending against set-pieces, remember to put our body against the opponents to prevent free headers, and respond to the deflections. We must gear up and step it up a notch, so that we can enter our first match in good shape.

FP #5 NAGATOMO Yuto (FC Tokyo)
We have been carefully examining the footage of Germany and talked about the issues we had in our match against Canada. The players who play in Germany seem to be relatively confident than the other players and the team is benefiting from their confidence. Japan has gotten stronger since losing to Belgium in the previous World Cup, and this is the tournament to prove it. No matter how well we train tactically and technically, the World Cup ultimately comes down to mental toughness. I've learned from the last three World Cups that strategies and tactics are useless without the willpower to put them into action. In order to make the most of what we have built up over the past four years, we must approach the competition with a strong spirit and mental toughness.

FP #8 DOAN Ritsu (SC Freiburg/Germany)
In order to work on all the details of the game in preparation for the first match, I think it's necessary to practice behind closed doors and to sharpen our minds in the three or four days leading up to the match. Having played in the Bundesliga myself, I know the characteristics of many of the opponents, including the two Freiburg players, so I've given my opinion and shared everything I have to help Japan win. Canada consisted of players with great physicality and athleticism, and although the German players are as physical, they are not as agile as the Canadian players. We are not afraid of them, and I think we can go toe-to-toe with them. Considering how much I've improved over the past few years, I'm not concerned about my defensive game either. I will do my best to condition myself, so that I can play to my strengths from the first match.

FP #14 ITO Junya (Stade de Reims/France)
I wasn't really thinking about tomorrow's opening match, but it does feel like the tournament is finally underway. We’ve decided to watch the match together as a team. We also held a meeting to go over our tactics for our Germany match. Although they play completely different style of football, we are trying to make the most of the experience we gained from playing Brazil in June.

FP #17 TANAKA Ao (Fortuna Dusseldorf/Germany)
The biggest concern was my fitness, but I think it is getting better now that I've played a match against Canada, and I think my game intuition will follow as well. As the first match draws near, there is undoubtedly a lot of tension, but all I can do is give it my all. I'm trying not to think too much about the fact that I'm playing for my country because you can't perform well if you're too preoccupied with that idea. Instead, I try to focus on the fact that I can only help the team if I have fun on the pitch. In order to win the ball, we need to create as many one-on-one situations as possible, so it is crucial that we give directions from behind to create those situations.

FP #22 YOSHIDA Maya (FC Schalke 04/Germany)
We feel calm at the moment but gradually building up a sense of urgency. Since arriving here, we have had wholesome meals, adequate nutrition, restful sleep, and attentive care. We are going to raise the intensity level of our trainings and try to get ready for our match. There were some players who were not able to travel with us to Dubai, but I am sure they have watched the match and I think it is definitely important for us to get on the same page as a team. We will brush up on our approach to the game. We need to discuss what we would do against Germany and fine-tune our general plan of where to apply pressure and how to possess the ball.

FP #25 MAEDA Daizen (Celtic FC/Scotland)
The first match is approaching, but I feel surprisingly relaxed. The tournament kicks off tomorrow and I expect things to get even more tense as we get closer. My condition is not bad and the atmosphere in the team is the same. While I was watching the Canada match, I tried to visualise the moves I would make if I were on the pitch. I was considering exploiting the space behind the defence line to create chances to score because there were openings there. I also visualised how I could assist the team in coordinating our defensive approach by acting as a switch. Although I consider my ability to play defence to be part of my strong points, I believe that forwards should also be able to score goals, so I'd like to be able to improve my offensive game in addition to my defence. I believe that every player thinks they are capable of playing in any position. Given that we will be playing several matches within a short period of time, I believe it is crucial that the players be prepared to fill any position that may be requested.