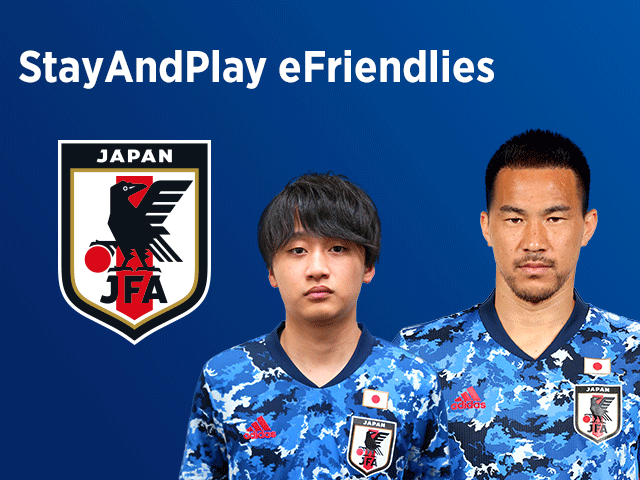 JFA has announced the details of the e-International friendly match “StayAndPlay eFriendlies.”

Following the cancellation of the “FIFA eNations StayAndPlay Cup,” it was determined that the “StayAndPlay eFriendlies” was going to be held between four Asian countries/regions. The tournament will take place between Tuesday 21 and Saturday 24 April, where four teams will compete in a round-robin league competition.

With many football tournaments and events being cancelled and postponed, the tournament provides entertainment for football fans, where active football players (or public figures) form a tag-team with eFootball players to compete with other countries. Web Nasri will represent Japan along with JFA eSports Ambassador OKAZAKI Shinji. The tournament will partially incorporate the rules of FIFA eNations StayAndPlay Cup. The tournament details are as follows.

PlayStation®4 (Online mode of EA SPORTS™ "FIFA20")
“PlayStation" is a registered brand and trademark under the Sony Interactive Entertainment.

・Teams will consist 2 players.
・Each match will be played one-on-one, and the winner will be determined from the total points of two matches. First match will take place between the eFootball National Players, and the second match will be played by their country's public figures.
・Match points will be distributed as follows: 3 points for a win, 1 point for a draw, and 0 points for a loss
・If teams are tied in points, tie-breaker rules will apply in the following order: Goal difference/total goals scored/head-to-head record/coin-toss
・Match time will be set for 90 minutes. (roughly 12 minutes in real time)

*Starting time of the match can vary depending on the previous match. Please be aware that the 19:40 and 20:40 match can start 5 to 10 minutes earlier than scheduled.