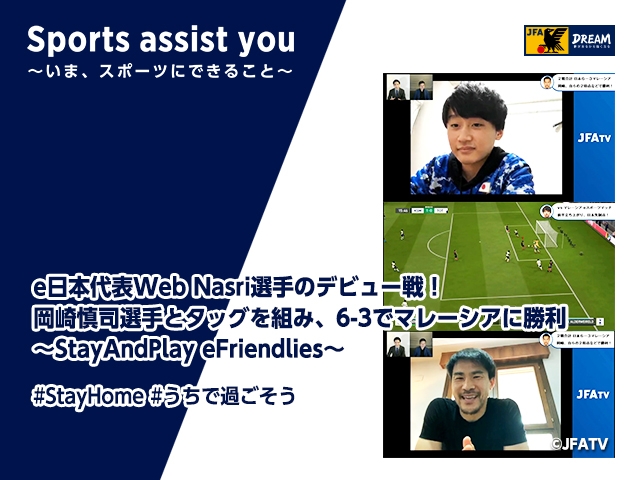 An eSports international friendly tournament, “StayAndPlay eFriendlies” kicked-off on Tuesday 21 April, where Web Nasri (Kashima Antlers), a member of the Japan eNational Team, formed a tag-team with OKAZAKI Shinji of SAMURAI BLUE (Japan National Team), who also serves as the JFA eSports Ambassador for this tournament, to face Malaysia.

“StayAndPlay eFriendlies” is an eSports international friendly tournament, where four countries; Japan, Malaysia, Chinese Taipei, and Singapore, compete in a round-robin format. With many football tournaments and events being cancelled and postponed, the tournament provides entertainment for football fans, where active football players (or public figures) form a tag-team with eFootball players to compete with other countries. At this tournament, each match will consist two legs, as the first leg will be competed among eFootball players, while the second leg will be played by active football players (or public figures) to determine the winner of the match in aggregate goals.

Japan faced Malaysia in their first match, where Japan eNational Team’s Web Nasri selected his own club Kashima Antlers, while his opponent selected Tottenham Hotspur from the England Premier League.

After taking the lead in the eighth minute, Web Nasri quickly doubled the lead in the 15th minute to make it 2-0. Web Nasri displayed his dominance over his opponent as he kept 67% of ball possession in the first half. The second half saw the Malaysian player make an effort to rally back, but Web Nasri showcased a solid performance to keep a clean sheet to win the match 2-0. Following his victorious first leg, Web Nasri passed the baton to Okazaki, as he mentioned, “Yesterday I gave him advise on defence, so he should be able to win without a problem.” 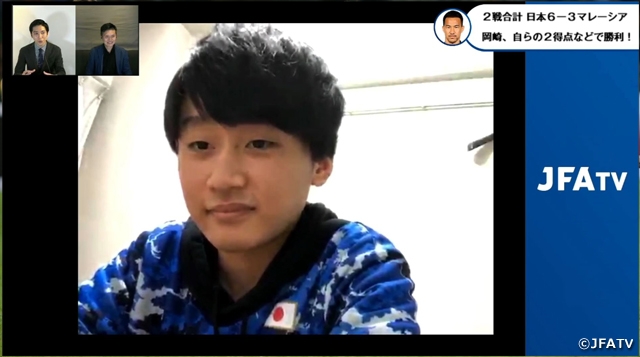 With Japan leading the match 2-0, Okazaki selected his own club SD Huesca, while his opponent, Safawi RASID from the Malaysia National Team, selected Leicester City from the Premier League. The match between two strikers kicked-off as Okazaki later reflected, “My hands were shaking, and I wasn’t able to play as I intended.” With Okazaki struggling to find his rhythm, Rasid scored the first two goals to tie the match in aggregate goals. However, after converting a penalty kick, Okazaki picked up the momentum to rally back and won the match 4-3, as he controlled his own self in the game to score two goals, as he later revealed, “It wasn’t shown on screen, but I was super excited!” As a result, Japan won the match with an aggregate score of 6-3. 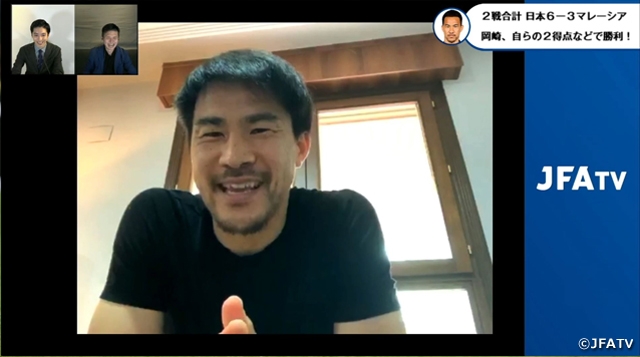 Following the match, Web Nasri was asked for an advice to Okazaki, as he replied, “If he can come back from a two goal deficit, I probably don’t have anything to teach him.” But the eFootballer continued by saying, “But all jokes aside, I will send him an e-mail to go over today’s match.”

Japan will face Chinese Taipei on Wednesday 22 at 20:00, and Singapore on Friday 24 at 19:00. Please support Web Nasri and Okazaki from home!

Web Nasri (Kashima Antlers)
I was really happy when I scored that early goal. It really allowed me to settle down and take more risks in offence, which led to that second goal. With Mr. Okazaki lined-up to play the second leg, I focused on keeping my composure to win the match. I only gave up one or two shots throughout the match, and I feel like I was able to display a solid performance overall. It got me worried when we conceded two goals in the second leg, but Mr. Okazaki showcased a fantastic performance to score many goals after that, so I had fun watching the match. We hope to carry this momentum into the second match to mark consecutive wins.

OKAZAKI Shinji (SD Huesca/Spain)
My hands were shaking, and I was not able to play as I intended. It is something I have never experienced before, and it made me realise that I can get that nervous. I was able to find my composure following that penalty kick. I made an offensive substitution which turned out to be highly effective, so I am glad I made that change. There were many scenes that liked with real-life matches and eSports allows us to showcase our game minds through these games. Intentionally or not, my opponent chose Leicester City, which is a team I played for four years and I have many memories with the club, so I am glad that the Okazaki I was controlling was able to score two goals against them. The actual team strategies utilised at Huesca might have been effective in this game as well, so I will do more simulations to improve my game.