On Thursday 11 July, the Japan Universiade National Team faced the host nation, Italy, at the semi-finals of the 30th Summer Universiade Napoli 2019 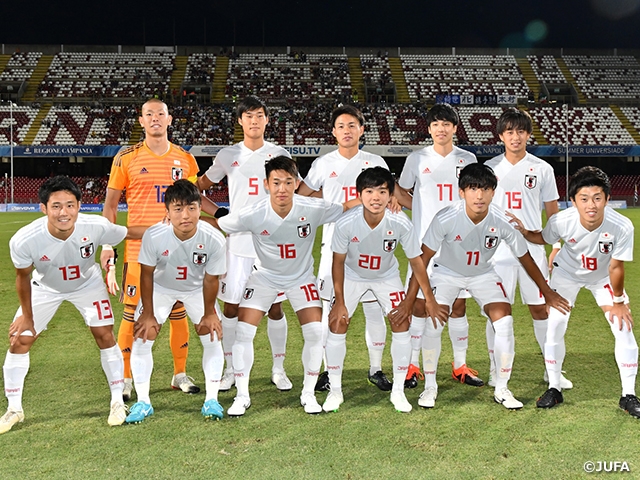 Despite showing great intensity to start off the match, Japan gave up the opening goal to Italy in the 24th minute, when they conceded an own goal following a corner kick. After giving up the lead to their opponent for the first time in this tournament, Japan responded in the 28th minute, when OGASHIWA Tsuyoshi received the ball from KANEKO Takuro and penetrated the penalty area from the left side. His final cutback connected with KODAMA Shunto, who made a sliding effort to score the equaliser. Ogashiwa almost gave Japan the lead in the 43rd minute, when he struck a powerful shot from distance, but his attempt sailed over the cross bar. Italy also created consecutive opportunities towards the end of the first half, but the Japanese goalkeeper ABE Koto made fine saves to keep the score tied at halftime.

Similar to the first half, it was Japan who took the initiative to start off the second half. In the 58th minute, Ogashiwa responded to a long feed delivered by AKIMOTO Takahiro and broke into the open space, calmly converting a one-on-one against the goalkeeper to give Japan the lead. Four minutes later, Kaneko followed with an excellent midrange shot to double the lead for Japan. With the two-goal lead, Japan brought in NAKAMURA Hotaka in the 68th minute, followed by MORISHITA Ryoya in the 77th minute to secure their lead. However, Italy got within a goal after capitalising on a free kick in the 79th minute, and with the home crowd supporting their back, Italy gained more momentum in their offence. Japan had their chance to seal the match, when Ogashiwa and Morishita both faced a crucial opportunity in the 84th and 85th minute respectively but fell short in both occasions to extend their lead. In the fourth minute of additional time, Japan was called with a hand ball committed inside the penalty area. Italy successfully converted the spot kick to equalise the match in the final seconds of the match. Due to tournament regulation, the match entered directly into penalty shootouts to determine the winner of the match.

After each team missed one attempt apiece, Japan’s sixth spot taker Morishita calmly converted his kick, while Italy’s sixth kicker struck the post. As a result, Japan advanced through to the final for the second straight tournament.

The Japan Universiade National Team will face Brazil in the final on Saturday 13 July at 21:00. Japan will seek to earn back-to-back gold medals, which will be their seventh overall title at the Universiade.

MATSUMOTO Naoya, Coach (Momoyama Gakuin University)
After winning a close match against Korea Republic at the quarterfinals, we faced Italy at the semi-finals. With the match being held in a completely away situation, we expected the match to be a very difficult one. Similar to Japan, Italy also rotated many of their starting players in this match, which made it a bit easier for us in some respects. We managed to possess the ball very well and it was great to see our offence score three goals. Ogashiwa demonstrated how small and agile players can utilise their character to their advantage. We knew Italy was capable of scoring goals from set-plays and long balls, so we were fully alerted against those plays, but we ran out of gas and failed to respond towards the end of the match. The last penalty we gave up was something out of our control, and our players did well to fight through the penalty shootouts. With both teams playing four matches leading up to the final, the total team effort will be tested in our next match. Fortunately, we don’t have anyone suspended nor do we have anyone injured. This will be the final match for this team. We will prepare ourselves one last time before the next match and strive to win the title as a team.

GK #12 ABE Koto (University of Tsukuba)
After yesterday’s training session, we told each other that we wanted to win the match before entering penalty shootouts, but unfortunately it didn’t go the way we wanted. I feel guilty about the goal we conceded, but I am relieved that we have advance through. The cheers and booing from the crowd didn’t bother me and I feel like I was able to stay focused throughout the match. However, we need to review and improve on our game management, especially after being up by two goals at 3-1. The defenders including myself had to give out more directions to keep the team on the same page. I personally feel more confident playing defence in an away game, and it helped me enter the match with high intensity. I am glad that we were able silence the crowd by winning the match at the end.

MF #20 KODAMA Shunto (Tokaigakuen University)
I don’t remember the details of the play where I scored the goal, but I saw Hayashi blocking the path for me and my body just reacted to the ball. I have never scored a goal like that before, so I feel like it was something out of my character. At the same time, the first goal we conceded was from a corner kick I gave up from my own mistake, so was looking for my opportunity to pay back for the team. We have been facing bigger players at this tournament, so I have been focusing on making plays that utilises our characters. This is not an individual competition, and our team has shown great teamwork throughout the tournament. That is why it means a lot for us to win matches like today. We hope to finish off the tournament with a win and celebrate the title as a team.

FW #13 OGASHIWA Tsuyoshi (Meiji University)
When facing foreign teams, I feel like we have the advantage in terms of agility. Following our match against Russia, I started to gain confidence that I can penetrate the flanks with my speed, and knowing we have players who can convert the crosses, I focused on making runs down the line to send crosses in today’s match. Before I scored the goal, I was talking with Akimoto to make plays that exploits the space behind the opposing defenders. Akimoto delivered a pass just as we planned, so I just had to utilise my speed to break through. I am glad that I was able to keep my composure to convert the one-on-one against the goalkeeper. We have faced our next opponent, Brazil, in a training match prior to this tournament. Although we have won that match, I am sure that they will be coming out as a totally different team when we face them at the final. All of our efforts will be wasted if we lose tomorrow, so we will stay focused and give our very best efforts to win the title.