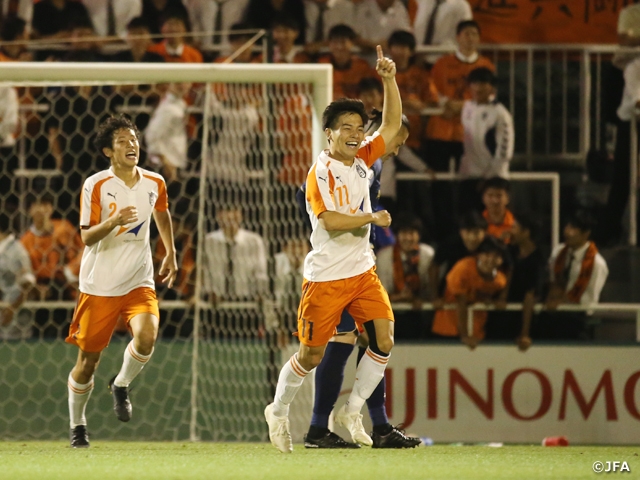 On Wednesday 10 July, the remaining three second round fixtures of the Emperor's Cup JFA 99th Japan Football Championship took place to determine the 32 teams advancing to the third round.

At Ajinomoto Field Nishigaoka, the fixture between Hosei University (seed) and Tokyo Verdy (J2) took place, where the match saw the university side taking the initiative through their aggressive pressure and quick ball movements. Hosei collected the ball to their lone striker MATSUZAWA Akira to construct their attacks, while the midfielders used the width of the field by sending through balls for HASHIMOTO Riku to penetrate the right flank. Following the 20th minute mark, Hosei created numbers of opportunities that threatened the opposing goal, forcing the Verdy goalkeeper to make fine saves.

On the other hand, Tokyo Verdy struggled to connect the ball under the intense pressure applied by their opponents. Their attempts to utilise the height advantage of Nemanja KOJIC were being denied by the persistent efforts made by the Hosei defence led by MORIOKA Riku, as the J2 side was completely shutout by the opponents, recording zero shots in the first half. In efforts to change the dynamics of the match, Verdy shifted their formation to 4-4-2 in the second half. Although the new system allowed the team to possess the ball for a longer stint, they still lacked opportunities that threatened the opposing goal, as their struggle continued throughout the match. 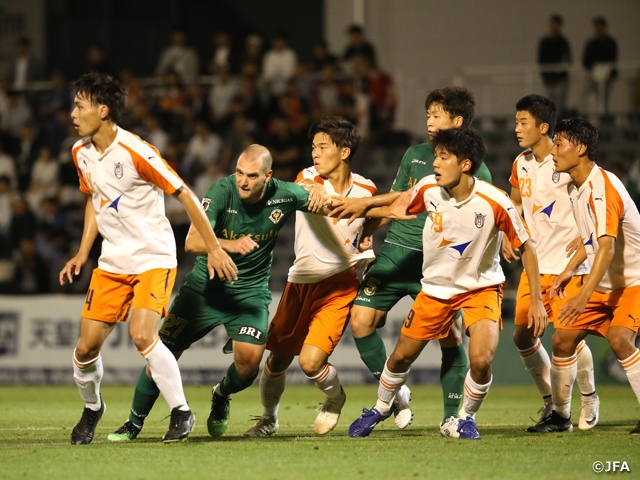 It was Hosei University who took the lead in this match. In the 57th minute, SEKIGUCHI Masahiro broke through the right flank and delivered an early cross, allowing Matsuzawa to score with a perfectly timed header that pierced the right corner of the goal. With their back against the wall, Tokyo Verdy applied more numbers upfront to equalise the match, but Hosei kept their composure to maintain their advantage. Hosei’s patience got paid-off in the 79th minute, when SATO Daiki broke away from the halfway line to penetrate the left side before sending a cross towards the centre. It was Hashimoto who made the run into the far side to double the lead for Hosei, giving the university side their ticket to the third round, where Gamba Osaka (J1) awaits. 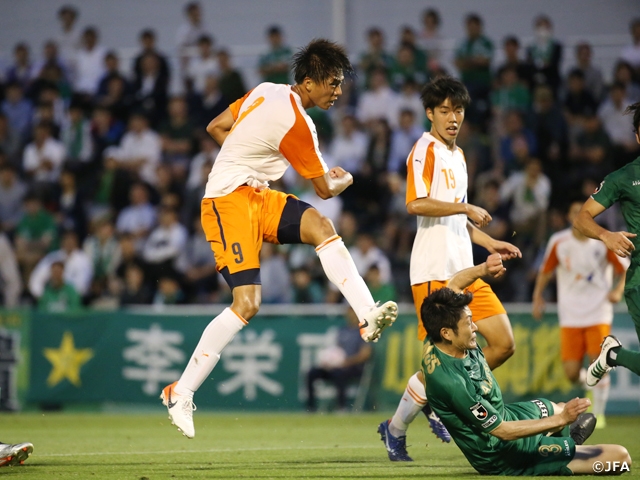 NAGAYAMA Kazuya, Coach (Hosei University)
Prior to this season, we have set our goal to win against a club in the J. Leagues, so entering today’s match, our intention was not to play a good match, but to win the match. We have conducted training matches against clubs in the J. Leagues and prepared ourselves thoroughly for this day, so I am glad that our efforts paid off. We were missing two of our key players to the Universiade tournament, but with UEDA Ayase in our squad, we tend to rush our plays to deliver the ball to him and with KONNO Kazuya, the team tends to rely on his individual efforts too much, so in a way, without the two players we showcased a better performance than usual. We have been preparing ourselves from spring for these situations where we are missing the two players, so we will continue to work hard and prepare ourselves to win the next match.

MATSUZAWA Akira (Hosei University)
When the ball was delivered to the side, I saw an open space in front of the goal, so I made a run towards the far post. The ball was delivered perfectly, and I was able to score just the way I envisioned. We were all-in for the one opportunity in this match. We wanted to play in behalf of the two players who are currently with the national team and make it into the third round. We also didn’t want people to think that we are worthless without the two, so we all kept our focus throughout the match. Just like we did for today’s match, we will prepare ourselves to showcase our best performance in our next match. I am striving to become a professional football player, so I will continue to work hard at the individual level to achieve my goal.

Gary John WHITE, Coach (Tokyo Verdy)
We started off the match very slowly and gave away the initiative to our opponents. With the opponents applying aggressive pressure from their frontline, our defence looked like we were playing five in the back and forced us to spend majority of the time in our own territory. We shifted our formation in the second half to change the dynamics of the game, but we ended up conceding two goals to our opponents. For the university team, this is their biggest match of the year. It is like the World Cup final to them and they showed a stronger will to win the match. Whether in Japan or in other countries, it is always difficult to face teams from lower categories in a cup match like this.

SHIBASAKI Takahiro (Tokyo Verdy)
We all knew that the first match of the tournament will be a difficult match, so we told each other to enter the match with the right intensity but ended up playing defence for the majority of the first half and failed to pick up our rhythm. We entered the second half with signs of improvements but couldn’t score the goal to pick up the momentum. Our opponent was the better team in this match. We were fully motivated to showcase our best performance, so it was not like we were caught off guards. As a team, we must review how we lost our ball possessions and the way we defended in this match to make the adjustments ahead of our next competition.

Fixtures and Results through the 3rd Round