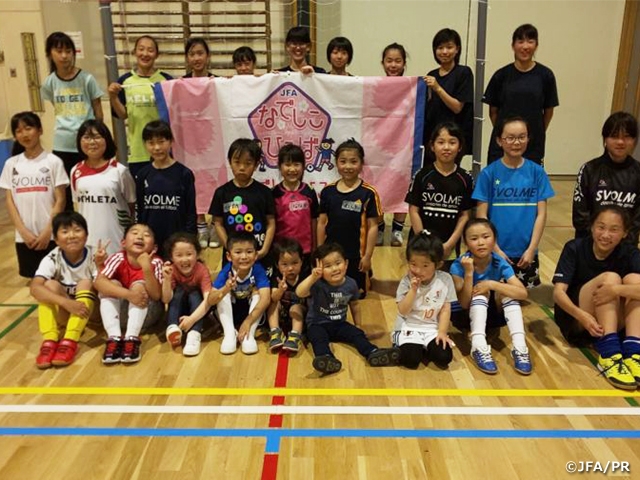 On Sunday 19 May, the JFA Nadeshiko Hiroba in Teine was held in Sapporo, Hokkaido. This was the ninth edition of this event since starting on August 2018.

The first part of the event was held between 6 p.m. and 7 p.m. where children ranging from toddlers to third graders joined. With both boys and girls taking part in the event, the youngest participant was just two years old. Every participating child ran around or toddled around to chase the ball, where the event was filled with joy and laughter.

The second part of the event was held between 7 p.m. and 9 p.m. where children over fourth grade participated. This part of the event was held only for girls, as the participants included girls who usually plays for a boys’ team, girls who are hesitant to join a boys’ team, and first timers who are interested in playing football, while some had returned after participating in the past events. 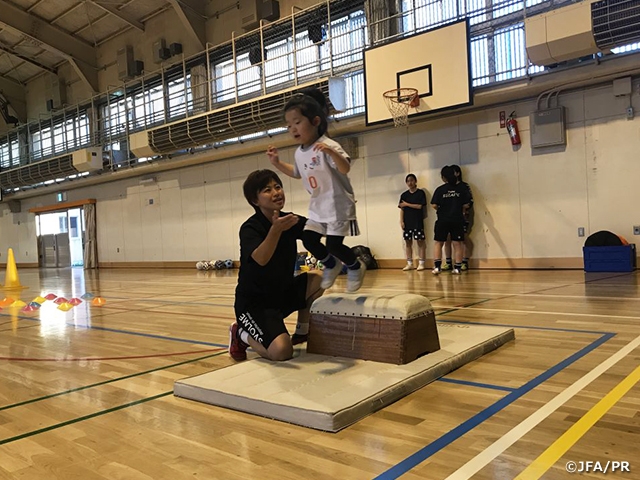 The Nadeshiko Hiroba in Teine is hosted by a girls’ football team, “Teine EGZAS FC,” and the event is led by their female coaches. Members of the team who are in junior high school also supports the event as “sister coaches,” as they come up with training menus and coach the kids at the event. During the first half of the event, these sister coaches gave out one-on-one coaching to the participants, while in the second half, they played a role to show examples and joined the games with the participating kids. By allowing these junior high school players the chance to coach younger kids, the team believes that it gives them the opportunity not only to grow as a player, but as a human being as well. The younger generations are spending less and less time outside, and seeing young kids running around and chasing the ball with a big smile gives the coaches great joy at these events.

The Nadeshiko Hiroba will continue to take place once a month in order to promote sporting activities at various locations around Japan.

ARIGA Shinichi, Director of Teine EGZAS FC
This is our second year since launching the team and we are not well-known in the area yet, so we started by promoting the Nadeshiko Hiroba through our team members’ family and friends. Now the word of mouth has spread our existence to various communities, and we are seeing many participants coming back to re-join our events. We have conducted a survey towards the participants’ parents for this Nadeshiko Hiroba and the results showed that there are demands for this event to take place on a continuous basis and also at different locations. We will continue to give our efforts to help promote the sport and revitalize the local community through the Nadeshiko Hiroba.

・I usually play for a boys’ team as the only girl on the team, so there is always a gap in our topics of conversation, and the boys are usually much stronger than me. At the Nadeshiko Hiroba, I get to talk with older girls and the atmosphere is very welcoming. This is a precious experience for me because I get to have so much fun.

・I get to touch the ball many times, so please continue to hold this event.

・The kids get to learn the fundamentals while playing fun games. It seems like they are all having fun, so I am very satisfied with this event.

・I wish this event was held at different locations too.

A place where little girls, young ladies, mothers, and grandmothers can all join to enjoy the sport of football. Each event is hosted by local organisations and facilities certified by the JFA.