U-23 Japan National Team to meet Ghana in MS＆AD CUP 2016 on Wednesday 11 May at Best amenity Stadium in Saga – details of tickets, broadcasting, and kick-off time 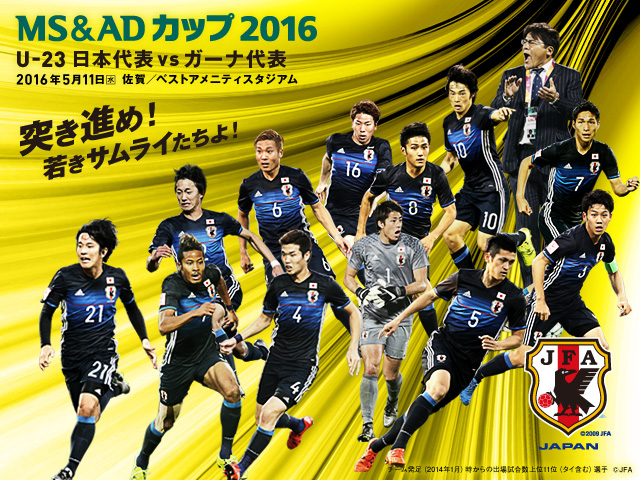 The U-23 Japan National Team will play against the Ghana National Team in the “MS&AD CUP 2016” on Wednesday 11 May at the Best amenity Stadium in Saga. Below can be found information about the kick-off time, a summary of tickets sales, and broadcasting details.

Details of ticket sales can be found here. (Japanese version only)

TEGURAMORI Makoto, Coach
It will be an important opportunity for us to know how well we can play with what we’ve been practicing and what we need to do from now. We must show all that we can do in the coming match. In terms of the technical aspects, we’d like to show our base and core, which we hope to develop into a Japanese playing style – ‘all for defence, all for attack’ and ‘efficient on the move’. As for the mental side, I’d like the players to feel the responsibility for achieving something magnificent. We hope we will get a lot of power from our supporters, who come to see us at the stadium.

HOME National Teams U-23 2016 MS&AD CUP 2016 NEWS U-23 Japan National Team to meet Ghana in MS＆AD CUP 2016 on Wednesday 11 May at Best amenity Stadium in Saga – details of tickets, broadcasting, and kick-off time