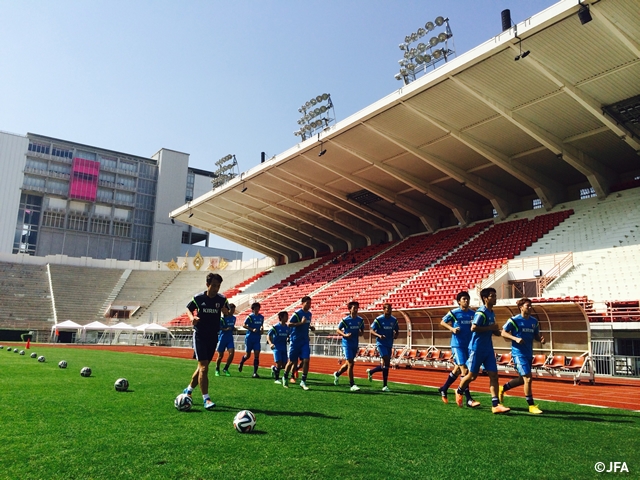 The U-21 Japan National Team had the third day of the Thailand and Bangladesh tour.
In their first morning session of the tour, the players completed a running programme and practiced passing and controlling the ball in pairs in order to acclimatise to the heat. The temperature was 29 degrees C and the humidity was 59%. They finished the morning session with ten sets of 15 second-interval running.
In the afternoon, they appeared at a press conference hosted by the Football Association of Thailand. Teguramori Makoto, the head coach, thanked the Football Association of Thailand for the invitation and, in front of the local media, expressed enthusiasm for the coming match. Worawi Makudi, the President of the Football Association of Thailand, was also there, which implied the coming match had high-visibility.
In the evening, the players held their second practice session. They had some physical training to ‘acclimatise to the heat’, passed balls around in groups of seven, and practiced their tactics. Although the players seemed a little tired from the 19-hour journey the day before and the two practice sessions in the heat, they seemed to be filled with a sense of satisfaction. 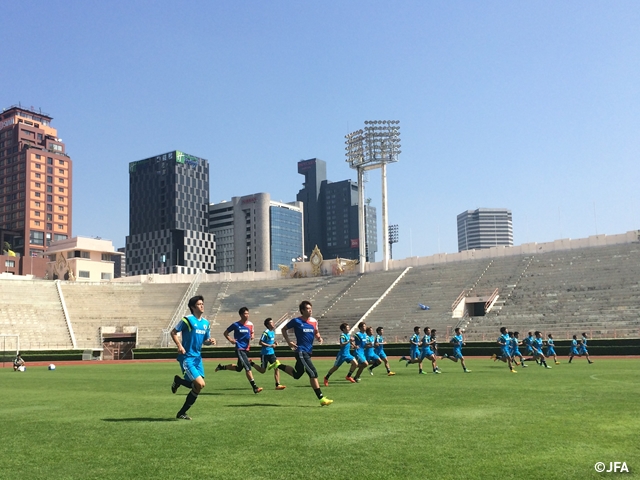 GK 1 NIEKAWA Ayumi (Jubilo Iwata)
I’d like to make the most of the experience in this South-east Asia tour. I hope I’ll find my own way to acclimatise to the heat during this tour, so that I can use that tips in the qualifying round. As we’ve come from the cold in Japan to the heat, I occasionally have some difficulty breathing in the practice session. I’d like to acclimatise properly by pushing myself more. I’d also like to cooperate with Kushibiki Masatoshi and Yoshimaru Kenshin in order to make the goalkeeping unit better. Also I’d like to appeal my advantages – the height and the coverage, and learn from their advantages to improve myself.

MF 3 ENDO Wataru（Shonan Bellmare）
During this tour, I’d like to focus on getting used to the heat in South-east Asia. I’ll make sure I sweat enough. I’d also like to learn the team’s tactics in the practice session and bring them into the coming two games. The delay of the flight yesterday was actually a very good experience. As it might happen again before the qualifying round, I think that was a positive thing to experience. On our first day, I think we all focused on acclimatising to the heat as a team, which is our theme of the tour. 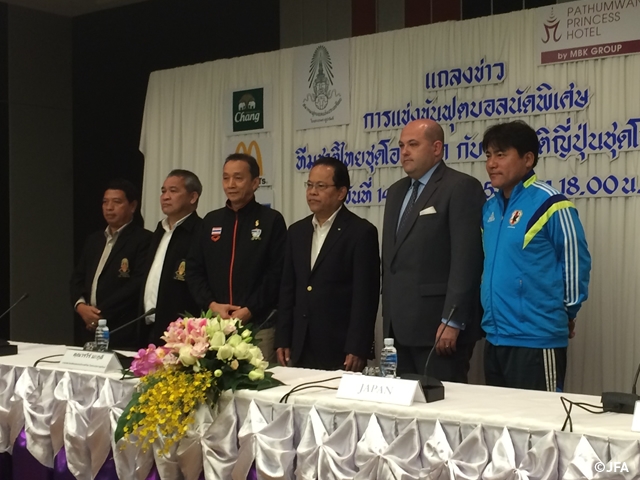