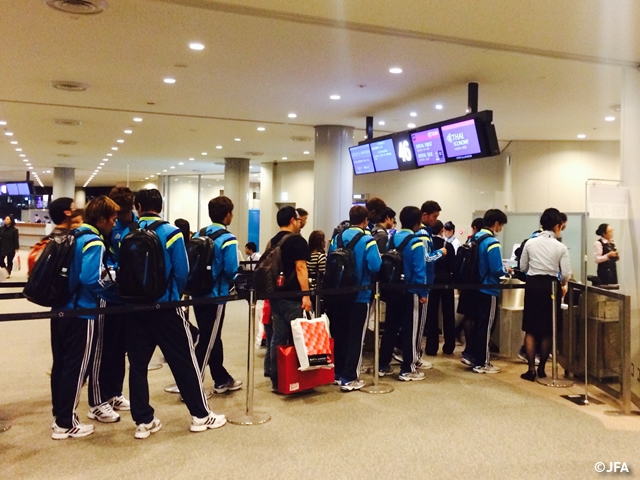 The U-21 Japan National Team started their tour of Thailand and Bangladesh. The players got together in the afternoon on 10 December and held a meeting. Teguramori, the head coach, shared with the players the ultimate aim of the team: ‘to win a medal at the Olympics’, and the goal of this tour, which is ‘to acclimatise to the environment’.

On 11 December, although the players were supposed to fly to Bangkok from Haneda Airport in the morning, there were some mechanical problems. They had to move to Narita Airport and flew to Bangkok in the early evening. They arrived at 23:30 local time, which was approximately eight hours later than scheduled. They had to cancel their practice session at the stadium. On 12 December, they will have their first practice session of this tour. They expect to have a productive time there, bearing the next two years time in mind. 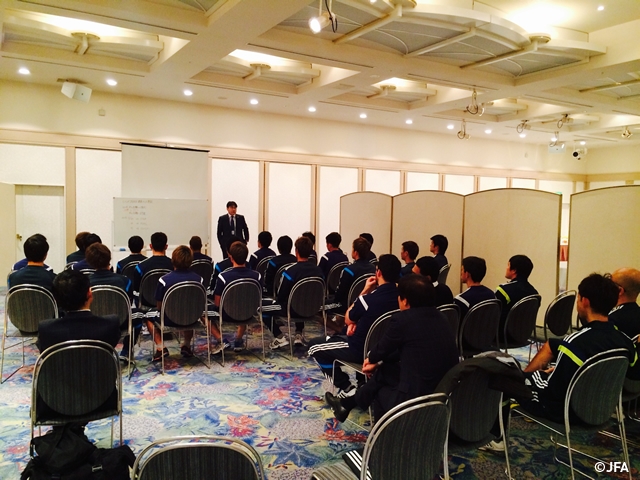 TEGURAMORI Makoto, Head Coach
We will start preparations for our goal - ‘change Japan’s football by winning a medal at the Olympics.’ We must get through the qualifying round in order to achieve our ambition. This tour is important for us to acclimatise to the heat, as we’ll have our qualifying round in the same area. The players, who are already good in this environment, can improve themselves even more, and those, who are not good, can use this opportunity to become better. It’s hard to give a 100% performance in the heat. I’d like the players to think how to control the game or individual plays in this environment. I hope they will do their best in this tour with pride and responsibility as the national team.

NAKAJIMA Shoya (FC Tokyo)
As this tour is essential for the qualifying round of the 2016 AFC U-23 Championship in March, I’d like to do my best everyday in order to improve in the limited time. Especially now we’re in South-east Asia, in which the qualifying round will be held, I’d like to focus on acclimatising to the environment as well. It’s the first time I have visited Thailand. We might play against Thailand in the 2016 AFC U-23 Championship. So I will also learn about a potential future opponent.

IWANAMI Takuya, VISSEL KOBE
Our opponents in the qualifying round of the 2016 AFC U-23 Championship have been fixed. So we’d like to focus on them. I know this tour is very important, as we don’t have much time before the qualifying round. We came here to experience the matches in the heat, just like the coming qualifying round, and I’d like to bear that in mind to build a positive image. I look forward to our first match, as the opponent Thailand is a strong team. I found personal advantages and issues to be fixed from the Asian Games in September. During this tour I’d like to strengthen my advantages even more and improve on my weaknesses in order to be on the pitch of the qualifying round. We finished as quarter finalist before, but I’d like to build up positive momentum for us by winning two consecutive matches. 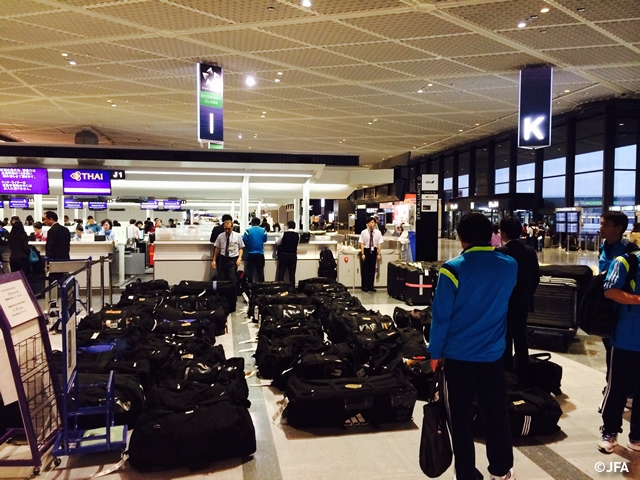