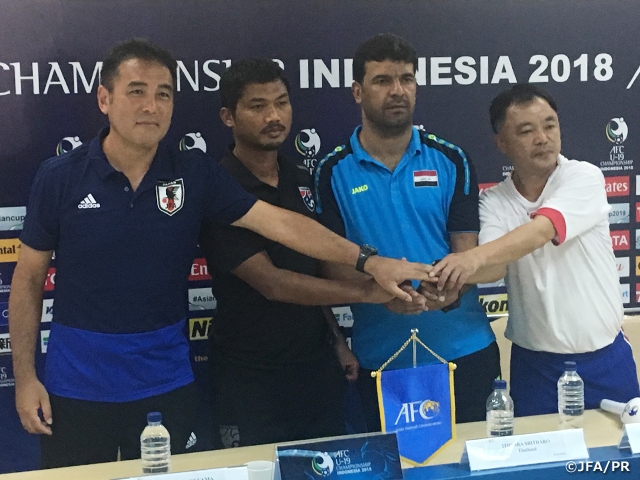 On Thursday 18 October, the AFC U-19 Championship Indonesia 2018 opened its action, where teams will be fighting for their spot into the FIFA U-20 World Cup Poland 2019. Japan, who is placed in Group B, will face Korea DPR on Friday 19 October.

One day ahead of their matches, coaches from Group B, including Japan appeared in a press-conference at the match venue, Pakansari Stadium. Alongside the coaches of Iraq, Thailand, and Korea DPR, Coach KAGEYAMA Masanaga stated, “All three matches at the group stage will be tough. We will be focused ahead of each match and fight to win three points at all matches, so that we can earn a spot into next year’s U-20 World Cup.”

The team checked out the pitch condition of Pakansari Stadium ahead of their evening training and headed back to their training field at Cibinong Stadium. Ahead of their session, Coach Kageyama spoke to his players and concluded his speech by shouting “Let’s win!” The first 30 minutes of the session was opened to the media, while the remaining portion of the session was conducted behind closed doors, as the team tuned up for their match against Korea DPR.

Japan’s first group stage match against Korea DPR will kick off at 19:00 (21:00 Japan time) on Friday 19 October, as their battle to become Asian champions will start from this match. 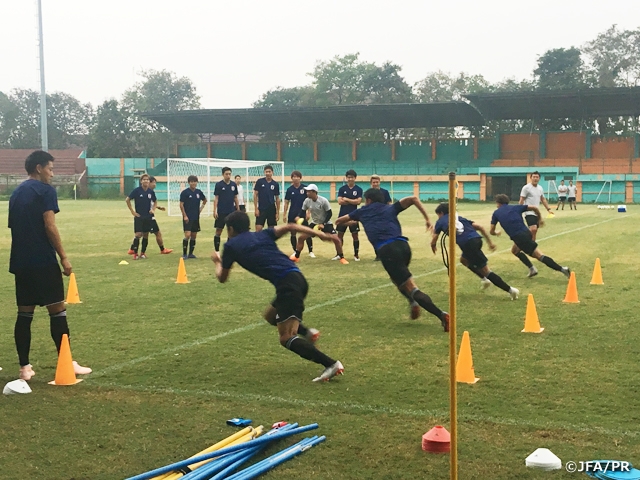 KAGEYAMA Masanaga, Coach (U-19 Japan National Team)
The players have been expressing their anticipation ahead of this match, on and off the pitch. The team has conducted a mini-camp in Japan and now we are in Malaysia to prepare ourselves for this tournament. And the players are in great form ahead of our first match. Ideally, we would like to condition ourselves with the entire tournament schedule in consideration, but we cannot afford to take any risks facing the teams in our group. We have prepared ourselves to solidify our chances to win the first match. Compared to the matches against Thailand and Iraq, where we can observe how they play in this tournament, the first match will present us with a very difficult challenge. We will just have to focus on our performance ahead of tomorrow’s match. In a sense, we just have to wait until the game starts to see how our opponents play. Thus, we must be able to make the adjustments early in the match. My players are full of energy and my job is to allow them to play with no hesitation.

MF #6 SAITO Mitsuki (Shonan Bellmare)
We have managed to conduct a good preparation and the team’s atmosphere is great. More than anything, we must focus on what we can do in this match, rather than worry about our opponents. The teams in Asia will fight with great intensity to win the ball, so we must match their intensity while playing with patience. Every match will present us with great challenge, but at the same time it will give us an opportunity to improve both as an individual and as a team. We will do our best to win the title and earn our spot into next year’s World Cup.

FW #9 KUBO Takefusa (Yokohama F・Marinos)
I don’t have much experience facing Korea DPR, but I have the impression that they are very aggressive in fifty-fifty situations. It is important that we don’t back down against their strong point in tomorrow’s match. I think it’s ideal to face tougher opponents early in the group stage to put ourselves in an optimal position, so we will do our best to win out of this group stage. I have experienced the AFC Championship at the U-16 level, where we faced many adversities, but I have always stayed optimistic to fight through, so I will try to lead the team in that aspect. It will be great if both our U-16 and the U-19 team can win the title in Asia, but we don’t want to get too far ahead of ourselves and just focus on the match ahead of us tomorrow. We will enter the match as one team and win the match so that we can get to a good start.

FW #11 TAGAWA Kyosuke (Sagan Tosu)
As the match is approaching us, I am feeling the excitement as well as the responsibility. With the experience playing in the U-20 World Cup last year, I feel like I must lead the team, as I am focused to do whatever I can to help the team win. Even if we can’t perform the way intended in our match tomorrow, we must keep on fighting. Rather than taking a certain tactical approach, I have the impression that the teams in Asia plays the game with great fighting spirit. I hope to score goals in behalf of all the players who couldn’t make it to this tournament and fight as a team to earn our ticket into next year’s World Cup. 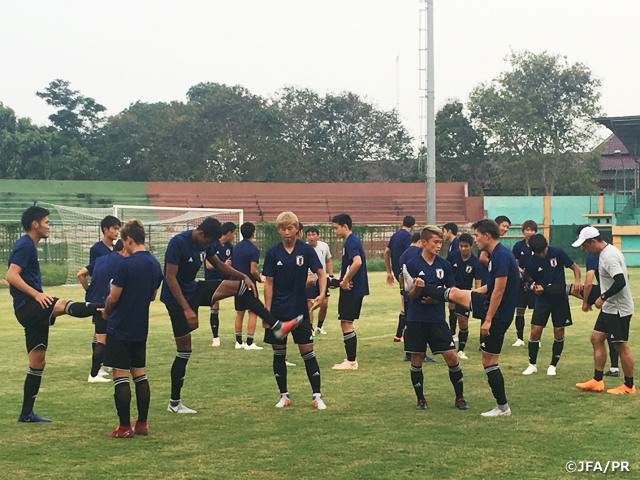