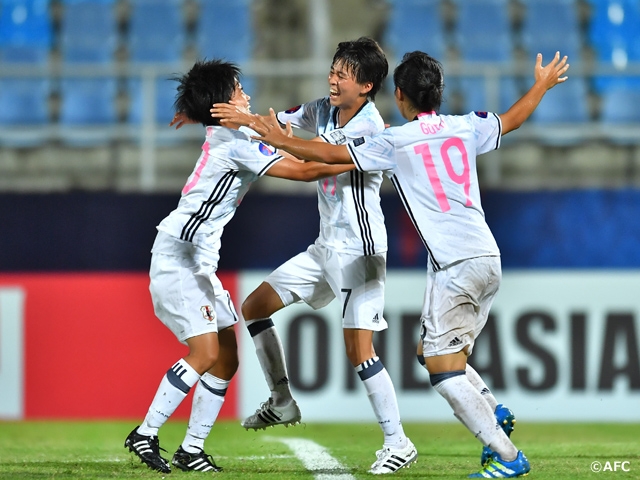 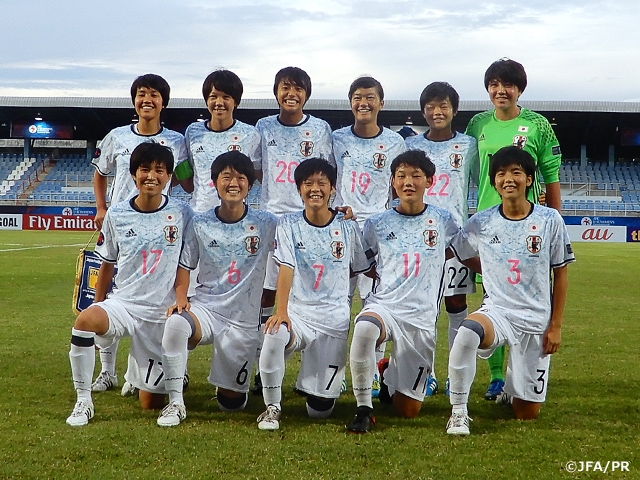 The final group-stage match of the AFC U-16 Women’s Championship Thailand 2017 in Group B saw the encounter between the two playoff-qualified teams, U-16 Japan and U-16 Korea DPR, on Sunday 17 September. The key match-up that would decide who would top the group to face second-placed team of Group A in the semi-finals kicked off at 19:00.

It was a tentative start to the match as both side were waiting to see the game plan of their opponents. However, it was Korea DPR who took the early initiative of the game and created few scoring chances. Thanks to the great saves from Japanese goalkeeper OHBA Shu, the North Korean squad was kept scoreless in the first quarter of the match, but in the 18th minute, they capitalised on a chance from the right flank and fired home a cross ball into the Japanese net to take a 1-0 lead.

In attempt to level the match, Japan fashioned a chance from the left side on 26 minutes. ITO Sara’s cut back was met by KINOSHITA Momoka in the centre, but her shot blazed over the crossbar. Menacing attacks from the Japanese squad continued for the remainder of the first half, and Ito surged up the left side and struck from range in added time , but the opposing goalkeeper comfortable secured the shot that went straight to her hands. Korea DPR took a one-goal advantage at halftime.

Trailing by a single goal, Japan continued to search for an equaliser in the second half and orchestrated a scoring chance in the 68th minute, when TANAKA Tomoko, who was brought on for YAMAMOTO Yuzuki, chested down a right cross to attempt a shot at goal, but failed to find the back of the net.

Japan finally levelled the match from a corner in the 76th minute. After a goalmouth scramble, Kinoshita slotted in a loose ball to tie the game. Japanese women continued to attack as they now looked for a go-ahead goal. Then, after 86 minutes, Yamamoto tapped in a deflection in front of a goal to put her side ahead. In the remainder of the match, both sides failed to find the target and Japan edged DPR Korea 2-1 in the last match of the group stage.

With this result, Japan clinched the top spot of Group B and will face the second-placed team of Group A, U-16 Korea, in the semi-finals on Wednesday 20 September at 21:30 (Japan Time). 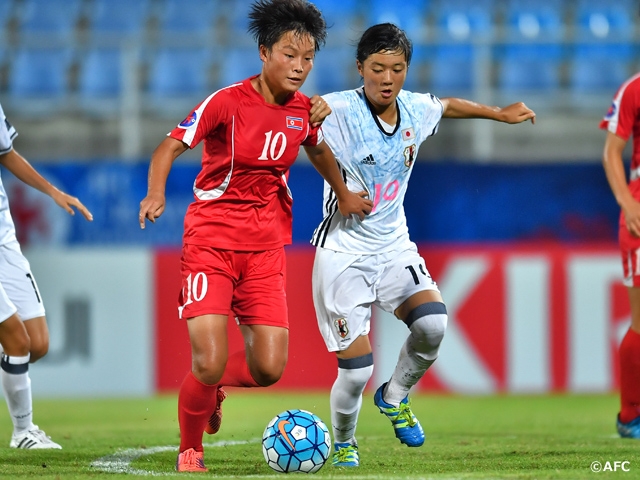 GK #18 OHBA Shu (JFA Academy Fukushima)
It was toughest match in the group stage. The former U-16 Japanese squad had previously lost against Korea DPR and, thus, every one of us entered the match with a strong determination that we would avenge that loss. However, our opponents created many threatening chance right from the beginning of the match, and it was difficult to play at our own pace. Despite conceding an opening goal, we fought back with persistence and never gave up until the end of the match. I believe this was the reason why we could grab a comeback win.

We are still in the midst of the qualifiers and haven’t booked a place in the U-17 World Cup. It is far from being over and we will be looking to win the remaining two matches and clinch the title of the AFC Championship, and hope that it will give us the confidence to strive for even higher in the subsequent competitions as well.

DF #19 GOTO Wakaba (Nippon TV Menina)
Today we had the final group-stage match that would decide who would top Group B. We could hear their voices and knew they were ‘pumped up’, and if we could not meet their energy level and get into the game, then they would take control of the match. There were few areas that we were surprised such as their physical strength, the distance that they could kick their long balls and their tenacity and strength on the ball. However, we were focused on our side of the game and did well in connecting passes and breaking through the defence. I believe this is the area that we can build on for the next match as well. Winners of the semi-finals will book a place in the U-17 World Cup. We might get a little nervous, but we shall not forget about our good performance today and go all out for the next game.

MF #6 ITO Sara (Nippon TV Menina)
We faced Korea DPR today. In the first half, we were overwhelmed by the opponents' intensity and could not move the ball well. We conceded an early goal and it was crucial that we did not allow them to score further. In the second half, we had better possession of the ball, and took the ball to the front of their goal more than we did in the first half. I don't recall having many decisive chances, but we still did well to capitalise on few of them to win the match. We haven’t qualified for the World Cup yet. We need to make the best possible preparations and grab a ticket to the World Cup by winning the next match against Korea.