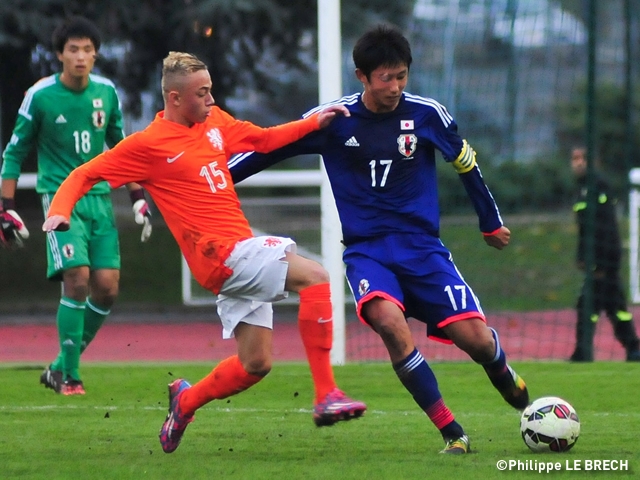 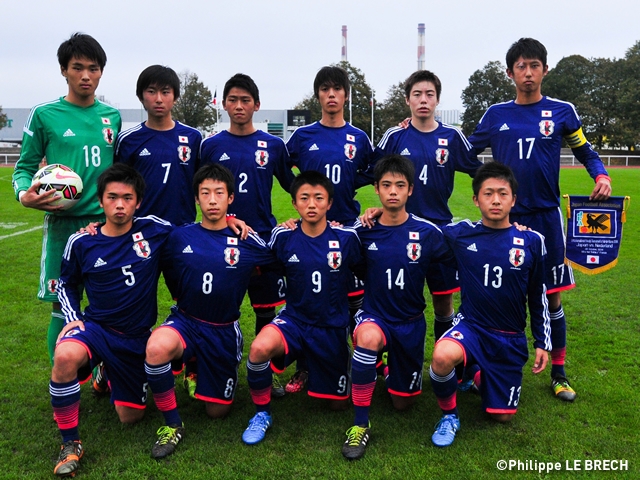 Japan’s opening match of the Val-de-Marne U-16 International Friendly Tournament turned out to be an aggressive contest that both teams attacked and defended back and forth from the very beginning. The side that grabbed the early initiative were the Netherlands U-15. They did not allow Japan to get unmarked with dynamic attacking and intense pressing. Japan U-15 spent tough time struggling to connect cleared balls. In the 39th minute, however, Sugiura brilliantly controlled defender Ito’s long ball and started an attack on the left flank. Sugiura moved around the ball with short passes through Miyajima and Fujimoto and sent a through ball to Sennami, who rushed up 60 meters on the right. Sennami composedly beat the goalkeeper to convert a golden one-on-one opportunity, and the first half ended with 1-0.

Just 50 seconds after the start of the second half, Japan conceded a goal when Netherland put intense pressure on Japan and got a cleared ball. Netherland continued to give Japan tough spell when they sent a stunner into the net at the centre from a cross ball to turn around the score. Japan’s ultimate chance came in the 75th minute. Left-back Sato Sota smashed an incisive right-footed shot after crisp passing exchanges, but it was denied by the goalkeeper’s fantastic save and Japan missed the equalising opportunity. In the 80th minute, conversely Japan allowed the opposition to break through the right flank and to tap a cross ball into the net again for the third goal. Japan National U-15 Team ended their opening match with a 1-3 loss.

YOSHITAKE Hirofumi, Head Coach
The Netherlands started with compact defence and placed players wide up front to break through with fast individual dribbling, and connect cross balls to shots. Against such a style, Japan tried to keep moderate distance between players and possess the ball, but we couldn’t play as we wanted to as yielding to opposing high pressure. Meanwhile, we took advantage of side attacking, which is our strength, to score in the end of the first half and kept our hope for the second half.

But we couldn’t hold up and failed to manage the game in the situation when we were winning 1-0, which is one of our weaknesses. Then, just after the break, we allowed the opposition to erase the gap to 1-1 after our passive performance. I can give some players credit for their great performance because some played for the first time at a new position and others aggressively played in some stretches. We will work out to improve our productive passing to keep our formation compact as well as to position deeply and widely. The tournament takes place in a small town, but a lot of people came to watch the game. I felt this country is a place where the football culture takes root. I want my players to appreciate that we can play international friendly in such a good environment.

ITO Hiroki (Jubilo Iwata U-15)
I was looking forward to seeing how I can play the game against one of the world’s top countries. I was assigned for the game captain, so I was excited to put the team together by speaking out aloud to my teammates. We had some pinches in the first half, but it’s good we all could defend thoroughly by throwing our bodies around. Because we lost a goal in the very beginning of the second half, the opponents grabbed the momentum. I should have communicated with my teammates aloud to get back in shape. We will work on the issues that came up today in tomorrow’s training to capitalise on them for the next game.

WAKAHARA Tomoya (Kyoto Sanga F.C. U-15)
Just being myself, I tried to be composed when getting into the game. The first half was not satisfactory because of my poor positioning and bad prediction against balls coming behind our defensive line. In the second half, I got refreshed and played higher on the pitch so that I could play more aggressively. But our momentum went away with the lost goal just after the break. It’s good that we all could work hard to defend, but I’m disappointed we eventually conceded three goals. We will review and focus on the starting position of each player and how we are supposed to receive the ball when building up.