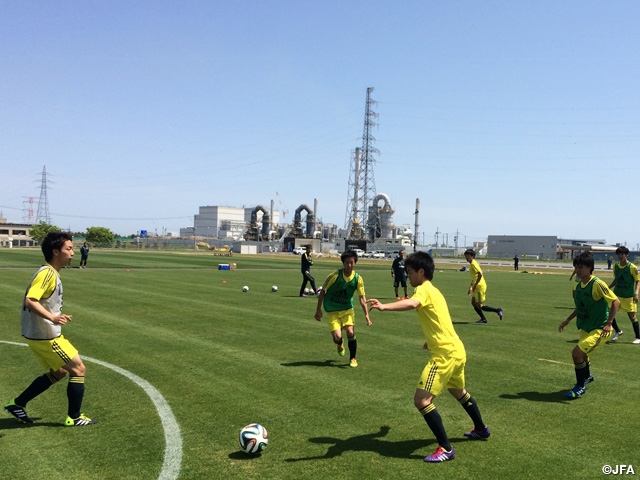 The Japan Under-19 provisional squad held a pair of training sessions in the morning and afternoon of the 19th May.
In the morning session, those who played official games or training matches at their respective clubs on the previous day worked on their conditioning, mainly running. Other members confirmed about how to received the ball and the distances of their support for their teammates by playing pass games of 3 on twos, four on 2, 5 on 5s plus a freeman and 6 on 6s.
Meanwhile, following the morning session, Kaneko held a penalty shootout with some children who were there to observe the practice. Kaneko stood at the goal mouth and took shots by the children. 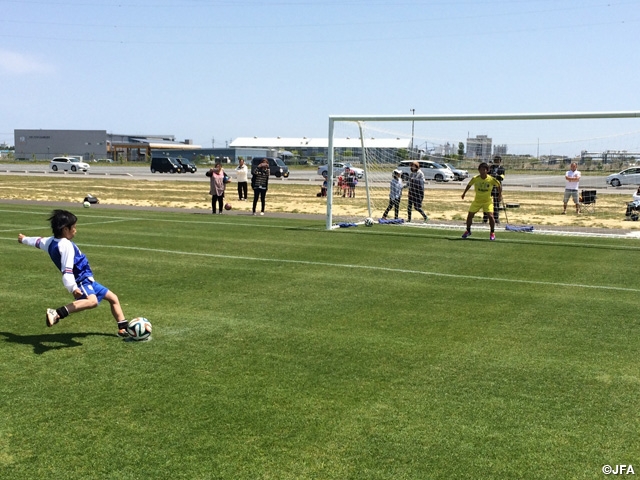 On their way back from the Soma Koyo football field to their hotel on a bus, they took a route to pass by the coastal area of Soma, which took the biggest damage for the Great East Japan Earthquakes, and the bus driver explained them what it was like when the disaster took place and the current situations there. The team staff and players realised that there were still a long way to go for the recovery of the area, such as the restorations of the trains and roads.

For the afternoon practice session, the players who played in J2 games on the previous day joined the team and all the members have assembled. After warm-ups, they practices their shooting from combinations plays using the entire pitch. Since some of the players were making the national team for the first time, there were some occasions that they struggled moving the ball as they wanted to, but as they kept doing it, they eventually got to be able to play with better judgements, and make shots in better ways sharing the judgements between the players. After that, they deepened their combinations by playing 9 on 9s and then wrapped it up with shot training.
After the afternoon session, the players took time to spend some time with the local children who were observing their practice, kicking the ball on the pitch. 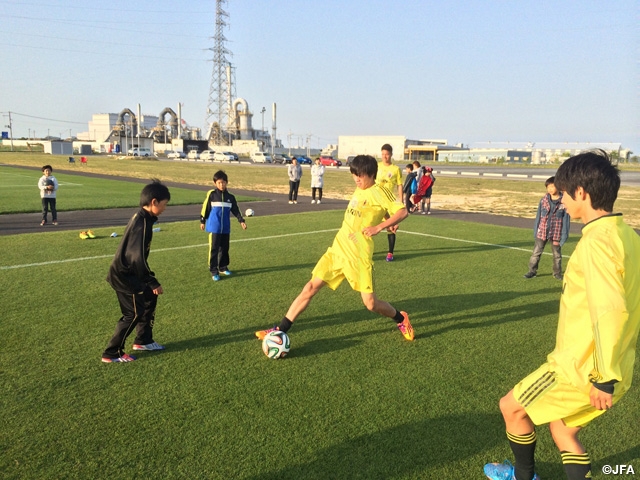 Following the night meal, a coaches seminar was held by head coach Suzuki for the local football coaches. There were many of them who coach elementary school students in it, and Suzuki talked to them for about an hour about the necessary elements for the coaches of the developmental generations, introducing some of Suzuki's own experiences.

The team will play a training match against Fukushima United F.C. on the 20th. 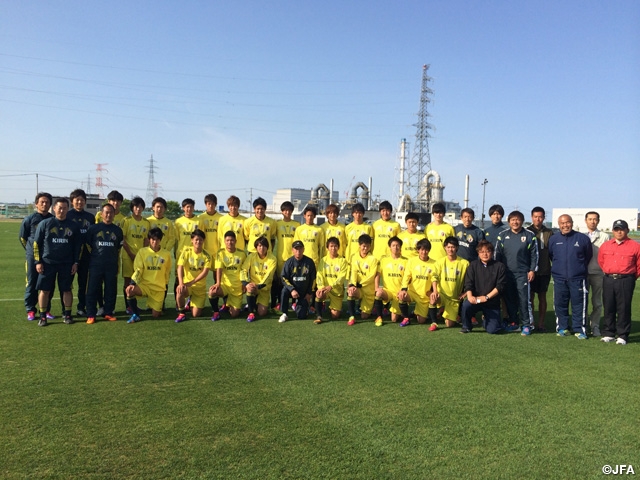 OKUGAWA Masaya（Kyoto Sanga F.C. U-18）
We genuinely got to work on our training from today. Compared with the play of those who are one generation above us and my play, I felt that they are better by one level or two. In the upcoming training and training matches, I hope I will be able to reach their levels as much as possible.

NAKAMURA Kosuke（Kashiwa Reysol）
I am pleased that I have been called up for the training camp for the provisional national team this time. Personally, this is my first time to be participating in a national team of this category, so I'm really looking forward to it. Although it will be a short period, I would like to put up as much as I can and contribute to the team. And I am going to do my best to help the team have a positive outcome in the AFC Under-19 Championships come in the autumn.

OMOTEHARA Genta（Ehime FC）
I feel very pleased to have been called up for the training camp this time. I want to showcase myself, putting up the best I can, while understanding the tactics of the team well enough. In today's training match, I thought that I had to take communication much more. Since we only have a short time and we have a training match tomorrow, I want to talk with my teammates a lot more and understand the tactics, so I will be able to contribute to this team as quickly as possible.