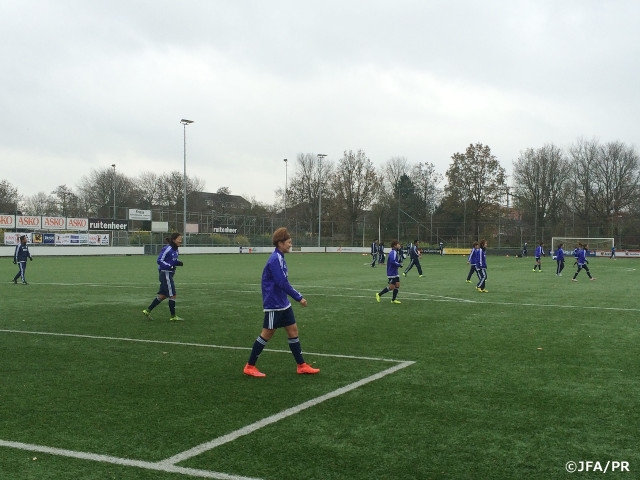 On the day of their arrival, the players did some stretches and went for a walk to refresh their bodies. They enjoyed reuniting with three players, who are based overseas, UTSUGI, OGIMI, and KUMAGAI. The players held two practice sessions the following day, 24 November.

After they checked their physical condition with the yo-yo test and some light practice, such as passing, in the morning, they moved onto 10-on-10 and 11-on-11 mini games in the afternoon to finish the one-hour-and-a-half training session.

The coach SASAKI thinks of this Dutch tour as a "fusion of core players and newcomers". As the Olympic qualifiers are coming soon, this international friendly against the Netherlands Women's National Team on 29 November will be an essential match.

SASAKI Norio, Coach
With limited time before the Asian final qualifying round in Osaka for the Rio de Janeiro Olympics, we need to bring and show improvement there. The core players and newcomers must play harmoniously to raise the level of the team, while each player shows her strong spirit for the Olympic qualifiers. The staff will fully support the players.

DF #14  SAKAI Yuki (Vegalta Sendai Ladies)
It’s colder here in the Netherlands than in Sendai. I joined the team for the first time after a while, and I could see the improvement in the level of the team. I learned a lot on the first day. As there will be more practice sessions, I’ll learn more to improve myself.

GK #18  YAMASHITA Ayaka (Nippon TV Beleza)
Personally, I found it difficult to get acclimatised to the time difference, the artificial turf on which the ball reacts differently, and the environment. Having said that, I’ll practice hard with the team for the coming week to raise our level.