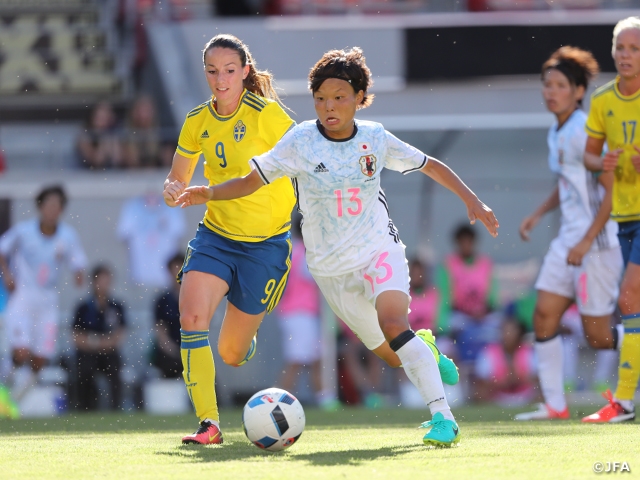 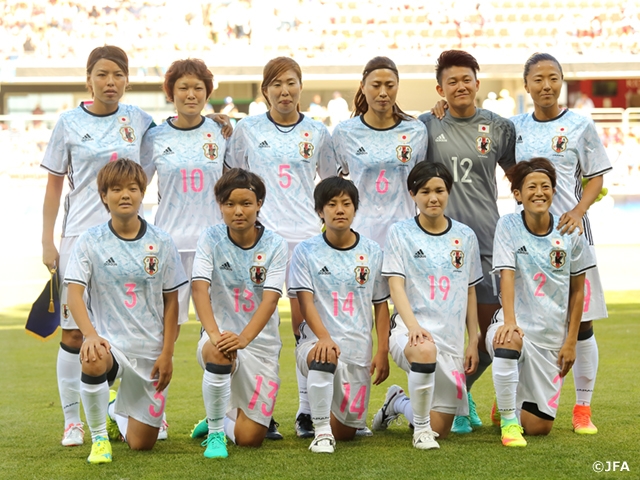 Nadeshiko Japan used a 4-1-4-1 formation – YAMASHITA Ayaka as a goalkeeper, UTSUGI Rumi, KAWAMURA Yuri, MURAMATSU Tomoko, and ARIYOSHI Saori in defence, KUMAGAI Saki as a defensive midfielder in the centre, SAKAGUCHI Mizuho and NAKASATO Yu as central midfielders, with NAGASATO Yuki and SASAKI Mayu as the left and right midfielders respectively, and MASUYA Rika as the sole forward. The stadium was filled with a 5073-strong crowd.

Although Nadeshiko Japan struggled to find momentum at the beginning of the game, the forward MASUYA Rika reacted to a pass from the defender ARIYOSHI Saori on the right to fire a shot in the 12th minute, only for it to go wide right. In the 14th minute, the goalkeeper YAMASHITA Ayaka saved a Swedish shot. Sweden continued their attack, but Japan waited patiently for an opportunity to initiate an attack. In the 32nd minute, Japan earned a corner kick. NAKASATO Yu, who received a grounded ball from NAGASATO Yuki, sent the ball to Masuya. Although Masuya took a shot, it went wide and the match went into the second half goal-less.

In the second half, ARIMACHI Saori replaced Nagasato in the 55th minute, and YOKOYAMA Kumi substituted Utsugi in the 69th minute. Japan were eager to break away from the Swedish pressure. However, in the 76th minute, the opponents passed the ball successfully from the left to the centre and their forward received it to score an opener. The midfielder CHIBA Sonoko came onto the pitch in the 80th minute, replacing Masuya, in order for Japan to initiate more attacks and level the game. Despite the change, just six minutes later, Japan conceded a goal from Swedish counter-attack, allowing the opponent build a two-goal lead. Although Japan never gave up attacking, including a shot by Yokoyama, the opponents added another goal by getting through behind the Japanese defenders after three minutes of injury time. 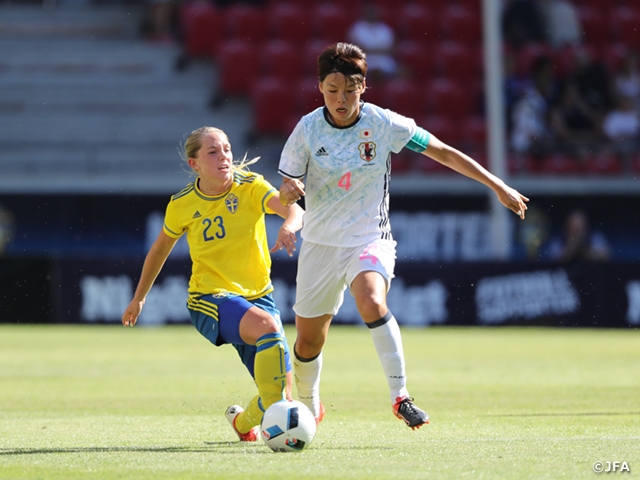 Nadeshiko Japan lost the game 3-0 to the Sweden Women's National Team, who will participate in the coming Rio de Janeiro Olympics under the coach Pia Sundhage, the former coach of the USA, the London Olympic champions.

The team will move from Kalmar to Kristianstad Sunday 24 July and will play a game against Kristianstads DFF in the Sweden Women’s League Division 1.

TAKAKURA Asako, Coach
We tried different things, but not everything worked out. In terms of attack, we couldn’t find the entry point to move the ball forward. We should have initiated our attack first and moved the ball better. We learned clearly what we could and could not do in the match. I feel really frustrated. I believe that it’s vital for us not to feel demoralised but to keep challenging.

DF #2  ARIYOSHI Saori (NIPPON TV BELEZA)
Our weakness in defence led us to concede three goals. I think we passed the ball around better in the first half. We did not have many scoring opportunities. We needed to play more calmly to get through in front of goal, increasing our chances at winning. In terms of defence, our task for the defenders is to take positions with less risk, when passing the ball. We’d need to fix that in order for us to improve our game.

DF #3  MURAMATSU Tomoko (NIPPON TV BELEZA)
The reason we conceded three goals is that we couldn’t manage risks in the back line and defend competently inside the box. Playing against the United States, we’ve learned how international players could attack in the game. So, I feel frustrated about our loss against Sweden. There was no sign of improvement in today’s match. I must show that I’m constantly improving to keep being selected for the national team. I’d like to raise the level of my game in every aspect―judging as quickly as possible to know the risks in front of goal, positioning correctly, and staying stronger near the ball.

FW #9  NAGASATO Yuki (1. FFC Frankfurt/Germany)
We have been improving on communication and passing the ball between the newly-added and the experienced players in our team. Through playing games, we were able to recognise each other’s strengths better. Also I’d like to point out we tried new things more than we did in the match against the United States. Kumagai played in a different position this time, which will surely benefit us in the future. Despite our defeat, we learned a lot of things.