In efforts to support the development of football in Asia, Japan Football Association (JFA) has been dispatching instructors to many regions of Asia. Most recently, Ms. OGURA Sakiko was dispatched to Guam to serve as Head Coach of the Guam Women’s National Team and Head of Women's Programme at Guam Football Association.

"On behalf of Guam Football Association, I would like to recognize Japan Football Association and JFA President Kohzo Tashima for their continued commitment to elevating the level of football in Asia and globally by providing assistance to numerous national football associations, including ours in Guam over the years. I also would personally thank them for their heartfelt cooperation in securing a top-level coach for the Guam Women's National Team and Guam's overall women's football program. Japan has a very strong women’s football program and we are fortunate to have Ms. Sakiko Ogura, one of Japan’s top coaches, now in Guam. This new appointment, which took many months to formally finalize, will greatly benefit our players, coaches, administrators, and volunteers in continuing to grow the women’s game here in Guam. I look forward to seeing the progress made in the upcoming years, as well as increased competitiveness by our girls and women’s national teams in international football."

"We greatly appreciate the collaborative efforts of Japan Football Association and JFA President Kohzo Tashima with Guam Football Association to help raise the level of the women's game in Guam. I would like to warmly welcome Coach Sakiko Ogura to the GFA family and pledge GFA's support to her and her women's football initiatives to benefit our athletes, coaches, administrators, and volunteers."

I am pleased to announce that I have been appointed Head Coach of the Guam Women’s National Team. I am very grateful for this opportunity, and I would like to express my gratitude to everyone who supported me along the way. Guam is the same size as Awaji Island in Hyogo Prefecture, Japan. As a native of Hyogo, I feel a special connection to the island of Guam, and I hope that I will be able to help amplify the message that Guam is as beautiful an island as Awaji. I am determined to make the most of each and every day I spend in Guam, and I hope to help further expand the potential of women’s football in Guam. 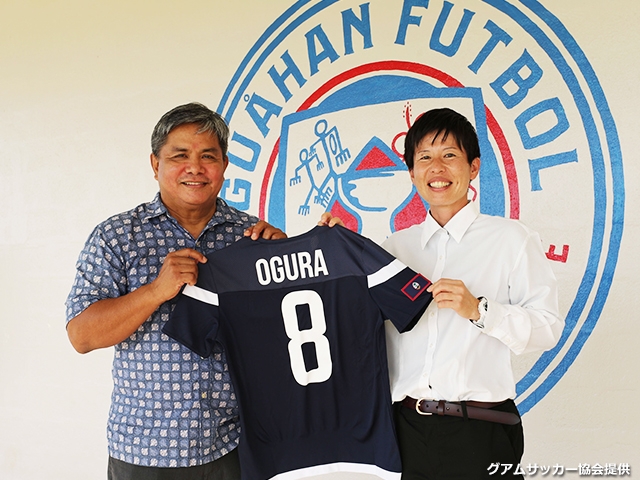