SAMURAI BLUE score for first time against Brazil in 11 years, but fall 3-1 to Canarinhos 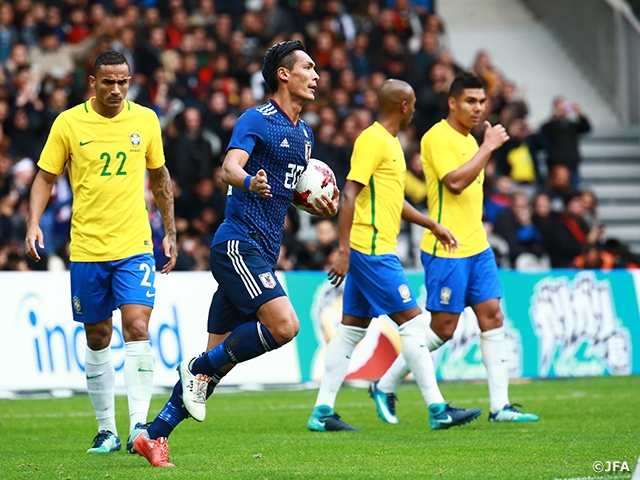 On Friday 10 November, SAMURAI BLUE (Japan National Team) took on Brazil National Team in an international friendly match held in Lille in northern France. Despite defender MAKINO Tomoaki’s (Urawa Red Diamonds) second-half goal which was the first goal for Japan against Brazil in 11 years, the team lost 3-1 to the South American powerhouse.

The majority of the Japanese players regarded this match as a yardstick of their current status and commented that they would put everything into the game. Despite their strong determination towards the important match, the national squad stumbled early in the game.

In the 8th minute, the intensity with which Japan had started the match dropped by a crucial decision made by the VAR (Video Assistant Referee), which is still in the experimental stage of implementation. FIFA’s new officiating system judged the defensive play from a corner by defender YOSHIDA Maya (Southampton FC) on midfielder FERNANDINHO as a foul and awarded a penalty kick to the South American side. NEYMAR, then, outsmarted the Japanese goalkeeper and scored an opener less than 10 minutes into the game.

Vahid HALILHODZIC later commented that the penalty kick ‘slightly took away the balance of the team’. Thereafter, Japan faced long stretches where they were forced to defend against the threatening attacks from Brazil.

In the 13th minute, Brazil created a chance after a exchange of passes between Neymar and GIULIANO, and CASEMIRO fired a long-distance shot, but did not find the target Two minutes later, off Japan’s corner kick, Brazil went on to hit on a quick counter. In a matter of seconds, they reached Japan’s penalty box, where midfielder YAMAGUCHI Hotaru (Cerezo Osaka) illegally took down forward JESUS, who were attempting to control the pass, and has given another penalty to the Brazilian side.

Although goalkeeper KAWASHIMA Eiji (Football Club de Metz) denied the second spot kick by Neymar, defender MARCELO’s right-footed strike off a cleared ball from a corner few minutes later found the back of the Japanese net to give Brazil a two-goal lead after 17 minutes of play.

Brazil’s effective transitions and high-speed counter-attacks had put Japan under strong pressure, but in the 29th minute, Yamaguchi sent a vertical pass and forward HARAGUCHI Genki (Hertha BSC Berlin) was fouled near the penalty area. Yoshida directly fired a free-kick, but his effort hit the top left corner of the woodwork.

Looking for ways to narrow the goal difference, Japan’s forward KUBO Yuya (KAA Gent), in the 36th minute, cut inside from the right and attempted to create a scoring chance. However, Brazil stole the ball and hit the Japanese side with another counter-attack. After an exchange of pass between Casemiro and WILLIAN, DANILO collect the ball and sent in a quick low cross into the space behind the Japanese defenders. Jesus ran towards the far post and tapped in the third for Canarinhos.

From the beginning of the second half, Japan brought on forward ASANO Takuma (VfB Stuttgart) for Kubo and found their attacking rhythm on the right flank, where Asano attempted a shot from an acute angle in the 48th minute. 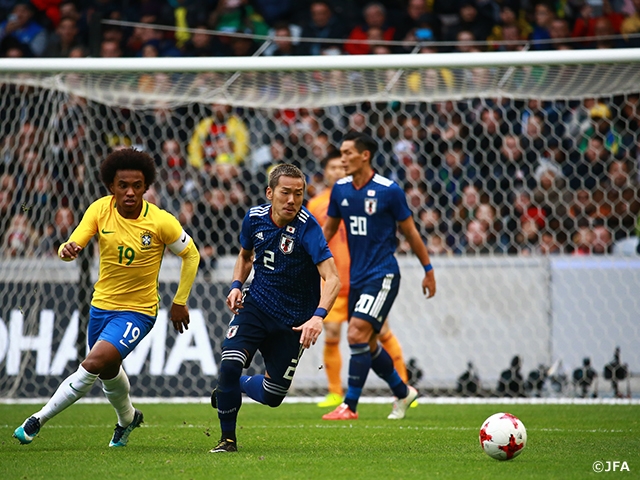 In the 62nd minute, forward OSAKO Yuya (1.FC Koln) controlled the ball before passing it to defender NAGATOMO Yuto (FC Internazionale Milano), who made his 100th match appearance as a Japanese international, and the sequence resulted in a left corner kick. Midfielder IDEGUCHI Yosuke (Gamba Osaka) delivered it to the far side, where Makino headed in for the first goal. Japan had scored against Brazil for the first time since the FIFA World Cup in 2006.

Then, in the 87th minute, Inui earned and took a free-kick on the left flank, where he aimed Sugimoto waiting in the middle, but the Japanese striker's header which went into Brazil’s goal was judged offside.

In the additional time, Japan created one last chance. Defender SAKAI Hiroki (Olympique de Marseille) set up Asano’s shot inside the box, but his attempt missed the target, before the match ended with Japan falling 3-1 to Brazil.

Japan National Team are scheduled to face Belgium in the next friendly match in Bourges, Belgium on Tuesday 14. 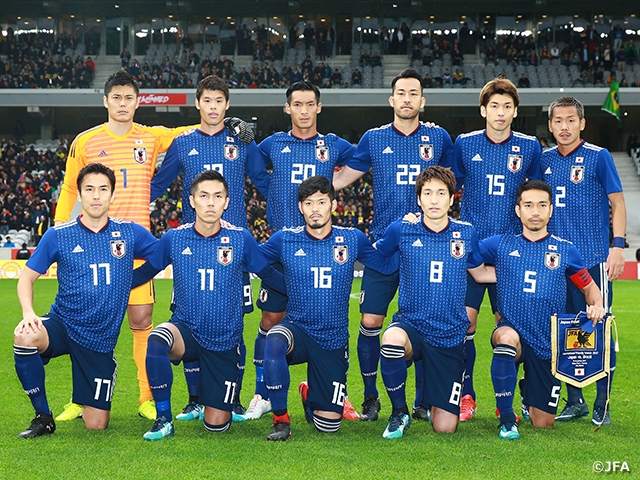 Vahid HALILHODZIC, Coach of SAMURAI BLUE (Japan National Team)
There were two key points to be noted in the first half. First of all, I am not satisfied with the mentality in which our players played in the first half. Some immaturity showed, and we allowed a goal before we got settled into the game. Secondly, the opponents took advantage of the situation and added more goals. However, in the second half, our positioning was better, as we started to put pressure from the frontline and confronted the opposing players at a closer distance in one-on-one battles as well as reading and predicting the plays much better. If we had been able to play more composedly after regaining possession, then with slightly better luck, we could have created several more scoring chances. Losing doesn’t make me happy, but I am somewhat satisfied with how we played against the best team in the world in the second half. It gave us some hope as well. The key is to learn and avoid making the same mistakes again. We must take advantage of this match and improve our team as well.

DF #19 SAKAI Hiroki (Olympique de Marseille)
It was disappointing. In the second half, the opponents lost interest and they looked as if they were playing avoiding possible injuries. Still the quality of their plays was high. At least, I felt that we have to keep the level of our plays as we did in the second half.

DF #22 YOSHIDA Maya (Southampton FC)
I felt sorry for my reckless foul that caused the intensity with which the team had been playing from the beginning of the match to drop. I experienced the VAR system for the first time, and it was an important lesson for me as well. Regardless of the group that we play in the World Cup, Pot 1 teams will be as strong as Brazil. We need to expect and prepare it accordingly.

MF #2 IDEGUCH Yosuke (Gamba Osaka)
I experienced first hand the difference in the level of football both individually and collectively. The speed of transition going from 0% to 100% was remarkable, and it was much quicker than what I saw in the videos. If we had been able to trap them more often, then I think we could have executed better attacks as well.

ADENOR LEONARD BACCHI (TITE) Coach, Brazil National Team
We created many chances and scored goals in the first half. I think our plays in the first half alone deserved the win today. Japan came out aggressively and we had a difficult time coping against their pressure from the frontline. In addition, they have several players who are playing in Germany and other countries abroad and I didn’t think that they felt strong pressure confronting us. I further believe that they have the mentality to do the right thing correctly as well.