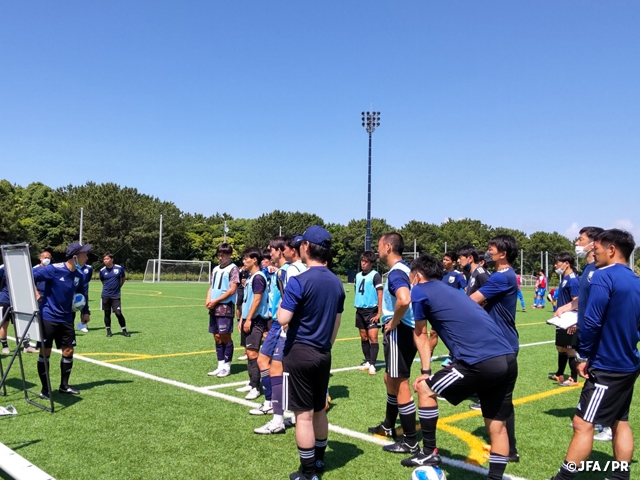 This year, the second module of the Class S Coach Training Course was held at Prince Takamado Memorial JFA YUME Field on the scheduled date, after being held online in 2021. An "in-between learning" period lasted about a month following the end of the first module, during which instructors visited each club while the participants also worked on a number of assignments on their own. In the presentations given in this module, which was introduced to the second module starting last year, participants were assigned with a coach who is active in Europe, researched and summarised his/her career and tactics, and presented their findings. The quality of the materials produced by the individual participants has been improving year by year, both in terms of video editing techniques and composition. 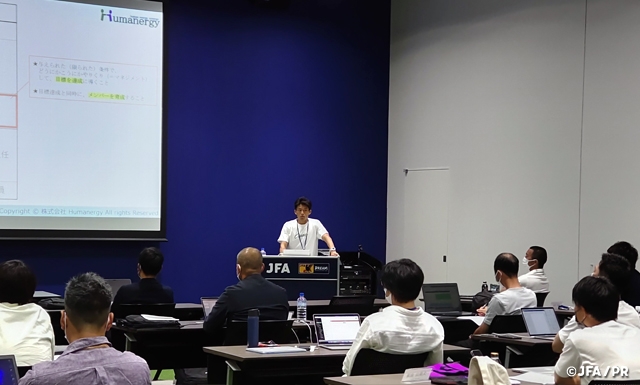 Mr. KITA Makoto (FC Tokyo U-15 Musashi)
Following the conclusion of the first module, each participant returned to their team for an "in-between learning" period during which we worked on our own assignments while continuing to engage in daily coaching activities. During this time, the instructors visited the teams of each participant to observe our training sessions and provide valuable advice after the sessions.

Entering the second module of the Class S Coach Training Course, which started on 30 May after the "in-between learning" period, the participants seemed to be more relaxed and engaged in the course.

In the coaching sessions, training was conducted on seven different themes. As a coach, we were conscious of how clearly we could translate our tactical concepts to the players. The participants have become more active in the discussions held after each coaching session, and the discussions have become deeper and more meaningful, which will help us move on to the next stage.

In the presentation exercise, the participants took turns to present the personalities and tactics used by coaches in the European leagues. The participants made use of the "communicative skills" they had learnt in the lectures to develop their presentations, displaying their individuality and ingenuity in the use of high-quality visuals and intonated speech to appeal to the hearts of the audience.

Mr. FUKUTOMI Shinya of Tokyo Denki University taught us team building techniques based on leadership and followership, where he mentioned, “Leadership, where only the head coach makes decisions, can be an effective management technique under certain conditions. However, the limits of the head coach can easily become the limits of the entire organisation.” On the other hand, “In followership, where the head coach is also involved in the decision-making process, opinions that exceed the coach's ideas tend to emerge, and it is much easier to demonstrate the power of the entire team.” The participants learnt that this type of team management enables them to work in a challenging era of football, where there are no absolute solutions, and full of uncertainties.

Mr. NAKAYAMA Masao, Director of JFA Promotion Department, spoke about the “JFA Grassroots Declaration.” The participants learnt about initiatives to provide many people with lifelong encounters and involvement with football, as well as the development and enhancement of the football environment for the various grassroots categories. We were strongly reminded of the importance of grassroots, that all top athletes are born from grassroots and that without grassroots, the national team would not be strengthened, and that increasing the number of people who love football will lead to further development of football in Japan.

In the lecture on "Japan's Way," students analysed the strengths and weaknesses of the Japanese people, the opportunities and threats to the growth of Japanese football and discussed them from various perspectives. Mr. KAGEYAMA Masanaga, JFA Director of Youth Development, mentioned that “many Japanese players are now playing abroad, which proves the high capability of Japanese players. In order for Japan to win the World Cup, it is important to raise the environment surrounding football to the world standard.” I strongly felt that each of us need to work together for the good of Japanese football.

In Professional coaching theory, JFA Instructor UKISHIMA Bin taught us about team management, where he explained, “Fostering a good relationship between the head coach, the club, the staff and the players is an essential part of achieving a goal." On the last day, Mr. ISHII Masatada, who has coached Kashima Antlers and Omiya Ardija in the past and is currently the head coach of Buriram United FC in Thailand, was invited to give a lecture. Mr. Ishii spoke about the importance of having a wide scope of team management, which covers the club, owner, staff and players. He also shared a valuable story from his own experience: "I have supported the head coach as an assistant coach for a long time, but when I became a head coach myself, I realised that there are so many decisions to be made. In order to make the right decisions, it is important to have a solid concept as a coach".

Once again, the instructors and lecturers, as well as my fellow participants, gave me a lot of insights and new findings. I would like to express my sincere gratitude to all the people who made it possible for me to spend such a fulfilling time.

Last but not least, I would like to thank all the students who participated as support players and the many people involved in organising this course. We look forward to working with you in the coming courses.

Next time, we will share the report of Mr. KUBOYAMA Yoshikiyo (Shimizu S-Pulse). 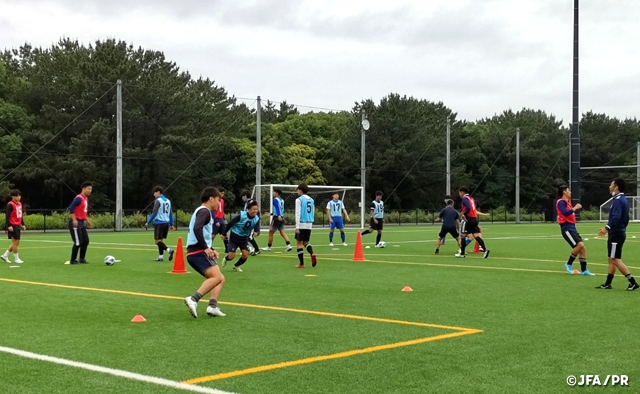