On Thursday 24 March, the SAMURAI BLUE (Japan National Team) faced the Australia National Team in their ninth match of the FIFA World Cup Qatar 2022™ AFC Asian Qualifier (Road to Qatar) at Stadium Australia in Sydney. With their late substitute MITOMA Kaoru (Royale Union Saint‑Gilloise) scoring two goals in the closing minutes of the match, Japan defeated Australia 2-0 to secure their sixth consecutive win in the group as well as their spot into their seventh consecutive FIFA World Cup™. Australia are now set to play in the third-place play-off against the third-place finisher of Group A.

As a result, Japan have now accumulated 21 points from seven wins and two losses, with their final match against Vietnam still left to be played (3/29@Saitama). In addition, with Saudi Arabia drawing 1-1 against China PR at a different venue, Japan has surpassed the Saudis who have 20 points with the same number of matches played.

In a match that kicked-off under the pouring rain, the Japanese side started off by showing great aggression, as they aimed to exploit the space behind the opposing defence by delivering vertical passes to their speedy striker Asano. While attempting to initiate fast breaks in the centre, Japan also utilised the width of the field, as Nagatomo came close to creating an opportunity in the 19th minute, when he broke into the penalty area from the left side. Minamino was also involved in many of the chances created in the first half, as his shot in the 28th minute went just wide of the goal, before seeing his shots being denied by the woodwork in the 32nd and 37th minutes. 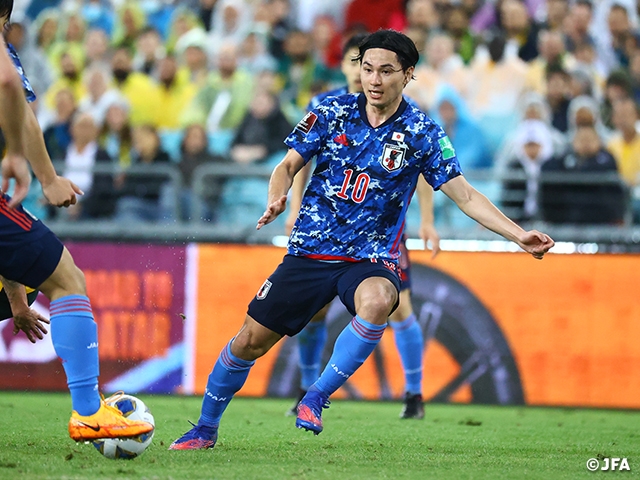 Despite missing a chunk of their core players due to injuries and Covid-19, Australia, who needed a win to keep their hopes alive to finish within the top two spots in the group, also had their share of opportunities in the first half. In the 25th minute, a corner kick delivered by Martin BOYLE sailed over the head of Gonda, deflected off the head of Yamane, and tricked into the goal. However, the goal was not given after the referee ruled that there was a foul committed to the Japanese goalkeeper.

As Australia continued to anticipate for their chances to counterattack, Ajdin HRUSTIC made a run down the right side before delivering a superb cross that found Mitchell DUKE unmarked inside the box, but the striker’s header went straight into the hands of Gonda.

After the first half finished 0-0, the second half saw Japan dropping their pace by slowing passing the ball to keep possession of the ball. In the 64th minute, coach MORIYASU Hajime made the move to bring in UEDA Ayase (Kashima Antlers) and NAKAYAMA Yuta (PEC Zwolle) to replace Nagatomo and Asano. Five minutes later, Ueda took a sharp shot from just outside the box which went just wide of the target. In the 80th minute, Ito delivered a fine through-ball to allow Morita to break inside the box, before the midfielder cut the ball back towards the centre, but the shot taken by Minamino was blocked by Trent SAINSBURY who made a sliding effort in front of the goal. 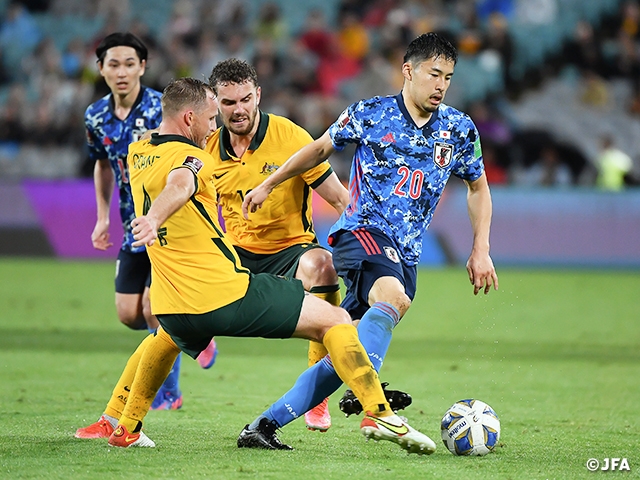 Still needing a win to clinch the World Cup, Japan made their final move in the 84th minute, as coach Moriyasu introduced Mitoma and HARAGUCHI Genki (1.FC Union Berlin) to add layers to their offence. Four minutes later, Yamane played a brilliant pass-and-go with Morita to penetrate the right side, before sending a cross into the mix. It was Mitoma who connected with this delivery, as the late substitute slotted the ball into the far corner to give Japan the long-awaited lead. 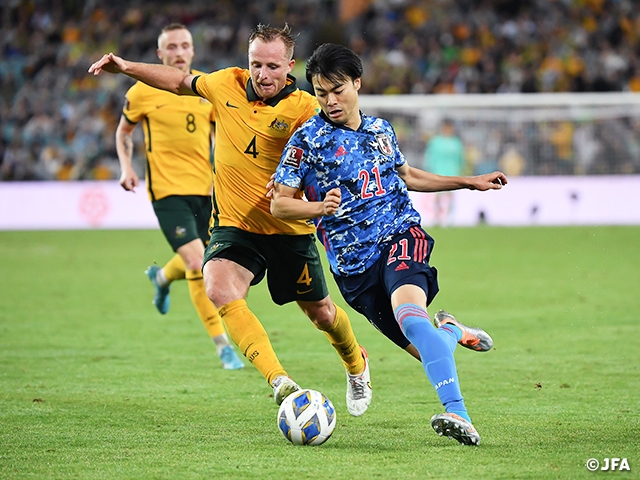 Mitoma, who scored his first international goal in his second cap, showcased an outstanding individual effort to score his second goal during additional time. After receiving the ball in the left side, the winger used his speed to dribble past three defenders before firing a right footed shot that deflected off the hands of the Australian goalkeeper and into the net.

Propelled by the brace scored by Mitoma, Japan earned their fifth consecutive shutout victory and their ticket to Qatar. Japan is now in position to finish the group in first place with a win over Vietnam on Tuesday 29 March.