HOME > NEWS > “A child’s smile is a pass to the future” 10 years since the Great East Japan Earthquake – Relay Column Vol.12

“A child’s smile is a pass to the future” 10 years since the Great East Japan Earthquake – Relay Column Vol.12 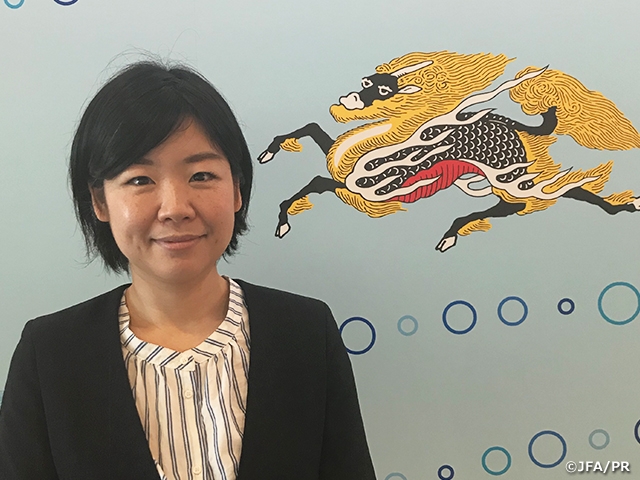 For the 12th column, we will share the essay of Ms. YANO Mari of Kirin Holdings Company, Limited Brand Strategy Department, who was involved in the activities of the “JFA-KIRIN Smile Field” and “JFA-KIRIN Big Smile Field.” 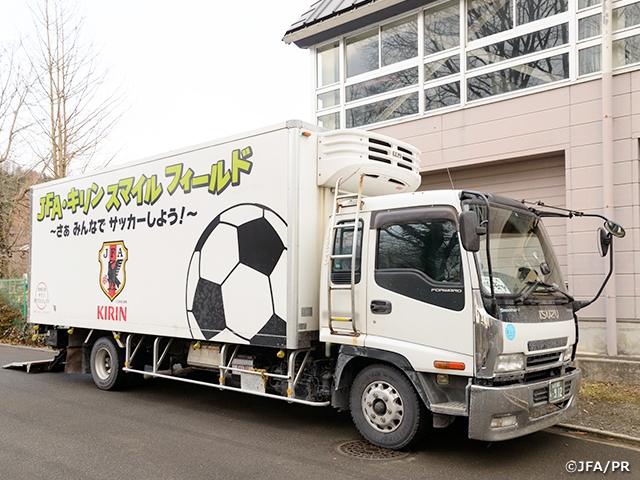 Three months after the Great East Japan Earthquake, which happened on 11 March 2011, the Kirin Group launched the “Kirin KIZUNA Relief-Support Project” with the theme of “cultivating bonds.” Co-sponsored by JFA, a football clinic called the “JFA-KIRIN Smile Field” was also launched in September of the same year. Here I would like to share the stories of “Smile Field,” which was attended by more than 100,000 children from 693 schools in Iwate, Miyagi, and Fukushima, from September 2011 to March 2017, and the “JFA-KIRIN Big Smile Field” which followed.

I have been involved with “Smile Field” since 2015, but I have heard various stories from the people who were involved in the launch of the project. The first thing they worked on was to carefully listen to what the victims really needed. While listening to the board of education and primary school teachers from the affected prefectures in Tohoku, we learned that the children were not getting enough opportunities to exercise at the evacuation sites, and that the children were not having much fun. That was when the idea came up to bring football coaches to the affected areas. The concept was to deliver football along with a fun time for the children, and after consulting with JFA, “Smile Field” was born. In order to hold football clinics at primary schools in the affected areas, the understanding and cooperation of the board of education and teachers, and the support of each prefectural football association were indispensable. After thoroughly explaining the purpose to gain understanding, we decided to go around in order from the schools that raised their hands to host the clinics.

The first session was held on 1 September 2011 at Higashi Miyagino Primary School, where former members of the Japan National Team, Mr. AKITA Yutaka, Mr. KOJIMA Nobuyuki, Mr. NAKANISHI Eisuke, Mr. NARAHASHI Akira, and Mr. IWAMOTO Teruo participated as the coaches. Although the children looked nervous at first, they eventually showed great enthusiasm chasing the ball around, and at the time the session was over, they surrounded the coaches saying, “Don’t leave yet” and “Please come back again.” Once the session was held, teachers acknowledged that this was a meaningful event and through world of mouth, the number of schools wanting to host the clinic increased. The project team was determined to deliver the clinic to all schools who raised their hands, as the number of participants reached over 100,000 people.

From September 2017, “Smile Field” changed its name to “Big Smile Field.” The basic concept remained the same, but the project team decided to expand the scope from schools to the entire region and make it an event that can be enjoyed by a larger community. This change was partly due to the effects of the environment change seen at the affected areas. The original purpose of Smile Field was to provide a place where children can release their stress caused by the earthquake. However the recovery level varied depending on the location, and while some schools wanted to host the football clinic as part of their P.E. class, some specifically needed the time and space where people can temporarily take a break from the reconstruction process. That difference has made us rethink about our presence and what we needed to do to truly support the recovering areas.

After being involved with Smile Field for six years, I realised that children’s smiles brought smiles to adults, and adults’ smiles created positive vibes in the area. It was a chain link reminiscent of the soccer ball getting passed around in a football match. This was part of the reason why we shifted from attending schools to a larger community. As we consulted with local governments about our activities and the philosophy behind them, we were often offered with places to hold our events and introduced with people and companies that could support our activities. From the preparation stage, we became more and more aware of the importance of the human bond. Big Smile Field was not only a football clinic, but a place where even adults can enjoy, as we prepared football attractions and markets where people can enjoy local cuisines. We are grateful to those who agreed with our purpose of reaffirming the beauty of our hometowns and setting up booths to promote their hometown’s local specialities. The event wouldn’t have been successful without everyone in the community working together as one team.

Looking back, it was an activity we started from scratch, so we were always questioning ourselves, “Are we doing the right thing?” We sometimes thought maybe we are being arrogant to think that we can energise the people of the affected area. When we had doubts in our mind, we tried to focus on creating events that would not cause any inconvenience to the local people and making it something they can truly enjoy. Through this project, I believe that JFA and Kirin Group has really become a “one team.” When we made the shift from Smile field to Big Smile Field, we had a big dilemma about the direction we were heading. Can we still protect the value of this project? Can we convey our true intention? What is our purpose and what are we trying to achieve? Can we achieve that goal with this approach? We shared all of these concerns with JFA and through countless discussions we were able to come through with a great project, so I am truly thankful for our companionship with JFA.

At a personal level, I feel like I was able to learn so much from this project. The thoughts of “doing something good,” and “helping others through football,” are of course wonderful intentions, but it is even more important that you work with compassion and listen closely to what people actually need. That is one of the biggest things I have learned. It is also important that we keep an objective perspective to understand what is going on around us. If we can assess the situation and provide proper needs, that is when new values are created. Football has an enormous power. A single soccer ball can connect total strangers and build bonds between adults and children. It brings excitement to our body and soul. By watching the radiant smiles of the children, we were able to feel hopeful that we have a bright future ahead of us. And that is the power of football. 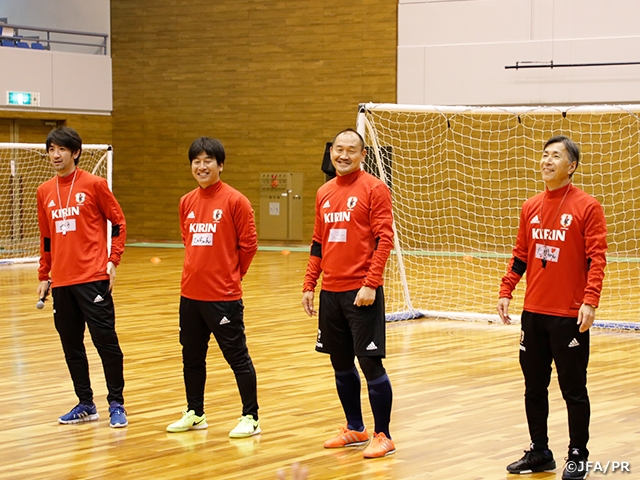