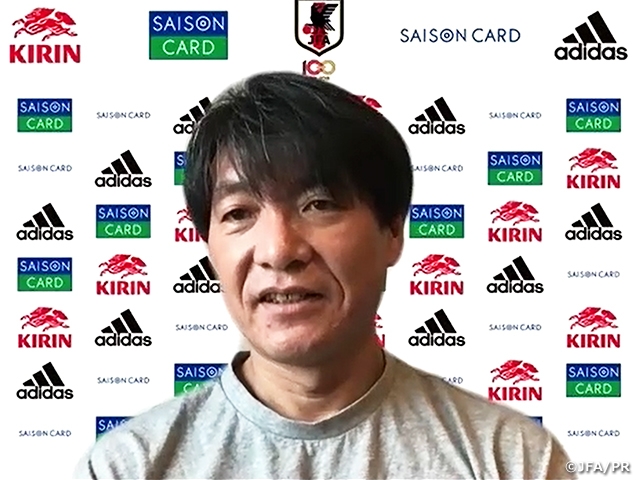 One day ahead of their second match of the SAISON CARD CUP 2021 against the U-24 Argentina National Team at Kitakyushu Stadium, the U-24 Japan National Team held an official training session and an online press-conference on Sunday 28 March.

At the beginning of the press-conference, coach YOKOUCHI Akinobu reflected on their first match against Argentina, “The 0-1 loss gave us many homework and there were many positives from that match as well.” The coach followed by sharing his aspiration for the second match, “We will make the most of the loss and prepare ourselves in the best way possible to deliver a victory to our fans.”

With the matches being scheduled with only two days in between, the players are forced to prepare under a tight schedule. However, it is already determined that the Tokyo Olympics will be held in a similar match schedule, so this will give the two teams an opportunity to simulate the Olympics. 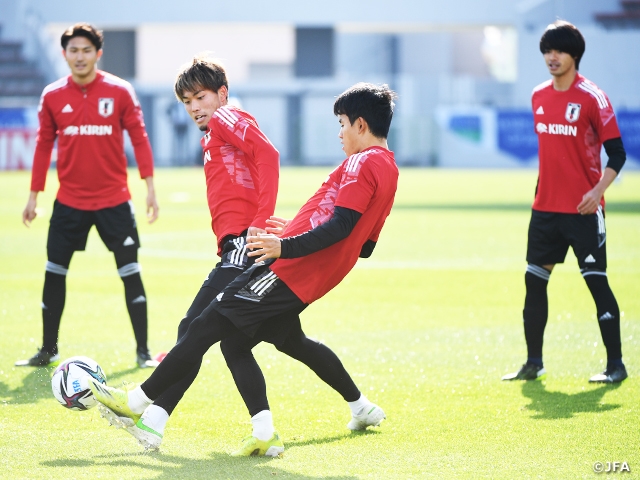 Regarding how the team is preparing for the second fixture, coach Yokouchi mentioned, “At the moment, we are seeing a variation of conditions among the players. We will plan out how to approach the match ahead of today’s training session.”

The coach also emphasised the need to make adjustments against the South American side, “We now have the experience of playing against Argentina, as well as the scouting report on them. We must find ways to take advantage of the resources, but we don’t have much time, so we must be efficient about it.”

The team held a training session at the match venue, Kitakyushu Stadium, in the afternoon. The session was opened to the media for the first 15 minutes, where players conducted warm-ups, ball possession game, and conditioning menus to prepare for the match.

The U-24 Japan National Team will seek to win the second leg against Argentina when they face them on Monday 29 March with a kick-off time of 19:45 at Kitakyushu Stadium. 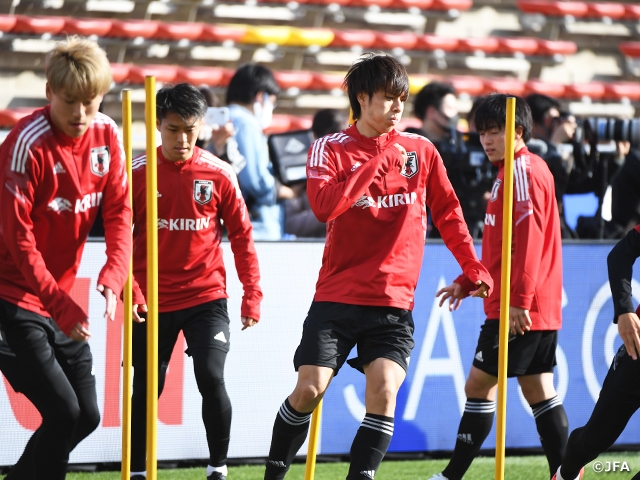 YOKOUCHI Akinobu, Coach
Including the staffs, the entire team is delighted to be able to play in these matches. Despite the tough environment, we all believe that the national team activities are so important, so we will give our best efforts to prepare for the match. Are team is getting along well ahead of the Olympics. Although we lost our first match against a superior opponent, but we have another shot to redeem ourselves. In many ways, I am looking forward for tomorrow’s match.

DF #15 MACHIDA Koki (Kashima Antlers)
South American teams will fight hard for the ball, so we must focus on winning each one-on-one situation. After watching our first match from the bench, we were not able to create effective attacks in the final third, so I hope to provide stability and effective passes from the defence line. I also hope to utilise my height to my advantage and win the aerial battles. I am also a lefty, so I will focus on adding more options to our attacks.

MF #17 TANAKA Ao (Kawasaki Frontale)
I watched the first match from the stands and saw how strong and skilled the Argentinian players were. I didn’t actually face them on the pitch, so I don’t know how their intensity level was like, but I have an objective perspective on how we should approach our opponent, so I hope to utilise that to my advantage. If I am given the opportunity to play on the pitch, I will provide stability to our build-ups and help our team manage the game more smoothly.

FW #9 MESHINO Ryotaro (Rio Ave FC)
After watching the first match from the bench, I can tell that they played just as our scouting report suggested, and they were a very aggressive team both in offence and defence. But after I got on the pitch for the final 15 minutes or so, it felt like our opponent was faster than what we expected. The way their defenders approached the ball was quite unique, too. I hope to play an active role in our offence and get myself involved in our team’s goals.