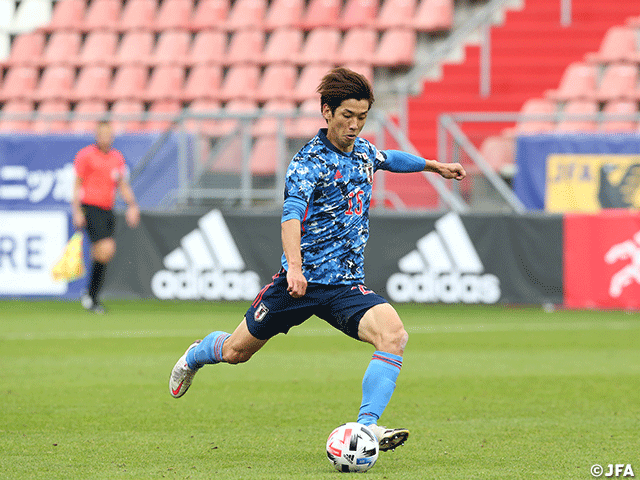 On Friday 9 October, the SAMURAI BLUE (Japan National Team) played in an international friendly match against the Cameroon National Team at Utrecht, Netherlands. With the effects of the ongoing corona pandemic, the match was their first match played in nearly a year and for the first time in Japan National Team history, the squad was selected only from players who currently plays in Europe.

Since November, the Japan National Team has not played a single match with their players playing in Europe, and with the Asian qualification rounds of the FIFA World Cup fast approaching in March, this match represented a wonderful opportunity for them to polish their team form. In the starting line-up, ANZAI Koki (Portimonense S.C.) was named as the left fullback to make his first start since March 2019, while NAKAYAMA Yuta (PEC Zwolle) started as the defensive midfielder since he last started in June 2019.

The match kicked-off with Japan applying aggressive pressure from the frontline, but the team could not create any attacking threats, as they struggled to find their rhythm in the early minutes. Japan gradually picked up their pace, as MINAMINO Takumi (Liverpool FC) struck a shot in the 19th minute, followed by a set-piece taken in the 21st minute, where YOSHIDA Maya (U.C. Sampdoria) connected with a delivery from SAKAI Hiroki (Olympique de Marseille), but the attempts were denied by the opposing GK.

OSAKO Yuya (Werder Bremen) tried his luck in the closing minutes of the first half, while SHIBASAKI Gaku (CD Leganes) and HARAGUCHI Genki (Hannover 96) combined in the 43rd minute to setup a shot attempt by Minamino, but both attempts fell short from capturing the goal. 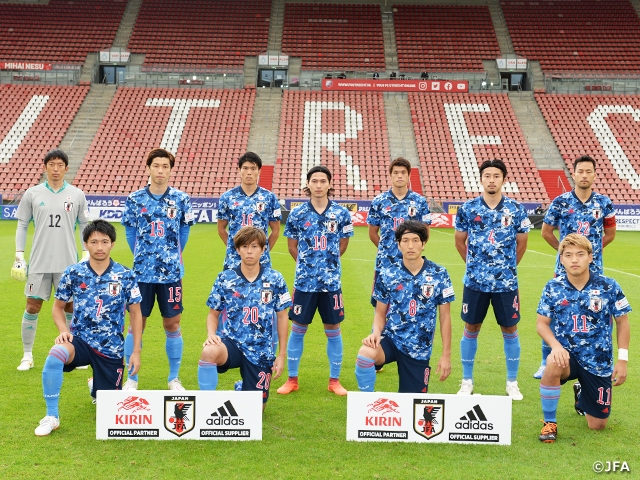 Ahead of the qualification round of the Africa Cup of Nations in November, Cameroon National Team also formed their squad mainly with players playing in European clubs. Despite missing two of their players who tested positive for the PCR test and one player who was in close contact with them, the team showed a great performance on the pitch, as they showcased their athleticism and speed, while also utilising the width of the field to create opportunities. Once winning the ball in midfield, the team collected the ball to Serge TABEKOU and Karl Toko EKAMBI, who penetrated the right flank to threaten the Japanese goal. A close chance was created in the 14th minute, when Moumi NGAMALEU connected with a cross to strike a header. Another opportunity was created in the 29th minute, when Michael NGADEU-NGADJUI stuck a header off a corner-kick, but the Japanese defenders responded to both shots to keep the clean sheet intact.

Although it was Cameroon who took control of the match in the first half, the tides shifted in the second half. In order to change the rhythm of, MORIYASU Hajime brought in ITO Junya (KRC Genk) to replace Anzai and changed their system from a four-back to a three-back system, allowing Ito to utilise his speed to penetrate the right flank. With this change in formation, Japan created a close opportunity in the early minutes of the second half, as Ito delivered a cross from the right side to allow Osako to strike a header, but his effort failed to find the net.

With the team adding more layers to their offence, Japan started to be the aggressor of the match. Cameroon responded with a shot taken by Tabekou in the 51st minute, but the shot was saved by GONDA Shuichi (Portimonense S.C.). André-Frank Zambo ANGUISSA also struck a shot in the 57th minute, but his attempt did not hit the target.

In the 65th minute, KUBO Takefusa (Villarreal CF) was brought in to replace DOAN Ritsu (DSC Arminia Bielefeld), and KAMADA Daichi (Eintracht Frankfurt) was introduced to the match in the 71st minute to replace Minamino. SUGAWARA Yukinari (AZ Alkmaar) made his national team debut on the 86th minute to give Japan the final push.

In efforts to break the deadlock, Kubo dribbled up the left flank in the 84th minute, before sending a cross to Osako, but the striker fell short from connecting with the delivery. With time running out, Ito earned a FK deep in the opposing territory. It was Kubo who took the spot kick, but his attempt was saved by the opposing GK, as the match ended in a scoreless draw.

The SAMURAI BLUE will face the Cote d'Ivoire National Team at Stadion Galgenwaard on Tuesday 13 October. 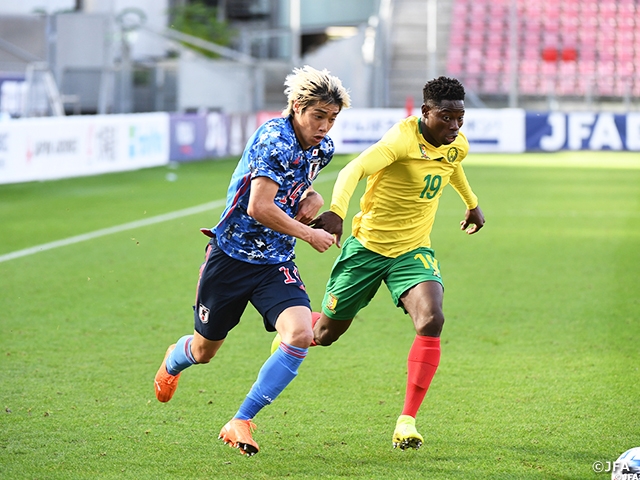 MORIYASU Hajime, Coach of SAMURAI BLUE (Japan National Team)
With this being our first match in nearly a year, there were many scenes where we had to find our rhythm on the pitch, but the players gave their best efforts until the very end to showcase a performance that can send energy and encouragement to the people in Japan. Cameroon is an extraordinarily strong team and we saw ourselves being forced to play defensively in the early minutes, but our combinations got better as the match progressed. Our defenders played tenaciously to keep a clean sheet, but our offence lacked quality in the final third to convert our chances, so we must heighten the quality of our plays ahead of the next match. We have worked on the three-back system in training, and we utilised the system to change the rhythm in the second half. By having a player in the wide flank, we were hoping to create disturbance in the opposing defence line and penetrate the open space. We hope to change this draw into a win in our next match.

DF #22 YOSHIDA Maya (U.C. Sampdoria)
We do not often get to play against teams from Africa, so this was a very meaningful match for us, especially with our opponent being in great condition. We were able to tell that they are an extremely talented team from the very first play. With this being our first match in nearly a year, I personally was able to have a lot of fun, and 90 minutes went by so quickly. We did struggle to get on the same page during the first half, but we managed to make the necessary adjustments in the second half. Having the three-back system in our back pocket gives us a wider option as a team.

MF #4 NAKAYAMA Yuta (PEC Zwolle)
In the first half, we were not able to catch up with the opponent’s defensive midfielder, but once we switched to a three-back system, it made it much easier for us defensive midfielders to press forward, allowing us to apply more pressure in the midfield. Our aggressive approach in defence seemed to be effective in this match, but it would be much better if we can increase the time with the ball in offence.

MF #10 MINAMINO Takumi (Liverpool FC)
With this being our first match in a while, we really wanted to win this match, so we are not satisfied with this 0-0 draw. I focused on stimulating the team’s offence, but this was a difficult match, and I was not able to create as many opportunities as I hoped for. We were not able to defend well against the opponent’s midfielders and the #7 player, and that is an aspect we must improve on. After changing the formation in the second half, we were able to play much better. I was not aware of the goal streak I was on. I do not care much about records, but it was unfortunate that I was not able to contribute to the team’s victory. I will give my utmost efforts to help the team win the next match.

MF #17 KUBO Takefusa (Villarreal CF)
The match was turning into an open-game, so I entered the match with the intention to carry the ball into the open space. A substitute must be able to change the dynamics of the match, and I feel like I had to be more composed and try more things on the pitch, but I am glad that I was given the opportunity to play today. I just need to produce results. When I took the last free-kick, I noticed that their wall was a bit off, so I took my chance, but the opposing GK made a fine save.

FW #15 OSAKO Yuya (Werder Bremen)
There were some critical opportunities I wish I had capitalised, but the opponent was an incredibly good team and the match turned out to be a very productive match for us. We struggled defensively in the first half and consumed way too much energy in defence. We managed to clear the issue in the second half and created more chances upfront but lacked the quality to win the match. It has been more than a year since I last played, so I struggled to find the right distance with my teammates, but I managed to make adjustments as the match progressed. The more time we spend together, the more we get better, so we will continue to strive to become a better team.

Antonio Conceicao da SILVA OLIVEIRA, Coach of Cameroon National Team
Although we were missing a few players, the remaining players performed well today. Our players entered this match with great dedication and showcased a positive performance against a strong team like Japan. We are satisfied with this result and hope to prepare ourselves ahead of our match against Mozambique at the Africa Cup of Nations qualifications in November.