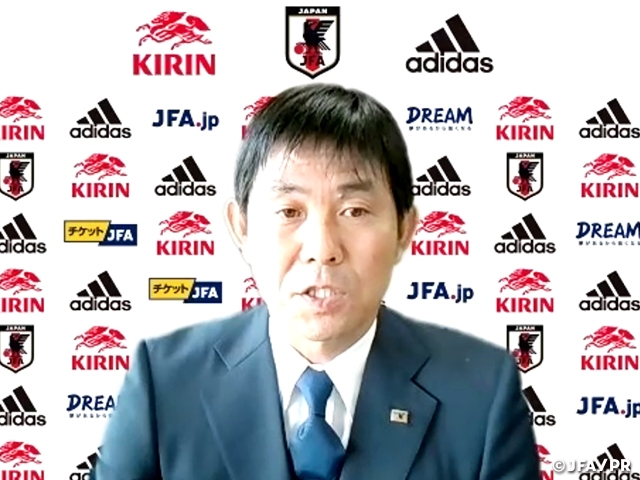 On Thursday 1 October, coach MORIYASU Hajime of the SAMURAI BLUE (Japan National Team) announced the team squad for their Netherlands tour, scheduled to take place from Monday 5 October. With the team being assembled for the first time in nearly a year, the coach shared his aspiration to “Unity the players’ purpose and bring harmony between the veterans and the youngsters.”

25 players were named into the squad. In consideration of the voluntary isolation period set for COVID-19 prevention, players from Japan were not selected into this squad, as the entire team was formed, for the first time in Japan National Team history, by players belonging to European clubs.

When asked about Okazaki, a 34 year old striker who has helped SD Huesca get promoted to La Liga last season and started in four matches from the start of this season, coach Moriyasu mentioned during the online conference, “Regardless of the league or situation he is put in, he has always proved his value,” explaining that age is not a criteria for the players’ selection. Regarding Sugawara, the coach has mentioned that he has been monitoring his plays with the U-23 national team and his club, “He has the potential to become a regular member of the senior team in the close future.” SUZUKI Musashi (Beerschot AC), who has transferred to a club in Belgium this August, and MUROYA Sei (Hannover 96) who has relocated to Germany were also selected, but players from Serbia and Russia were not selected due to the travel restrictions set between the European nations.

With the effects of COVID-19, all international match days were cancelled since March. The Asian qualifiers for the FIFA World Cup were also postponed, making this the first activity for the national team since last November. Ahead of the tour, coach Moriyasu shared his gratitude, “We are delighted and grateful to be given this opportunity to play as the national team. This was only made possible with the support of many people, so the players and staffs will enter this tour with a sense of gratitude.” The coach continued by saying, “We will first go over the team’s basic concepts and strive to unity the players’ purpose.” In regard to the fact that the U-23 team has not been able to conduct their activities ahead of next summer’s Tokyo Olympics, coach Moriyasu, who is also in charge of the U-23 squad mentioned, “We have also selected players with less experience. We hope to bring harmony between the veterans and the youngsters to raise the individual level and heighten the overall level of the team.”

Ahead of their matches against Cameroon National Team and Cote d'Ivoire National Team, the Japanese general summed up their intentions, “We must focus on what we have been working on, have the players showcase their full potential, and fight through the competitions with teamwork, which is one of Japan’s biggest strengths.”

The team will be assembled in the Netherlands on Monday 5 October to start their trainings.

As part of the measures to prevent the spread of COVID-19, the training camp and matches will be held in a bubble, limiting the activities to be held in one venue located in Utrecht. The team will charter an entire section of a hotel and limit unnecessary contact from outside. Ahead of the matches, PCR tests will be conducted to all players and staffs of the participating teams. In addition, SmartAmp tests will be conducted to all staffs departing from Japan and travel with an infection-negative certificate.

With the tour being conducted during the global pandemic, Technical Director SORIMACHI Yasuharu mentioned, “We will take all necessary measures to prevent the spread of COVID-19.” The technical director also shared his aspiration towards the team, “We hope this tour will help the team ahead of the long qualification rounds of the World Cup. We will demand both positive details and results from the Japan National Team.” 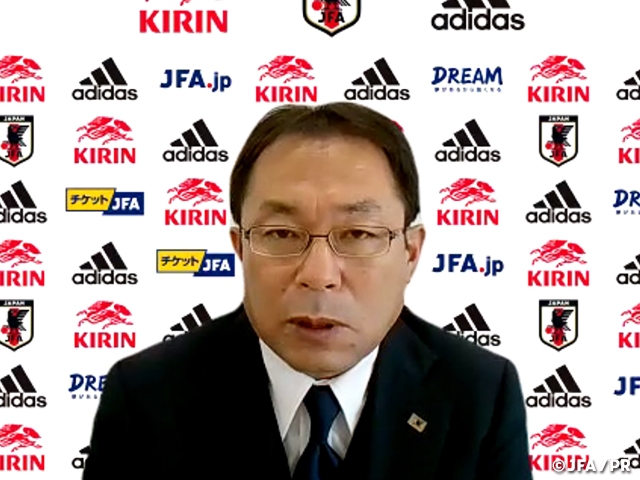 MORIYASU Hajime, Coach of SAMURAI BLUE (Japan National Team)
This tour was made possible with the tireless efforts of many people, and we must not take for granted of their support. We must conduct ourselves and showcase a match that shows respect to those who have made this tour possible. The Japan National Team must become a team that can contribute to the society. With the team striving for victory and winning the matches, we hope to provide joy to our supporters and dreams to our children. Many people have been affected and hurt by the pandemic and natural disasters. Through our matches, we hope to give energy, courage, and strengths to those people. Regardless of the situation, each player will give their utmost efforts and play for the team. The team will strive to showcase a performance that proves that we can fight through any hardship if we stick together as a team. As a coach, I feel unfortunate that we were unable to conduct our team activity for nearly a year, but the players have worked hard at their own clubs to heighten their individual level, which ultimately helps to raise the overall level of the team. I will continue to monitor the players’ performance at their clubs and try to select the best possible squad. At this tour, I will check on each player’s condition, strive to earn results, and showcase a performance that can satisfy our supporters.

SORIMACHI Yasuharu, JFA Technical Director
We are grateful to be given this opportunity to conduct our tour to the Netherlands, and we would like to express our gratitude towards the Kingdom of the Netherlands, Royal Dutch Football Association, Embassy of the Kingdom of the Netherlands in Japan, Embassy of Japan in the Netherlands, and the staffs of JFA for making this tour possible. This tour will be held in preparation for the FIFA World Cup Asian qualifiers scheduled in March. The squad consists players playing abroad, and we are hoping that they will make the most of this opportunity to help the team win through the qualifiers.

SEKIZUKA Takashi, JFA National Team Director
I am thrilled that we are able to hold this training camp and matches at the Netherlands. The team does not consist any players from the J.League. Coach Moriyasu has explained that he has chosen not to select players from the J.League considering the fact that the league is requiring all players to conduct PCR tests every other week, taking strict measures to limit outside contact, the condense match schedule of the league, and the two week voluntary isolation period following the players’ return to Japan. We will prepare ourselves in the best way possible ahead of the matches against Cameroon and Cote d'Ivoire, to build the team for the FIFA World Cup qualifiers scheduled in March. 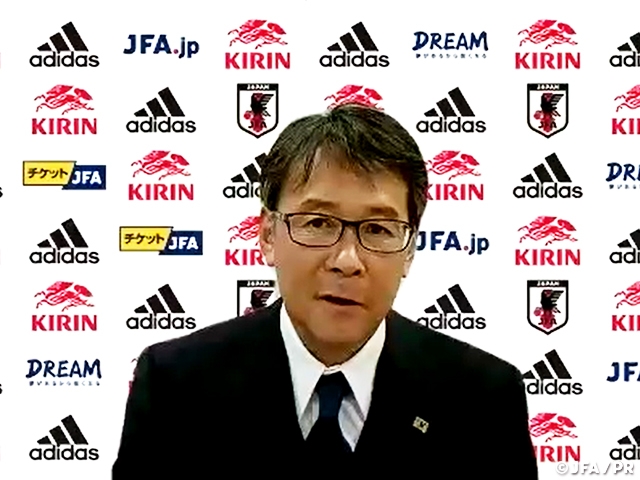 Footage of the conference

#SAMURAIBLUE Coach#Moriyasu Hajime announced the team squad ahead of the matches against Cameroon and Cote d'Ivoire.