The first leg of the AFC Champions League 2019 semi-finals took place on Wednesday 2 October, as Urawa Red Diamonds welcomed Guangzhou Evergrande Taobao (China PR) to their home stadium. With the help of goals scored by FABRICIO and SEKINE Takahiro, Urawa earned a 2-0 victory to take a giant step forward towards advancing to the final. The second leg will take place at Guangzhou on Wednesday 23 October.

Seeking for their third ACL tile, Urawa started off the match with great intensity and showcased quick ball movements against the Guangzhou side, who played five defenders at the back to minimise the damage in this first leg. In the seventh minute, Fabricio struck a shot from distance, followed by Sekine’s attempt in the 17th minute, but both shots fell short from capturing the goal.

With Urawa taking full control of the game, the opening goal came in the 19th minute, when Fabricio received the ball from Sekine before striking a powerful shot from outside the box. The fast driven shot went over the head of the Guangzhou goalkeeper, ZENG Cheng, and shook the net to give Urawa the lead.

The opening goal gave more momentum to the Urawa offence, as they created multiple opportunities following the goal. In the 26th minute HASHIOKA Daiki responded to a through ball delivered by NAGASAWA Kazuki to strike a shot from close range, but his attempt was blocked by the opposing defence. Sekine came close in the 35th minute, when he received the ball from KOROKI Shinzo before firing a shot, but his effort couldn’t hit the target.

The Chinese powerhouse, who has won the ACL title in 2013 and 2015, collected the ball to their powerful frontline featuring, PAULINHO, TALISCA, and ELKESON, but with Urawa showing great intensity to deflect off the passes, Guangzhou struggled to create major opportunities.

The second half saw Guangzhou making more efforts to level the match, as Talisca made multiple attempts to threaten the Urawa goal, but with the superb performance showcased by the Urawa defender SUZUKI Daisuke, the Chinese side fell short from finding the equaliser.

Urawa brought in MUTO Yuki in the 67th minute to add layers to their offence. The Japanese midfielder actively got himself involved in plays upfront to create opportunities. In the 75th minute, a corner kick delivered by Muto was deflected off by the Guangzhou defence, but Sekine responded to the loose ball and struck a right footed shot that pierced the left corner of the goal to double the Urawa lead. 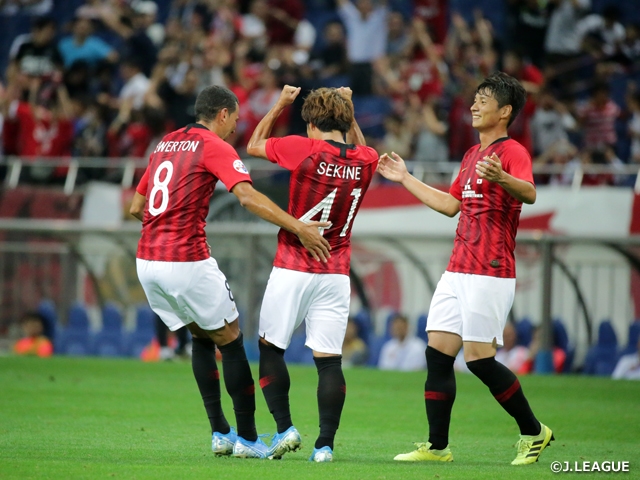 Now down by two goals, Guangzhou brought in GAO Lin and WEI Shihao in efforts to rally back. With Paulinho and Talisca dropping back in midfield, the Chinese side started to show great layers in their offensive plays. In the 84th minute, Wei responded to a pass delivered by Paulinho and fired a shot that shook the net, but this play was called offside. Guangzhou added more layers to their offence when they introduced YANG Liyu to the match, while Urawa responded by bringing in defender UGAJIN Tomoya to close out the match. Urawa showcased great composure until the end, as their defence limited Guangzhou to just three shots and earned a shutout victory with a final score of 2-0.

With this victory, Urawa ended their 10-game winless streak dating back to 14 August, when they won their match against Mito Hollyhock at the third round of the Emperor's Cup.

The second leg will take place at Guangzhou on Wednesday 23 October. Urawa will advance to the final with a draw or better. Even in case of a loss, they can still advance with a 0-1, 1-2 score, or any loss within a two-goal margin as long as they score an away goal. In case they lose the second leg 0-2, the winner will be decided in overtimes.

At the West division, Al Hilal SFC (Saudi Arabia) defeated Al Sadd SC (Qatar) 4-1 in an away game. The second leg will take place on Tuesday 22 October at Riyadh.

OTSUKI Tsuyoshi, Coach (Urawa Red Diamonds)
I am grateful for our home fans for creating this amazing atmosphere and also thankful for our players for showcasing a wonderful performance. The opponent came out the way we expected, and our players did a great job to make the necessary adjustments on the pitch. However, nothing is guaranteed yet, so we will continue to prepare ourselves ahead of the second leg. We are all aware of the significance of this stage, and our players have shown great motivation at this Champions League. We will give our utmost efforts to showcase another superb performance at the second leg.

DF SUZUKI Daisuke (Urawa Red Diamonds)
I think our defence played very well today, as we focused on applying pressure from the frontline. Our opponent changed their system during the match, but we were able to make the necessary adjustments on the pitch. We know that our opponent will come out attacking in the second leg, so we must prepare ourselves with a sense of urgency ahead of our next match.

MF SEKINE Takahiro (Urawa Red Diamonds)
In the scene where I scored the goal, the deflection came right at me and I just had to make good contact with the ball. This win means a lot for us and we now have a huge advantage ahead of the second leg. We hope to utilise this advantage to the fullest and make our way into the final.

FW FABRICIO (Urawa Red Diamonds)
I feel like our motivation and commitment towards this match was stronger. We played with great intensity and our opponents had a tough time keeping up with us. When I scored the goal, I saw the goalkeeper stepping forward, so I focused on hitting the target with a firm strike. It was my dream to play at the ACL, so I am very happy that I was able to score at this stage and with the team earning a clean sheet victory, a cannot ask for a better day.

Fabio CANNAVARO, Coach (Guangzhou Evergrande Taobao)
We knew we were facing a strong opponent, so were prepared for a tough match, but we didn’t expect to concede two goals in that fashion. We are now in a difficult spot, but we hope to redeem ourselves in our next match. We have many talented players and we still have plenty of chance to advance through to the final. We created at least two big chances, and one of them was called offside, but without VAR, we don’t know whether it was really offside or not. We will prepare ourselves with our eyes set on the next match.