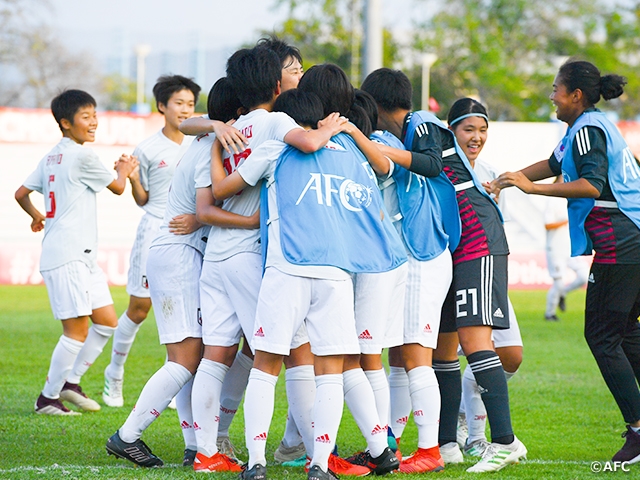 The Japanese squad had three days to prepare for this match and with the ticket to next year’s FIFA U-17 Women's World Cup India at stake, the team entered the match with great motivation. 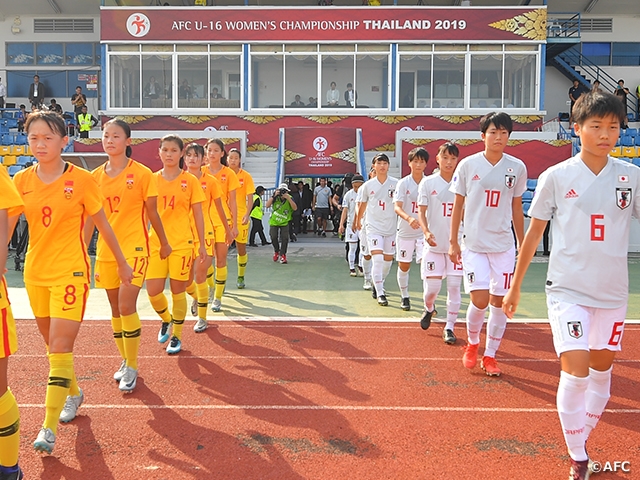 The match saw Japan taking the initiative in the early minutes, as the Japanese players showed great aggression to pressure the ball, but the team struggled to create major opportunities. On the other hand, China PR gradually picked up their pace following the 20th minute mark and started to collect the ball to their tall forward. In the 26th minute, NEBU Momoko delivered a pass towards the right flank to allow MINOWA Chisato to send a cross to the middle, where OYAMA Aemu awaited unmarked, but her shot was saved by the goalkeeper. With both sides falling short from scoring a goal, the match entered halftime scoreless.

During halftime, coach KANO Michihisa went over the team tactics to keep the players on the same page. However, the Japanese players continued to have a tough time finding their rhythm in the second half. In efforts to break the deadlock, Japan brought in an offensive player, HAMANO Maika, to replace one of their defenders, OGIKUBO Yuri, in the 68th minute. Soon after this substitution, the long awaited moment arrived for Japan. In the 71st minute, Oyama sent a pass into the open space to allow NISHIO Hanon to break through. The Japanese striker delivered a lobbing shot that went over the goalkeeper’s head and shook the net to give Japan a 1-0 lead. Japan doubled their lead in the 82nd minute, when Oyama orchestrated another goal with a lobbing pass into the open space. This time Hamano was the beneficiary, as the second half substitute dribbled into the box and slotted the ball into the left hand corner of the goal. Japan managed to keep a clean sheet and earned a 2-0 victory to advance to the final while claiming their ticket to the World Cup at the same time. 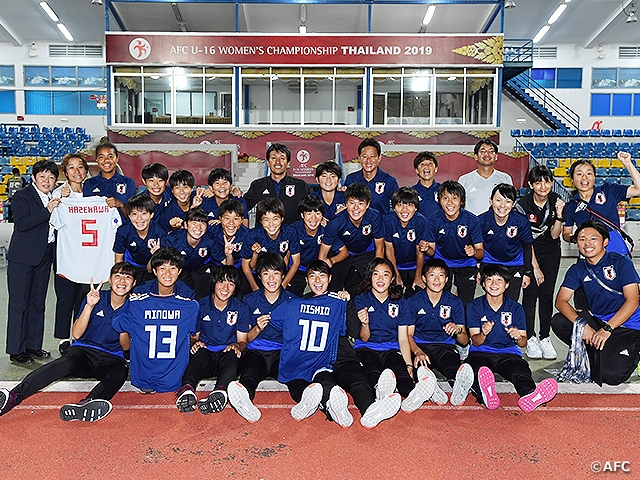 KANO Michihisa, Coach (Sagawa Shiga FC)
We knew this match was going to be a tough match from the beginning. Although we managed to enter the match with great aggression, we couldn’t find ways to score a goal. Despite their early struggles, the players did a great job to keep their patience and I was very happy when their patience got paid off at the end. We were slightly out of sync, and we were also too hesitant to take shots in the first half. After making the adjustments during halftime, we managed to score goals in the second half. Our team is capable of showcasing our strengths while containing the opponent’s strengths. Our opponent at the final, DPR Korea, has players with great physiques and athleticism. They are very skilful and capable of taking shots from distance, so we must make the adjustments accordingly and prepare ourselves ahead of the match.

DF #12 KOYAMA Shinomi (Cerezo Osaka Sakai Girls)
I entered this match as a fullback, but I had to work more closely with the midfielders to create opportunities at the flank. As a team, we struggled to score goals because we lacked quality at the final third. During halftime, we spoke about sending the ball into the open space to exploit the space behind the opponent’s defence line and we managed to get ourselves on the same page to score goals in the second half. Our defensive midfielders made quick transitions to allow us to collect the loose ball more often in the second half, which led to an improved performance towards the end. I am glad we have earned our spot into the World Cup, but our goal is to win the tournament title, so we will continue to work hard to achieve our goal.

MF #16 OYAMA Aemu (Nippon TV Menina)
We weren’t in sync with each other and struggled to score goals in the first half. We needed to close the gap between each other in order to execute our combination plays, so we spoke during halftime to keep the team compact on the field. We managed to get ourselves on the same page and showed great teamwork to score those goals in the second half. We are happy to earn our spot into the World Cup, but our team’s goal is to win the Asian title, so we will continue to work hard and prepare ourselves ahead of the final.

FW #10 NISHIO Hanon (Urawa Red Diamonds Ladies Youth)
Although we managed to enter the match with great aggression, we lacked quality in our plays at the final third and struggled to score goals at first. As a striker, I was told to shorten the gap between the other forward player, and after making the adjustments, I was able to create more opportunities in the second half. In the scene where I scored the opening goal, a great pass was delivered behind the opponent’s defence line, which allowed me to score that goal. After taking a 2-0 lead, we focused on keeping our composure and to showcase what we have been working on. I was so relieved and happy when I heard the final whistle, but our goal is to win this tournament, so we will prepare ourselves well ahead of the final.