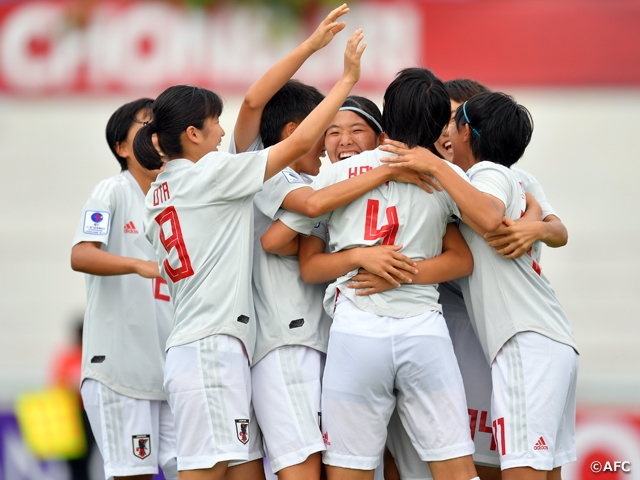 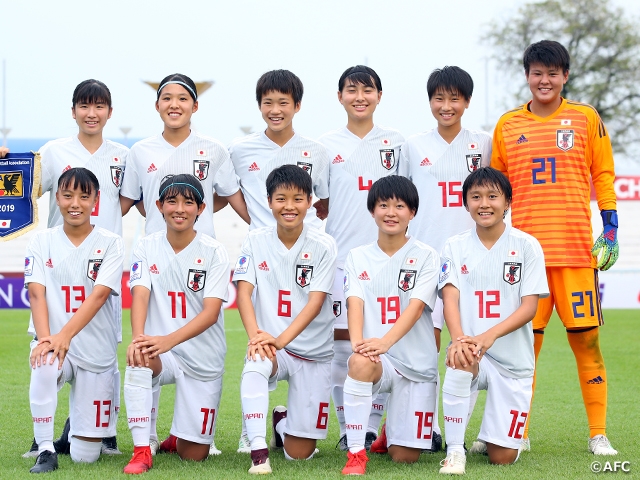 Ahead of the 4p.m. kick-off, coach KANO Michihisa gave directions to his players to play aggressively while keeping both of their offence and defence compact.

The team followed the coach’s words and got off to a scoring spree from the early minutes of the match. The opening goal came in the second minute, when HAYASHI Manaka broke through the right side of the field before striking a shot that deflected off the left post before finding the back of the net. In the sixth minute, NEBU Momoko delivered a through ball to allow HAMANO Maika to brake loose and score the team’s second goal. OTA Moe made it 3-0 with a mid-range shot taken in the 17th minute, followed by Hamano’s second goal of the match in the 23rd minute. Just before the end of the first half, Ota assisted the goal scored by Nebu to make it 5-0 at halftime.

Japan continued to show their dominance in the second half, as HIRANAKA Kyono reopened the scorebook by converting a corner kick in the 49th minute. Nebu marked her second goal of the match in the 51st minute, followd by back to back goals scored by TANNO Ririka in the 60th and 61st minute. The Japanese players shifted their positions throughout the half to test out different systems, but the scoring stopped for the final half an hour, as the match ended with a final score of 9-0. 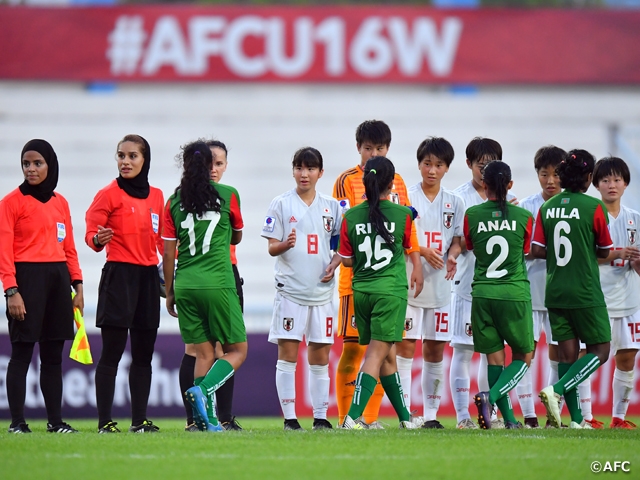 KANO Michihisa, Coach, (SAGAWA SHIGA FC)
After drawing our first match, it was important for us to win this match, so I am relieved that we were able to earn the desired result. In our first match against Australia, we got off to a slow start, so I told my players to play aggressively today, especially in the first 10 minutes. The fact that we were able to score two goals in the early minutes helped us gain momentum throughout the match. However, I wasn’t expecting to win with such a huge margin. We analysed Bangladesh ahead of this second match and had the impression that they are a very organised team who can execute their game plans collectively as a unit. The same thing can be said about our third opponent, Thailand. However, we will continue to focus on executing our own football. We will continue to prepare ourselves so that we can earn another victory like today.

DF #2 IDE Hinata (Fujieda Junshin High School)
We were able to enter today’s match with a very positive atmosphere, which allowed us to play with great intensity in the first 10 minutes of the match. I entered the match as a second half substitute, but I felt like I wasn’t able to send enough passes upfront, so I hope to do a better job in our next match. In defence, I knew our opponents were going to utilise many direct passes, so I was able to make the necessary adjustments to intercept the ball in many occasions. As a team, we were able to maintain our momentum to start the second half, but we lost our intensity as we started to get tired and we saw less and less combinations towards the end of the match. We also lacked quality in our plays at the final third, so we hope to address those aspects and push ourselves to do a better job in our next match.

DF #4 HAYASHI Manaka (JFA Academy Fukushima)
This was a match we couldn’t afford to lose, so I am glad I was able to give our team momentum by scoring the opening goal. Although I started as a fullback, I was told to take shots aggressively, so I was keen on scoring goals today. However, after we scored our third goal, we faced a difficult stretch, where we laced action and lost our intensity. That is an aspect we must address ahead of our next match. We switched up our formation in the second half, and I played both as a defensive midfielder and as an attacker, but regardless of where I played, our opponents came out fighting for the ball with great intensity. I felt that we need to become able to control the ball and finish our shots even under such intense pressure. We managed to stay vocal throughout the match and showed great composure to create opportunities, so we hope to continue with these positive trends.

MF #11 TANNO Ririka (Urawa Red Diamonds Ladies Youth)
I entered today’s match with the intention to work hard in both offence and defence, while getting myself involved in our team’s goals. Although I wasn’t able to collect the ball as much as I wanted in the first half, I managed to show my aggression and score goals in the second half. Following our match against Australia, we focused on keeping our team compact, which allowed us to keep the ball moving smoothly. However, after we made changes to our formation, we saw a huge gap between our attackers and showed signs of fatigue in the final 15 minutes of the second half. We hope to prepare ourselves well ahead of our next match, so that we can earn another win.