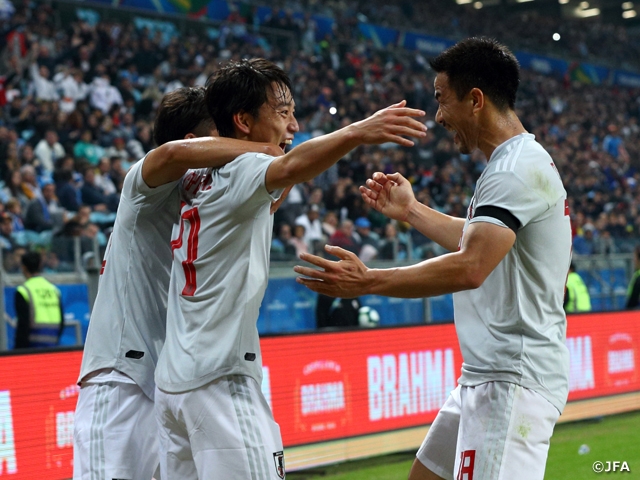 On Thursday 20 June, the SAMURAI BLUE (Japan National Team) played their second group stage match of the CONMEBOL Copa America Brazil 2019 against the Uruguay National Team at Arena do Gremio, Porto Alegre. Japan showed an equally matched bout from the beginning of the match and earned a 2-2 draw against the tournament favourites.

On this day, the team entered the match with a black armband in commemoration of the passing of Mr. KITAYAMA Tomonori, who served for the JFA International Committee and took the role to bridge the gap between South America and Japan for the past 40 years. Following the match, coach MORIYASU Hajime mentioned, “Without Mr. Kitayama, we wouldn’t be participating in this wonderful tournament, and we would like to show are respect and condolences to Mr. Kitayama.” 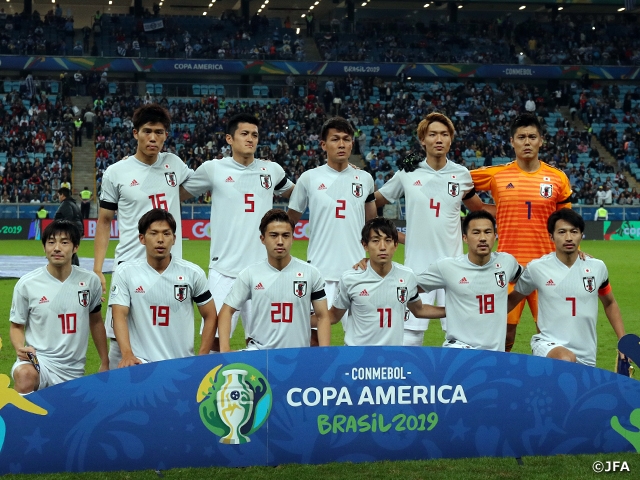 Despite entering the match with just a two-day rest, coach Moriyasu stated, “We took an approach to showcase the strengths of each individual while we maintain a good distance between each other in both offence and defence.”

As Japanese defender Tomiyasu mentioned, “We focused to maintain a high defence line,” Japan applied aggressive pressure against Uruguay and showcased an equally matched bout in the early minutes of the match. In the 25th minute, Miyoshi received a pass from Shibasaki before carrying the ball upfront and striking a shot that captured the net to give Japan the opening goal.

Soon after Japan took the lead, in the 32nd minute, Ueda’s challenge to Edinson CAVANI was reviewed by VAR and was ruled as a penalty kick. Luis SUAREZ calmly converted the spot kick to equalise the match. However, Japan showed great composure after this goal, as the Japanese goalkeeper, Kawashima, later reflected, “Despite featuring many young players, our team looked very dependable from my standpoint.”

In the 59th minute, Nakajima and Sugioka combined with each other to break through the left flank. It was once again, Miyoshi, who converted the opportunity to give Japan the go-ahead goal. Uruguay responded in the 66th minute, when Jose GIMENEZ capitalised on a corner kick to level the match. Following the second equaliser, the match saw an intense battle between the two sides, but neither side managed to score the game winner, as the match ended with a final score of 2-2. 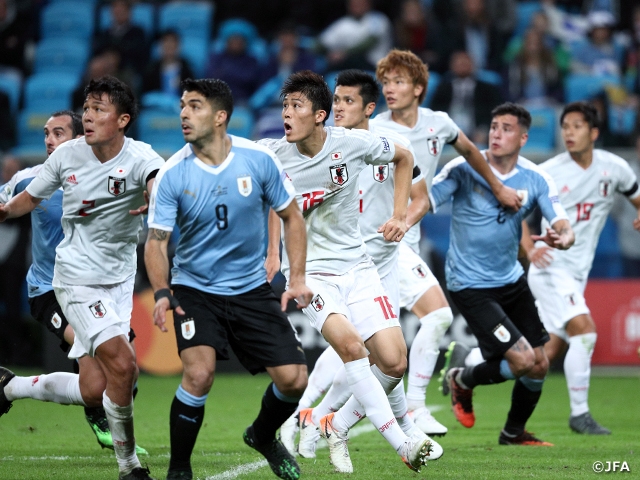 The SAMURAI BLUE will face the Ecuador National Team in their third group stage match on Monday 24 June at 20:00 local time (Tuesday 25 June at 8:00 Japan time).

MORIYASU Hajime, Coach of SAMURAI BLUE (Japan National Team)
Following the match, many of our players looked very disappointed at the locker room. With the team facing one of the best teams in the world in an away match, it was expected that Uruguay was going to take control of the match, but our players showcased a persistent effort to keep the match within our reach. The veteran showed their leadership and the team managed to display a well organised bout. Despite taking the lead twice in the match, it was heart breaking to concede the equaliser in both occasions. However, our players showed their resilience to finish the match with a draw. If we lost our concentration at any given point, we would have gained zero points from this match. The young players showed their will to challenge and the team paid plenty of respect to our opponent. This is just a starting point, as we shall not be satisfied with this result, and we will now have to prepare ourselves ahead of the next match.

DF ＃2 SUGIOKA Daiki (Shonan Bellmare)
We were able to see some improvements in our defence, while this match allowed us to experience the world standard in first-hand. Our opponent kept their attacks simple, as the two forwards showcased a performance at the world level. I personally struggled to connect the ball after we forced a turnover and I lacked the quality to send the ball upfront. A player who gets the call-up to the national team at a regular basis would definitely be able to connect those passes, so I felt the need to improve myself in that aspect.

DF #4 ITAKURA Kou (FC Groningen)
I wasn’t really nervous, but with this being my first match in a while, my perspective was pretty narrow. If I could’ve played with a wider perspective, I would’ve done a better job out there. However, I didn’t loose my spirit to fight back, and that spirt has allowed the team to earn this result.

DF #5 UEDA Naomichi (Cercle Brugge K.S.V.)
I am disappointed that I cost the team a goal. Uruguay showed great movements after receiving the ball and they utilised their body very effectively. There were so many things we need to learn from them. We entered today’s match with the intention to contain the two forwards. With our offensive players applying aggressive pressure from the front line, it made it easier for us to force turnovers and defend against the strong opponent. Despite facing two of the most talented forwards in the world, I spoke with Tomiyasu to play with courage and step up the defence line. The team has shown great improvements through the two matches, but we still have many aspects to improve on, so we hope to make the adjustments ahead of the next match.

DF #19 IWATA Tomoki (Oita Trinita)
With this being my first match with the senior team, I was feeling a bit nervous, but I am pretty satisfied with my overall performance. I entered the match with the intention to apply aggressive pressure, and that approach allowed me to showcase my usual performance. The two strikers of Uruguay showed great speed and power. Even though I was trying to make physical contact against them, they were too fast to catch up with.