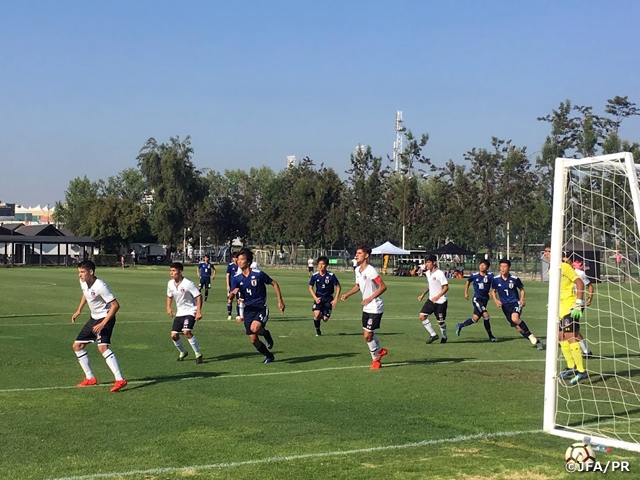 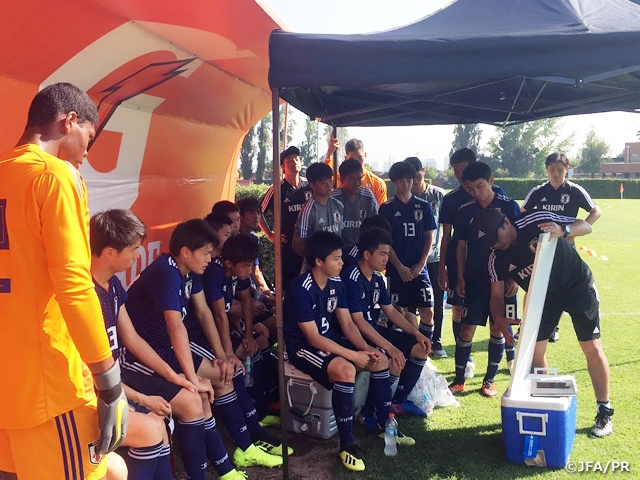 The U-17 Japan National Team, who has started their trainings in Santiago, Chile from Monday 18 February, has played a training match against CSD Colo-Colo on Wednesday 20.

CSD Colo-Colo is a well-known club in Chile, and they are the only Chilean club to win the Copa Libertadores, which is a competition held to determine the top club team in South America. The original plan was to face the U-19 team from the Chilean powerhouse, but prior to the match, a change was made to have the U-17 Japan National Team face the U-17 CSD Colo-Colo, and as a result, the Japanese side captured a 2-1 victory over the Chilean club who has sent out many players to their under category national teams.

It was the Japanese side who showed great aggression and intensity entering the match, as they played with the intention that they cannot afford to lose against players in the same age category. The opening goal came in the eighth minute of the match, as WAKATSUKI Yamato sent a pass towards NAKANO Shinya in the left flank, who delivered a through ball into the space behind the opposing defence line. TSUKUI Takumi responded to this delivery and converted the opportunity with a left footed shot. Despite their eagerness to score more goals, Japan struggled to pick up their pace, as they showed signs that they are still a young team in the process of maturity. The team still managed to capture the second goal in the 37th minute, when the they showed great pass-works to allow TOYAMA Shoji to capitalise the opportunity he was given in front of the goal. However, a turnover forced deep in the Japanese territory led to a goal scored by the local side, sending the match into halftime with a score of 2-1.

During halftime, the Japanese players actively communicated with each other to make the necessary adjustments in the second half. Despite seeing their side struggle to find their rhythm in the early minutes, once their opponents started to show fatigue, Japan started to create more opportunities. In the 79th minute, Wakatsuki responded to a long-feed delivered by SUMI Seiga, before striking a right-footed shot, but his attempt was denied by the crossbar. Although Japan failed to score further goals, the players showed great persistency to keep their lead intact to win the match 2-1.

With this being their first tour since last October’s AFC Championship, many players made their first call-up to the team and this victory in their first match shall give them great confidence moving forward. With momentum on their side, the U-17 Japan National Team will now face the U-17 Paraguay National Team on Friday 22. 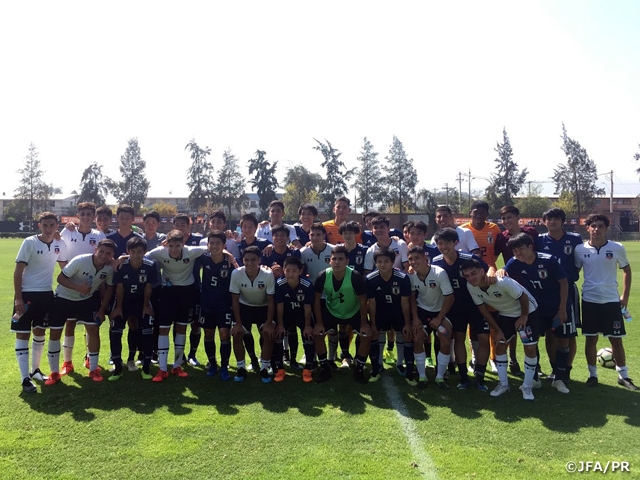 GK #12 SUZUKI Zion (Urawa Reds Youth)
I am very glad to be a part of this year’s first activity for the U-17 Japan National Team. With this being our first match as a team, we entered the match with the intention to keep on trying things without being scared of making mistakes. In that aspect, I am glad that I was able to create opportunities with my feeds. Although we saw rooms for improvements in our build-ups at both the team and individual level, I am glad that we were able to earn the victory today. I also felt like the tasks we saw today can be implemented in our next match, so overall this was a positive match for us. The two matches scheduled ahead of us in this tour are expected to be tough matches, but we will give our very best to stay on the same page as a team and strive to win both matches.

DF #6 HATA Taiga (Ichiritsu Funabashi High School)
We had a loose vibe flowing within our team prior to the match and our coach has pointed out that we were not giving our best to prepare ourselves ahead of the match. That has certainly showed in the first half today, as we couldn’t execute our game plan and weren’t on the same page as a team. However, the players did a great job to talk it out during halftime to make the adjustments in the second half. As a result, we were able to play with unity and win the match. Following tomorrow’s training session, we are scheduled to play two consecutive matches, so we must condition ourselves well and give our very best to showcase a total team effort to win the matches.

MF #17 TANAKA Satoshi (Shonan Bellmare U-18)
I wasn’t able to do anything today. I wasn’t able to position myself in a good angle to help the team pass the ball around with pace. In defence, I was focused on forcing turnovers, but I wasn’t able to win the ball as much and committed too many fouls. I hope to prepare myself so that I can earn better results in our next match.

FW #11 TSUKUI Takumi (Yokohama F・Marinos Youth)
This was our first match as a team, but we entered the match with a loose vibe and failed to prepare ourselves appropriately. We weren’t on the same page on the filed and saw many flaws as a team. That is something we must talk about in our training session and meeting tomorrow. I felt the need to play with more aggression and intensity to contribute for the team, so I will work on that aspect ahead of the upcoming schedule.

About “SPORT FOR TOMORROW”

“SPORT FOR TOMORROW” is an international sport contribution initiative led by the Japanese government, which was announced by Prime Minister ABE Shinzo during the IOC Congress in order to promote the bidding activities for the 2020 Olympics and Paralympics in Tokyo. It is aimed to spread the value of ‘SPORT’ to more than 10 million people across all generations in over 100 nations, especially in developing countries, from the year 2014 leading up to the 2020 Olympics in Tokyo.