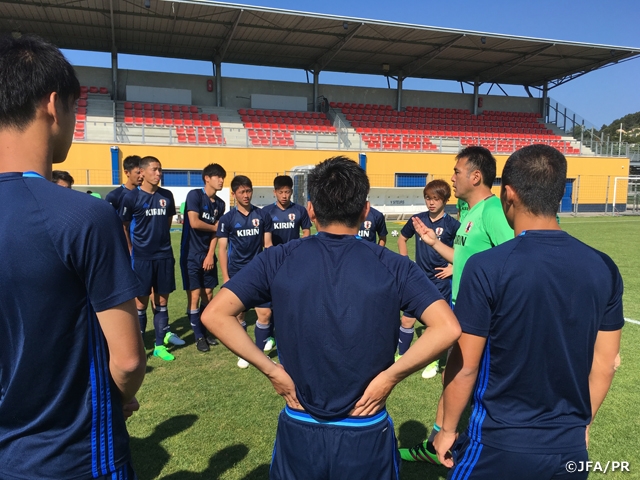 On Tuesday 30, one day after the first match of the group league at the 45th Toulon Tournament 2017 against U-20 Cuba National Team, the U-19 Japan National Team had a workout only in the morning, spending the afternoon individually including watching the video footage of the first match. The training in the morning had the players who played in the first match for more than 40 minutes go through recovery regimen such as jogging and stretching, while the rest of the players who either played less than that or did not play at all worked out more intensively for the next match including one on one drills.

The following day, Wednesday 31, saw another training session in the morning again. For the second contest against Angola, the squad made sure the build-up moves from the defence line and also what each player needs to do according to his position. After engaging in the shooting drill off side crosses, they wrapped up the preparation after one hour. 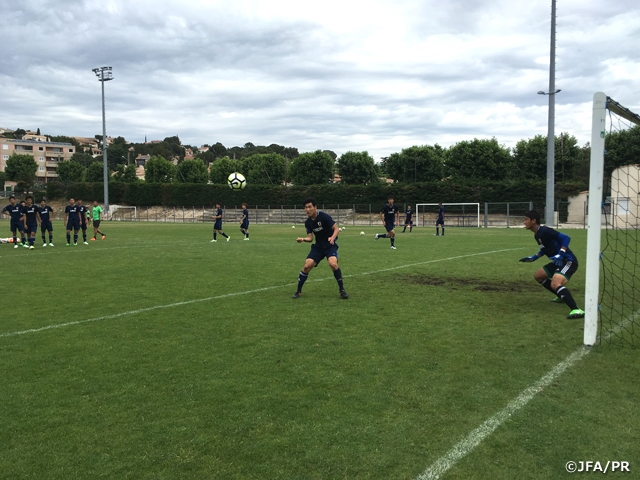 In the afternoon of that day, the team had a meeting where coach AKIBA Tadahiro, who served as a coach for the U-23 Japan National Team in last year’s Rio de Janeiro Olympics as well as played in the Atlanta Olympics himself, spoke about the importance of the life off the pitch including the habit of maintaining an ideal mental state and thinking well before acting.

Right after dinner, the 19th birthday of MIKUNI Stevia Egbus was celebrated by the entire team to improve the mood among the team even better. 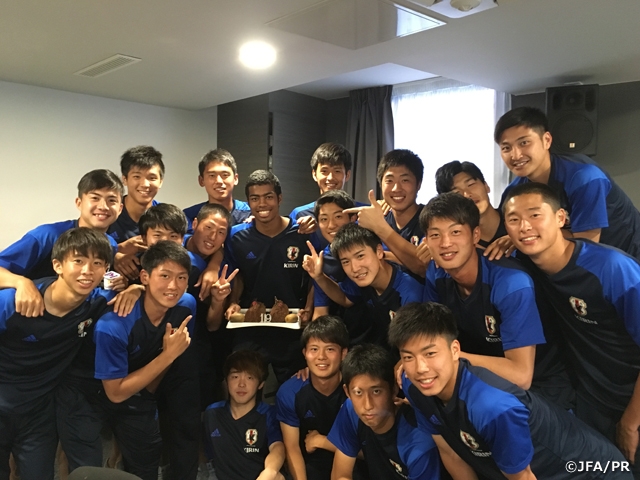 DF #20 MIKUNI Stevia Egbus (Juntendo University)
I got selected to the national team for the first time and it’s one of my goals come true. I am very happy. Now that I am here, I have wanted to play as much as what I can do on the pitch. But looking back the first match against Cuba, I am frustrated that I couldn’t play how I wanted to. From the next match, I want to stay confident and keep playing my style of plays. I play for my university team, but on this team there are guys who are as old as I am and already playing professionally. I want to learn from them as well during this run and take advantage of it for my growth. I was very happy also because all of my teammates celebrated my birthday today.

MF #7 HARIGAYA Takeaki (Jubilo Iwata)
This tour is the first international tour I experience as a Japanese international. It’s also the first time to play for coach KAGEYAMA (Masanaga), so I think it’s important for me to get used to this team’s plays and the surroundings. The first match gave us a homework which is the fact that we couldn’t finish plays with goals. In the next match against Angola and the third one against England, I think we will have less scoring opportunities. So we will make sure to take advantage of the limited chances, win both of them and advance to the semi-final in the knockout round.

FW #18 ANDO Mizuki (High school attached to Nagasaki Institute of Applied Science)
I am happy to get to play in a big tournament like the Toulon Tournament. I want to help my team win the tournament with my best plays possible. In the first match against Cuba, I got on the pitch in the middle of the match. We couldn’t convert the chances we had and that reminded me that the match is very difficult when our offence doesn’t score goals. The Angola team are physically gifted and it will be a tough match again, but I want to keep moving on the pitch as much as I can to grab a win.