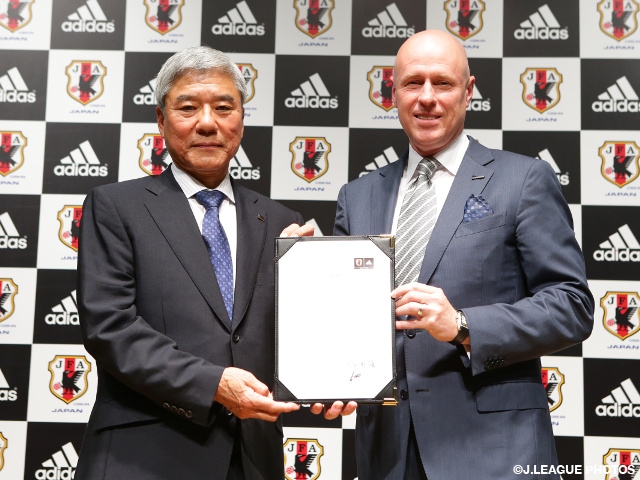 Football is one of the most popular sports in the world. The achievements of SAMURAI BLUE and Nadeshiko Japan, as well as other national teams in each category, inspire boys and girls and make us proud.

We can contribute to achieving adidas Japan K.K’s vision: "OUR PASSION FOR SPORT MAKES THE WORLD A BETTER PLACE”, when Japan national teams play well internationally and get excellent results. So we’ll continue to do our best to develop players and coaches.
I believe we will develop Japanese football even more with the rock-solid support of Japan K.K.

As the President of adidas Japan K.K., I am very pleased that we forged a partnership with the Japan Football Association, which will mark another step forward for Japanese football.
Our partnership with JFA has been continuing for a long term and it’s very special for us. Is started in the 1960s and we became their official supplier in 1999.
Since then, we have shared many achievements and look forward to many more, including the World Cup. adidas Japan K.K is approved by FIFA and helps football associations, clubs and players in various countries as a football leader.
We also focus our support on women’s football internationally and we are proud of supporting Japan, who is one of the strongest teams in Asia.