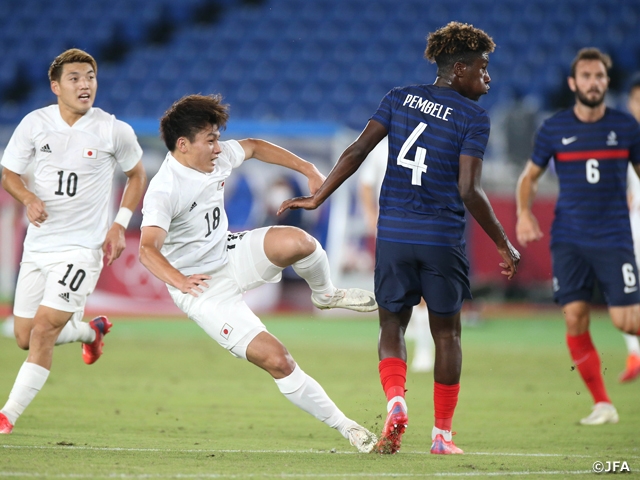 On Wednesday 28 July, the third group stage fixtures of the Games of the XXXII Olympiad (Tokyo 2020) men's football tournament took place at various locations nationwide. At International Stadium Yokohama, the U-24 Japan National Team faced the U-24 France National Team.

Despite winning back to back matches in Group A, Japan have not clinched the knockout stage yet. “We reminded each other that we have not won anything yet” said DOAN Ritsu (PSV Eindhoven), as the team entered their third group stage match.

TOMIYASU Takehiro (Bologna FC 1909) made his return to the line-up after suffering an injury during a pre-tournament training session. As the defender mentioned, “I was watching the past two matches as if I was playing on the pitch,” Tomiyasu showcased a solid performance that brought stability to the team’s defence. UEDA Ayase (Kashima Antlers), who also suffered a setback with an injury, made his first start in the Olympics. 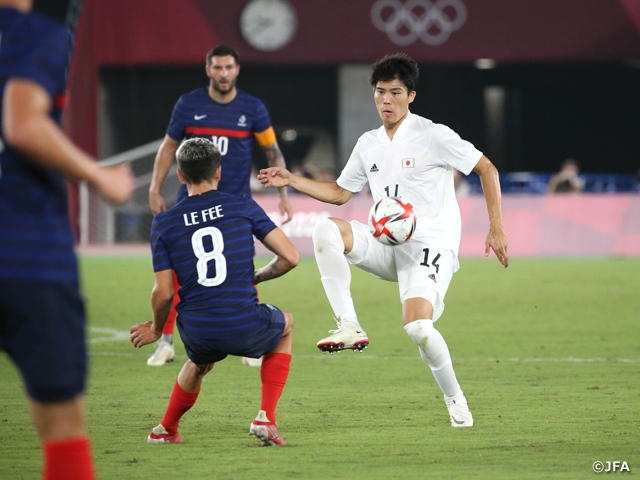 Japan was in position to clinch the knockout stage even with a loss with a goal margin, but showcased their willingness to win the match, as Tomiyasu mentioned, “Regardless of the situation, we entered the match just as another match we needed to win.” The centre back who also plays for the senior squad shared his take on the team’s performance, “Our opponent didn’t come out pressing against us, so we didn’t have to rush our plays. We kept moving the ball while anticipating for our chances to exploit the open space, and that approach turned out to be very effective.”

The opening goal came in the 27th minute, when KUBO Takefusa (Real Madrid) responded to a deflection caused by the shot of Ueda to score a goal in three consecutive matches, as the ace later commented, “I am just fortunate to be in those positions to score the goals. The team is currently in great form.” 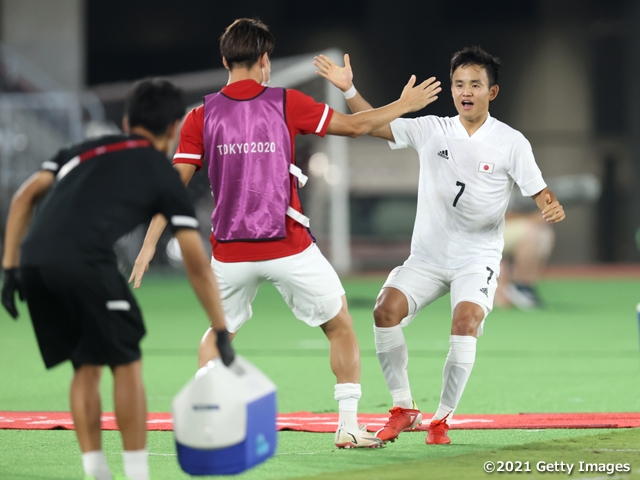 The second goal was once again created by Ueda, who later mentioned, “I am always trying to strike my shots towards the far side to create deflections for the team.” The shot taken by the striker in the 34th minute was blocked by the goalkeeper, allowing SAKAI Hiroki (Urawa Red Diamonds) to convert the deflection to make it 2-0 before halftime. In the 70th minute, MIYOSHI Koji (Royal Antwerp FC), who entered the match as a second half substitute, curled a left footed shot from the edge of the box to make it 3-0, followed by a goal scored by MAEDA Daizen (Yokohama F.Marinos) during additional time to cap off the match. With the team booking a 4-0 win over France, Doan shared his take, “The fact that the substituted players scored goals means a lot for the team. This was a great match for us.” 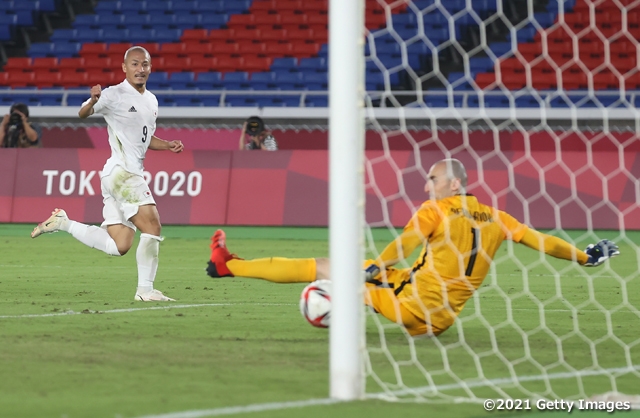 Following the match, coach MORIYASU Hajime praised his players, “They did not play passively, but rather fought with great courage and aggression.” However, the coach also mentioned, “I am proud of this result, but this win does not guarantee us a win at the quarterfinals.”

With this victory, Japan have secured the top spot of Group A and will be facing the runners-up of Group B, New Zealand, on Saturday 31 July (18:00) at Ibaraki Kashima Stadium. 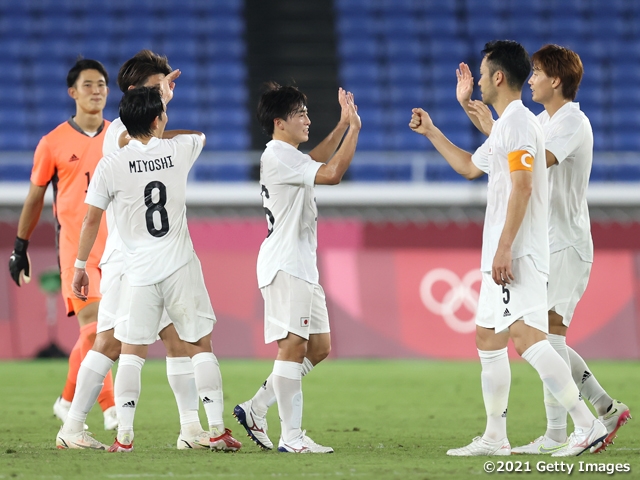 MORIYASU Hajime, Coach of U-24 Japan National Team
With players like Tomiyasu and Ueda returning to the starting line-up and showing strong performances, it gives us more depth to the team moving forward. Including the alternate players, all 22 players have proven that they can contribute to the team, which allows us to showcase a steady performance regardless of who is on the pitch.

DF #2 SAKAI Hiroki (Urawa Red Diamonds)
We didn’t expect this kind of result heading into the tournament, but these three wins prove that we worked and fought hard as a team, and I am very satisfied with this result. As soon as Ueda took the shot, I knew the goalkeeper was going to parry the ball, so I made my run into the box. The deflection came right towards me, so I am glad I was able to keep my cool to convert the opportunity.

DF #14 TOMIYASU Takehiro (Bologna FC 1909/Italy)
I was in great form heading into the tournament, so I was devastated when I suffered the injury. I was hesitant to make some plays at first, but I didn’t have any issues later on. (When asked about facing the French striker Andre-Pierre GIGNAC) I was able to play with confidence. I am used to playing against world class strikers, so I was able to showcase my usual performance. I focused on slowing down the pace of the match and the game management aspect during the second half.

DF #15 HASHIOKA Daiki (Sint-Truidense V.V./Belgium)
I entered the match with the intention to play aggressively, and after executing my first play, I was able to find my groove. The opponent’s #10 kept making runs in the spaces in front of and behind Yoshida, so I focused on providing coverage for Yoshida, while also anticipating on the balls to the flank, which I feel like I was able to execute very well. I am always prepared to play at any given time, and I will continue to make myself available for our next match.

MF #8 MIYOSHI Koji (Royal Antwerp FC/Belgium)
When I entered the match in the second half, I was thinking that the third goal will be the key to this match, so I am glad I was able to score that goal for the team. I am always striving to earn results that would help the team, so I am happy to showcase that on the pitch. In terms of game management, I knew what I had to do, and the team was able to implement what we learned from our previous matches and stay on the same page.