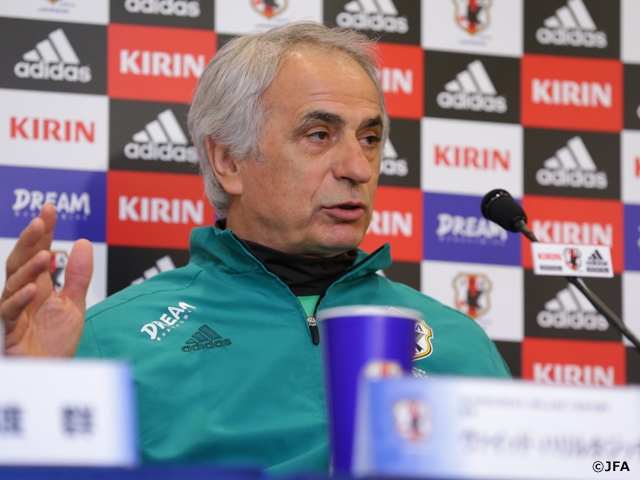 SAMURAI BLUE (Japan National Team) coach Vahid HALILHODZIC expects his players to show their emotional but composed performance. "Tomorrow is our final. We will finish with a beautiful win," says Halilhodzic on Monday 28 March at the match-day site Saitama Stadium 2002 in the run-up to their final second round match against Syria in 2018 FIFA World Cup Russia Asian Qualifiers Round 2.

Japan, who have already sealed a spot for the final qualifying round, are leading Group E with 19 points, followed by Syria by one point. Japan can get through the second round atop with a win or a draw in the following match. Considering the match result affects the seeding at the draw for the final qualifying round, Japan may want to finish the second round with a victory to gain a better condition.

Halilhodzic is wary of Syria's goal-scoring ability and moves that attempt to break the rhythm of Japan. "It's a two-horse contest of the group. It's not an easy match," he says. While Japan scored 20 goals in the past seven matches, Syria tallied group-leading 26 goals. The Japan boss warns his players. "Do not be drawn into an elaborate trap by their tactics."

The Japan team went through their own tactics in one-hour tune-up session at the stadium.

Halilhodzic also talked about the closed-door intra-squad game that took place on Sunday 27. "They showed high-level performance. It was so good that I could have kept watching much longer." He implies he is satisfied with the preparation so far.

To advance to the final round, a team needs to claim the top place among all eight teams or become a top four second-placed team. Syria have an advantage on points and goal difference, being in a situation where a draw is enough to meet those criteria. Syria coach FAJER EBRAHIM commented with confidence, "we expect to get through 95 percent of the time. We also have motivation to make our fellow countrymen happy. It's going to be an exciting match."

Their most recent matchup last October saw both teams remain scoreless in the first half before Japan edged ahead in the second half with goals from HONDA Keisuke, OKAZAKI Shinji and USAMI Takashi for a 3-0 victory.

Defender YOSHIDA Maya (Southampton FC/England) says, "we want to create more openings to break through when the opponents play very defensively. The final qualifying round is going to be at a higher level. There are only two years left for the World Cup. We've got to aim higher.

Midfielder HASEBE Makoto (Eintracht Frankfurt/Germany) shows his enthusiasm, "the key is how well we can create the game with a tense feeling. We want to go for it with mindset as if the match result would decide the World Cup berth." 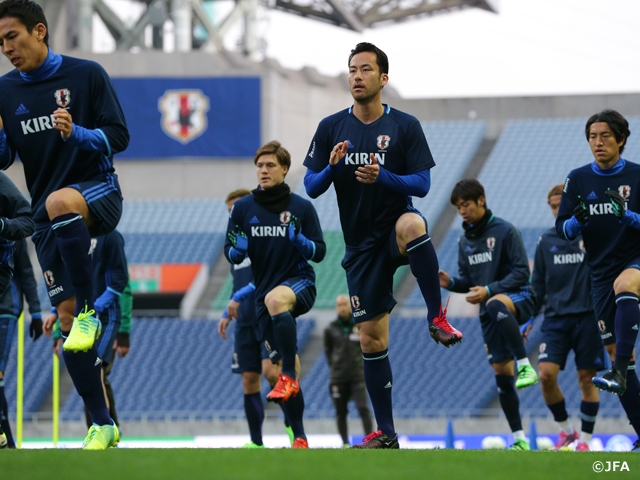 Vahid HALILHODZIC, Coach of SAMURAI BLUE (Japan National Team)
Tomorrow, it's going to be a two-horse contest of the group in the final match of the second qualifying round. It's the final for us and we've got to win it. There is no doubt about Syria's goal scoring ability. They are realists and going to do something against Japan. It's not going to be easy. Not falling into their trap that breaks our rhythm, we need to control ourselves not to let their traps frustrate ourselves. But the players have worked neat, intensive training. If they can show that kind of stuff, I can be optimistic.

MF  HASEBE Makoto (Eintracht Frankfurt)
Tomorrow, the key is how well we can create the game with a sense of urgency, after we've already got through the round. Syria are in a situation where a draw is enough, so we can expect they will try to use time or sit back in their end. But we want to dominate the match even in such a situation. Because opponents in any match are usually concentrated until the first goal comes, you may think we are struggling, but we don't have to be rattled. There is nothing better than we score early, but experiencing the stretches where we can't score early in the first half is also important for our growth.

GK  NISHIKAWA Shusaku (Urawa Reds)
I think we can give credit to ourselves for the fact we've come this far with clean sheets, and as a goalkeeper, to keep doing that is what I really care about. And that's more like motivation than pressure. I think we get going offensively, so if I take care of space behind the team, we can eliminate opponents' chances.

FW  HAVENAAR Mike (ADO Den Haag)
I want to contribute to the team. By contributing to the team, I can also take advantage of it for my own next chance. Going to the Netherlands has allowed me to get exposure again, so my determination to be on the national team got even stronger. And I've got tangible results. I'm desperate to get at least one goal tomorrow.

DF  YOSHIDA Maya (Southampton FC)
I think keeping them from scoring is the mandatory for us in this second round. The opponents took a long trip and we can play two matches at home. That's an advantage and we need to prove the difference. We have a lot to do with our elaborate tactics. Whatever your opponents do, it's important to achieve that first and also execute what our coach expects.

FAJER EBRAHIM, Coach (Syria National Team)
We all know Syria are in a tough situation and want to make our fellow countrymen happy through football. That's the motivation for us. I know Japan are strong, but we are ready for it. What's important is discipline and order. Pressing on each other is going to be the key component of the match. It's going to be an exciting match tomorrow. 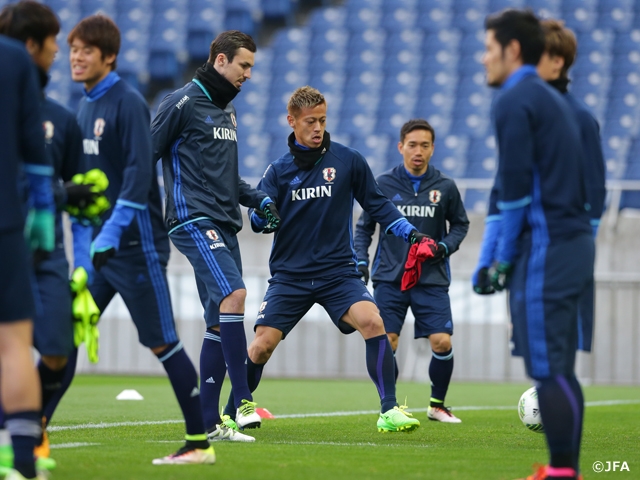