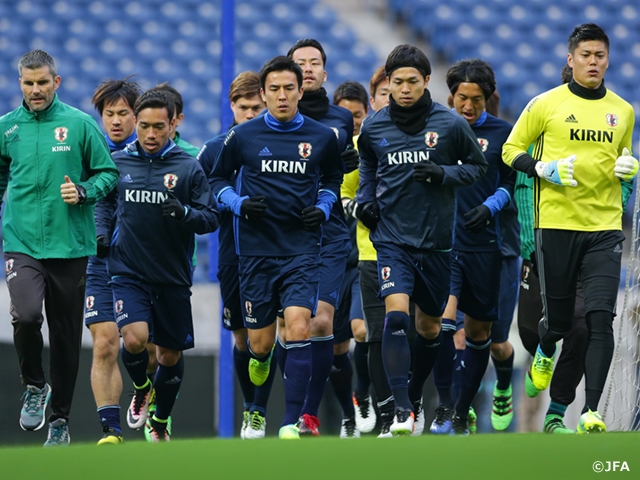 SAMURAI BLUE (Japan National Team) had prep training on Sunday 27 March at the match-day site Saitama Stadium 2002 in the run-up to their final match against Syria in 2018 FIFA World Cup Asian Qualifiers Round 2 .

Japan stand in the top of Group E with 19 points, being one point clear of second-placed Syria. Having secured a spot in the final qualifying round, Japan will get through the second round atop with a win or a draw.

In the last matchup held in Oman due to the domestic instability in Syria last October, Japan finished the first half 0-0 and opened the scoring with forward HONDA Keisuke (AC Milan)'s penalty in the 55th minute. And forwards OKAZAKI Shinji (Leicester City Football Club) and USAMI Takashi (Gamba Osaka) added goals in the 70th and 88th minutes respectively, helping their side grab a 3-0 victory. As a result, Japan moved up to take the group's top spot away from Syria and have remained there ever since.

The training on Sunday 27 started with a 15-minute warm-up session opened to media, and then the players engaged in an intra-squad scrimmage with doors closed to go through their tactics.

The team have kept in form as they handed a 5-0 loss to Afghanistan on Thursday 24 in their seventh match of the Round 2, dominating the opponents while trying out a new formation.

MORISHIGE Masato (F.C. Tokyo), who started the match, says, "in the following Syria match, we need to show what we did in the last match at a higher level and with more accuracy."

"We've gone through training well," says KAGAWA Shinji (Borussia Dortmund). "We've got to get through to final round on top. It's our home and that even makes us feel like getting good results. And we will play for a win."

Japan's match against Afghanistan will kick off at Saitama Stadium 2002 at 19:30 on Tuesday 29. 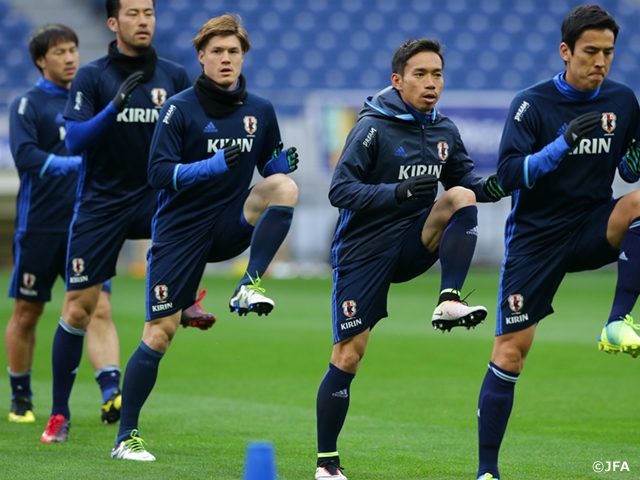 FW  USAMI Takashi (Gamba Osaka)
We want to play the final qualifying round in the best circumstance, so of course it’s important to get out of this round as first place. We talk with each other about keeping the winning streak. The last matchup was in a harsh environment and we had a hard time in the first half, but we were able to show a difference in teams' level and the match ended with a 3-0 win. This time, we can play in a better condition and I think we will win with our favourable score if we can enjoy and play the game just as we do. Like my way of playing on offence or playing my way to get results, I want to play with a personal ego in a positive sense. But first, it's very important to help the players playing near me like Kagawa and Okazaki play comfortably. By doing that, I think they can take advantage of me next.

MF  KAGAWA Shinji (Borussia Dortmund)
When it comes to the second half, we may be able to do what we want because the opponents' tempo and pace go down, but the point is the first half. The important thing is how we can play as a team in the first half. Like how to play against the opponents sitting back, we need to improve quality of play. In the Syria match, side attacking will be one of the keys. As a passer, I will be aware of the quality of it. Kiyotake's performance was great in the last match and he actually got results. That motivates me. I also want to prove myself with good results.

DF  MORISHIGE Masato (F.C. Tokyo)
We may have long stretches keeping the ball in the Syria match. But I think the opponents will come more aggressively compared to the last match and we may end up allowing more counterattacks. We will communicate well to keep them from scoring. I will feel the best as a defender when we win with a clean sheet and we've kept it so far. We will go out for it again.

MF  HARAGUCHI Genki (Hertha BSC Berlin)
The first thing is to play in the match, so I want to play no matter what the position is if I can get a chance. I will do what is expected and I also have something I want to do. I hope I can show it whatever the position is. To go beyond the older players and former players of the national team, I need a goal or any kind of good results. And unless we repeat in every match, we can't catch up with them. I've got to stick to that more. 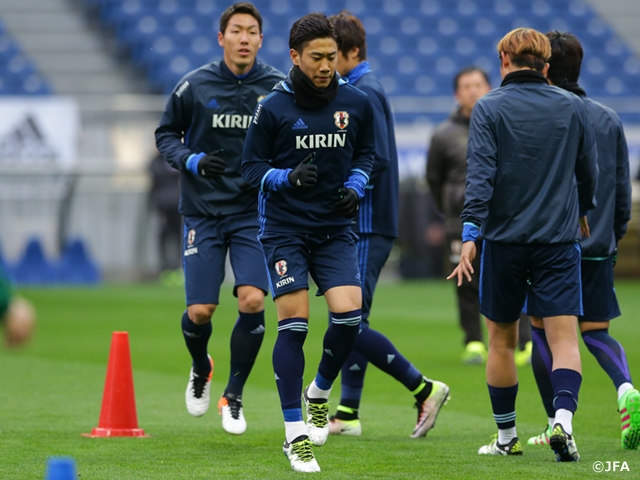