Nadeshiko Japan was defeated by the Netherlands 1-3 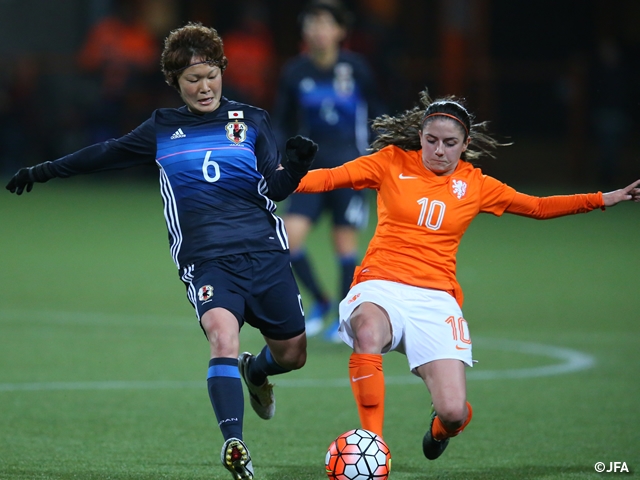 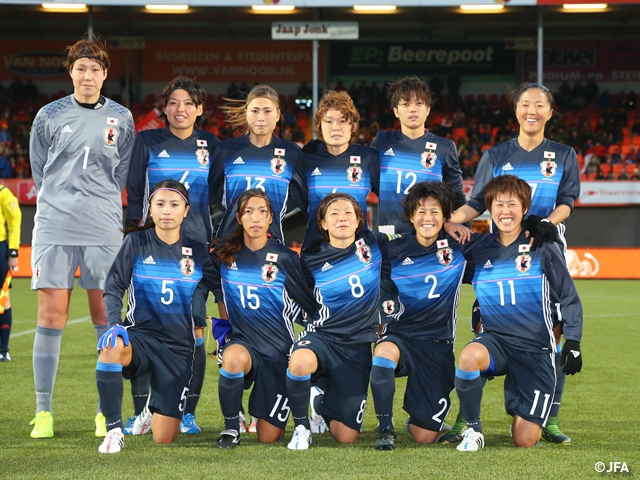 The match against the Netherlands Women’s National Team was a part of the Nadeshiko Japan’s training programme for the final qualifier for the Olympic Games. While there were 5,912 in the crowd at the stadium, Nadeshiko Japan (Japan Women’s National Team) kicked off the match with goalkeeper YAMANE, ARIYOSHI, OSAFUNE, KUMAGAI, SAMESHIMA in defence (from right wing), SAKAGUCHI, UTSUGI in central midfield, NAKAJIMA for right winger, MIYAMA for left winger, OGIMI and ARIMACHI in attack.

In the 4th minute, the Netherlands stole the ball due to Japan’s passing mistake, passed it through Japan’s defence and they applied the finishing touch.  Japan conceded the opening goal. Under the strong pressure from the wing, in the 14th minute, Arimachi dropped the ball to Miyama and she moved it to the front. Ogimi responded to this and took a shot. In the 17th minute, Ogimi picked up a loose ball from a set play and hit it to the goal but it went slightly to the left of the post.

While they couldn’t make any decisive shots, in the 22nd minute, the Netherlands stole the ball after Japan’s mistake in the defence line and they carried on to attack Japan’s goal and successfully scored. Japan kept counter-attacking the Netherlands’ goal by controlling the ball, but the 1st half ended 0-2.

In the 2nd half, the Japan’s Coach SASAKI substituted 2 players: MASUYA for right-winger and SUGASAWA for forward. In the 49th minute, the long ball reached the front line and Sakaguchi made a central shot which successfully found the net.

As Sasaki had told before the match, "we want to try various approaches judging the flows of the game", in the 62nd minute, Sugita took the role of right-winger and Kawamura moved to play in a defensive midfielder role, and in the 75th minute, Yokota joined on to the pitch. Japan wanted to get the rhythm of the match but they fouled an opponent player in the penalty area and gave them a penalty. The Netherlands got that chance to score their 3rd goal and the match ended. Japan ended the last match of this year with 1-3 defeat. 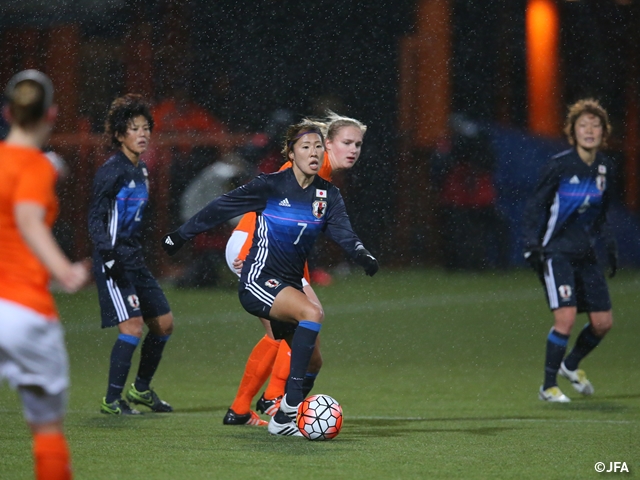 SASAKI Norio, Coach
There were things that the players did well such as ball possession and defence combination, but we should have scored our chances. The Netherlands robustly took advantage of the stolen ball from our critical mistakes and put the ball in to our net. In the final qualifier of the Olympic Games, we should never make these types of mistakes and we have to be consistent and stable throughout the matches.

As the Netherlands made good use of counter attacks after periods of consistent defence, we do have chances to lose the important matches against Asian teams by losing the ball and getting counter attacked We have learned from this match against the Netherlands. In terms of player selection, I could check both advantages and disadvantages of each of the players in this opportunity hence it was a good camp for the future.

MF #8  MIYAMA Aya (Okayama Yunogo Belle)
It was a game that showed our incompleteness as a team. Since we had a lot of scoring chances, the result could have been different if we could have taken so of them, regardless of the goals we conceded. However, even in that situation, I can say that we kept good attention to details during the match, not just having a game.

MF #13  UTSUGI Rumi (Montpellier HSC/France)
While we have new or younger players in the team, what was the key apart from making a good result in this match was how much each player could play well, and making a good match. When you play against foreign teams, a thing that you don’t really regard as a mistake can give opponents a chance to score. We have to play against taller players and we also have to play in any difficult condition including bad weather. This time, we could see what we can and cannot do clearly, and I appreciate this lesson positively as a team.

DF #4  KUMAGAI Saki (Olympique Lyonnais/France)
As a defence player, I know that it is difficult to win after conceding 3 more goals and I have to stick to make a good result. There were the chances that we could not score and this is our issue; as a team I want to improve this. Whichever players will be selected, our current goal is to qualify for the next Olympic Games. There are many things to do. This camp was a precious opportunity for me to communicate and play with the new players of the team.

FW #19  MASUYA Rika (INAC Kobe)
There were things that I could do well, but I still made many mistakes. While it was different from how I play with my teammates of my local team, at times I waited for the others too much. I wanted to be more aggressive.