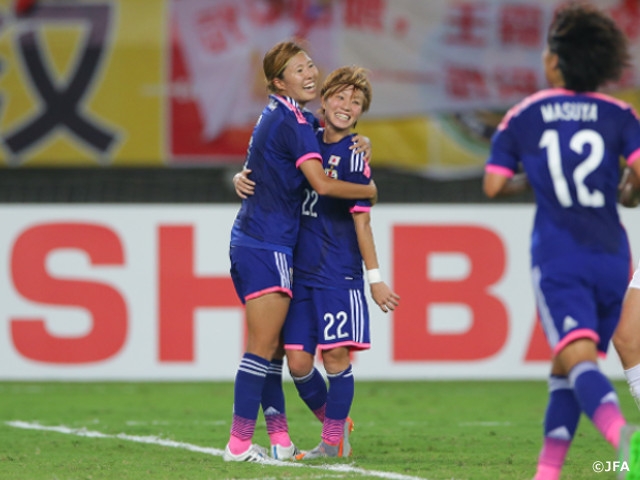 On 8 August, Nadeshiko Japan recorded the first victory at the EAFF Women’s East Asian Cup in Wuhan, China when they defeated China PR 2-0, and finished the tournament at third place overall.

In the 88th minute subbed-in forward YOKOYAMA Kumi (AC Nagano Parceiro Ladies) broke the deadlock, and in the third minutes into the additional time, midfielder SUGITA Ami (Iga FC Kunoichi) extended the lead with her second goal of the tournament.

Both countries came out for the match with two losses in the past two matches. Japan, trailing China PR on goal difference, needed to win the match to move up to third place.

Three players were replaced on the starting line up from the last match, as defender TAKARA Ryoko and midfielder KAWAMURA Yuri (both from Vegalta Sendai Ladies) manned the left full-back and defensive midfielder positions respectively. Forward TAKASE Megumi (INAC Kobe Leonessa) was also inserted into the line-up at one of the forwards up front.

With three days interval after the previous match enabled Japanese players to move more actively than the last two matches. Just after the kick-off, they started putting intense pressure on the opponents’ ball and noticeably displaying aggressiveness. 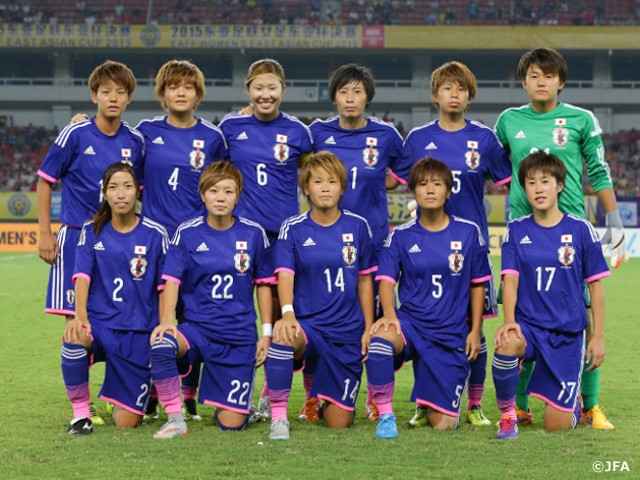 As for China, on the other hand, even a draw would keep them at third place. They employed 4-4-2 system and played defensively. Once intercepting passes, they intended to feed two strikers up front, WANG Shanshan and WANG Shuang, quickly without many touches.

The first scoring opportunity for Japan came in the 26th minute. Forward TANAKA Mina (Nippon TV Beleza) after receiving a pass from Takase was awarded a free-kick after a physical battle with an opponent. Sugita directly aimed at the goal only to find it deflected by the goalkeeper and hit the post.

After passing the 30-minute mark, Japan repeatedly lost their ball in the midfield and allowed China PR to attack with short counter-attacks. Japan’s defence including the goalkeeper, however, defended well physically.

In the second half, coach SASAKI Norio sent forward SUGASAWA Yuika (JEF United Ichihara Chiba Ladies) onto the pitch in place of Takase. The other moves to switch midfielder NAKAJIMA Emi, who was playing outstandingly on the right flank, down to defensive midfielder and put Sugita back to left midfielder resulted in better ball movement in the midfield.

In the 53rd minute, Nakajima and Sugita fired one shot after another, and also in the 60th, Kyokawa running up to join the attack struck her own with her right foot. One minute later Kawamura’s heading attempt off a right cross only hit the post.

Midfielder MASUYA Rika (INAC Kobe) was subbed in in the 66th minute followed by Yokoyama in the 83rd. Then a minute later, KYOKAWA Mai (INAC Kobe) took the ball up from the right full-back position and sent it to Yokoyama, whose shot was denied and the rebound was picked up by Sugasawa. She threatened the China’s goal with her shot, too.

In the 88th minute, the scoring finally saw the first action when Yokoyama received a pass from Nakajima and penetrated into the box to right-foot it for the opener. Then in the second half’s additional time had Sugasawa dribbled up to feed Sugita, who composedly shot it unguardedy to the right corner of the net to seal the match. 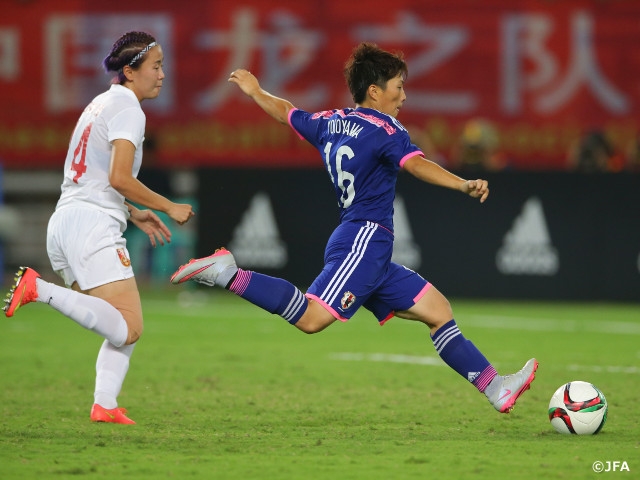 SASAKI Norio, Coach (Nadeshiko Japan/Japan Women's National Team)
My players didn’t give it up to the end and showed their will to win, and that resulted in us taking the ball to the goal in the end. During the halftime, I said to my players “A draw means we finish at the bottom.” Our not-so-experienced players did very well with the Nadeshiko Japan’s team concept. It is now important how each player takes advantage of this experience for their future.

My players improved in a match after match. So I want them to make that improvements in Nadeshiko League matches, too. I think that each country will study this tournament for the Olympics Qualifiers, and Japan also want to make good preparations and win the spot in the Olympics at any cost as the host country of the Asia’s final qualifiers.

GK #21   YAMASHITA Ayaka (Nippon TV Beleza)
My kicking accuracy and decision making wasn’t good enough I think. But I came out to be careful of the opponents’ cross balls, and later in the match I did make good challenges on that. Our backline had almost the same players as the last match, so that made it easier for me to do my job.

I am not satisfied only with the fact that I got playing time. Not to allow goals like the two we actually allowed in the Korea Republic match, I want to make more improvements including the quality of my coaching.

MF #22   SUGITA Ami (Iga FC Kunoichi)
We still have many things to correct such as distances between ourselves in general, but us being able to hold them with no goal and charge hard on the ball show we made enough adjustments on those points. My goal was all thanks to Sugasawa working hard in the play, but I want to take the fact I could score in that situation positively to be confident in myself.

FW ＃9   SUGASAWA Yuika (JEF United Ichihara Chiba Ladies)
Speaking of the second goal scored, I thought I was going to go for it, but I saw Kawamura and Sugita were coming and Sugita had a better angle. So I gave it to her. I think I could turn forward with the ball.

We decided that we would win this match as a team, and we could make it happen. So that gives us confidence. We also found things that we need to improve. So as we correct that, we also want to do well with our own club, too.

MF #13   KYOKAWA Mai (INAC Kobe)
Coach Sasaki mentioned the importance of the plays we execute at crucial moments in matches. Our collectiveness and concentration wasn’t enough in small details such as set-pieces and the foul we gave at the end.

We want to keep taking care of those things, too. I have some regret that I couldn’t play my natural position of left midfielder, but I don’t mean I don’t like defence and I also like making assists. So I feel the full-back position is also worth trying.

MF #16   YOKOYAMA Kumi (AC Nagano Parceiro Ladies)
The second goal we allowed in the Korea Republic match was from my mistake. Our coach told me to “go out and make up for it”. I thought it was the last chance I had for it, so I am glad that it turned out to be this way. I had a good pass from Nakajima at a good timing, so all I had to do was put it in.

I will keep trying hard to score again. I didn’t get to start all three matches, so I think that means there are still more physical ability and knowledge for me to acquire.

HAO Wei, Coach (China National Women’s Team)
My players did their best in this tournament. I am satisfied with their play and I am thankful. We lost all three matches, and without good training we can’t leave a good result. There were our weaknesses in physical ability and tactics, and our young players were affected by the lack of experience.