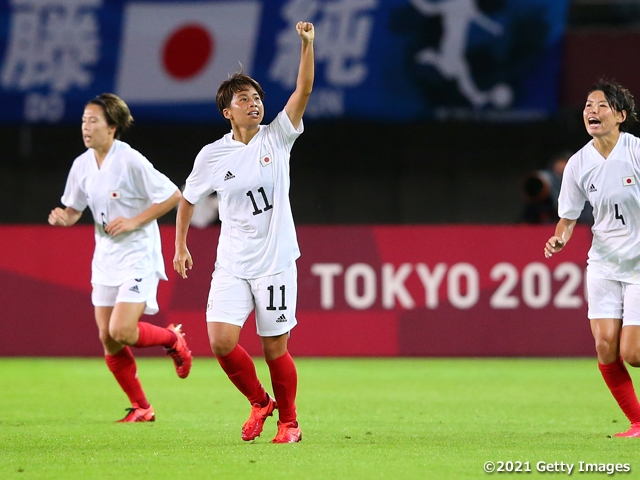 On Tuesday 27 July, the Nadeshiko Japan (Japan Women’s National Team) played their third group stage match of the Games of the XXXII Olympiad (Tokyo 2020) against the Chile Women’s National Team. With their backs against the wall, Japan earned a 1-0 victory thanks to the goal of TANAKA Mina (INAC Kobe Leonessa), earning their ticket to the knockouts stage in front of their fans at Miyagi Stadium.

Following their match against Great Britain, Japan rotated five players from their starting line-up, as centre back TAKARADA Saori (Washington Spirit) earned her first start at the Olympics. Depending on the outcomes of the other fixtures, the team was in position to clinch the knockout stage with a draw, but they were determined to advance through with a win, as team captain KUMAGAI Saki (FC Bayern Munich) mentioned, “We wanted to determine our own fate.”

With IWABUCHI Mana (Arsenal) striking the first shot of the match in the second minute, SUGASAWA Yuika (Mitsubishi Heavy Industries Urawa Reds Ladies), SUGITA Hina (INAC Kobe Leonessa), and HASEGAWA Yui (AC Milan) made collective efforts to create numbers of opportunities upfront. SHIMIZU Risa (Nippon TV Tokyo Verdy Beleza) added layers to the offence, as she made effective runs down the line, creating a close opportunity in the 10th minute. Sugita responded to a through ball of Iwabuchi in the 17th minute, but her shot was saved by the opposing goalkeeper Christiane ENDLER.

Chile also entered the match needing a win to clinch the knockout stage, as they started a similar line-up from their first two matches. Despite the tight match scheduled, the Chilean players showcased a tenacious effort to defend against Japan, as shown in the play made by Francisca LARA in the 21st minute, as the midfielder threw her body out to block the shot of Iwabuchi. Japan took control of the ball possession and struck over 10 shots in the first half, but fell short from scoring a goal, as the match entered halftime scoreless. 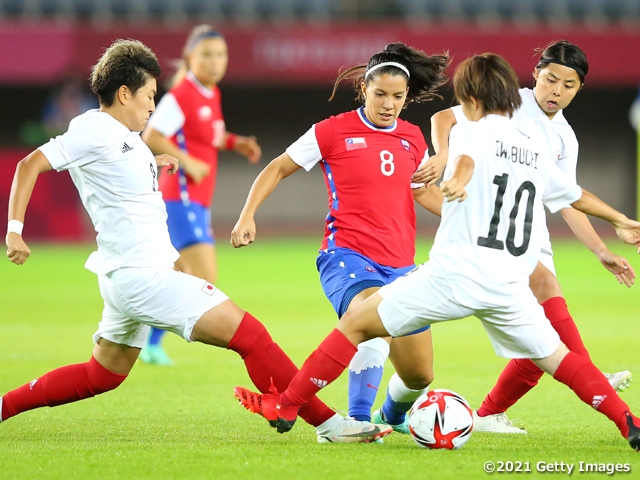 In efforts to break the deadlock, Japan brought in Tanaka to start the second half, as the striker showcased great aggression to apply pressure from the frontline. With ENDO Jun (Nippon TV Tokyo Verdy Beleza) being introduced in the 54th minute, the two attackers combined upfront to create opportunities for Japan but couldn’t find ways to find the net. KINOSHITA Momoka (Nippon TV Tokyo Verdy Beleza) was also added in the 65th minute to vitalise the midfield. However, it was Chile who created the next big chance, as the header struck by Lara in the 69th minute deflected off the crossbar and bounced straight down on the goal line, coming within inches to score the opener.

After evading a major threat created by Chile, the golden moment arrived for Japan in the 77th minute. The play came when Sugita found Iwabuchi inside the box, who delivered the final pass to setup the goal of Tanaka, as the striker later reflected, “I was able to stay calm and see which way the goalkeeper was moving.” With momentum on their side, Japan showcased a strong performance to shutout the Chilean offence and earned a 1-0 victory. 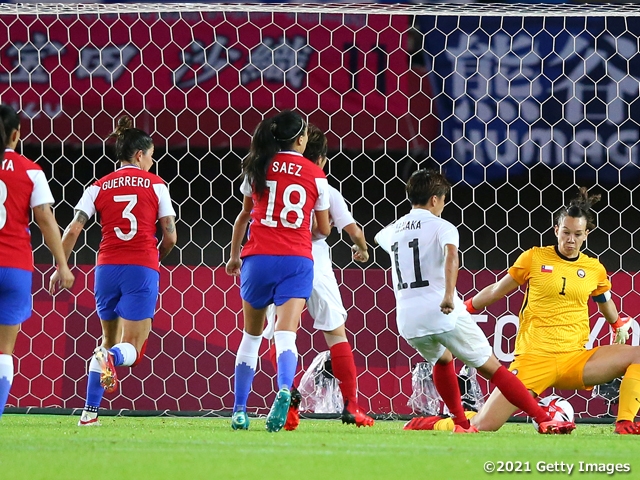 With the Olympics being held at their home country, Iwabuchi commented, “I have never felt so much pressure before.” But after seeing her side surviving through the intense battles of the group stage, the Japanese ace mentioned, “We are looking forward to take on the challenge against the world powerhouses.”

The Nadeshiko Japan will now face Sweden, who defeated USA 3-0 to claim the lead in Group G, at the quarterfinals on Friday 30 July (19:00) at Saitama Stadium.

TAKAKURA Asako, Coach of Nadeshiko Japan (Japan Women’s National Team)
We entered the match knowing that we were in a must win situation. Although we were able to shape up some good offense in the early minutes, the opposing players showcased a tenacious effort to deny us from scoring a goal. Despite the struggles, our players managed to keep their composure and played with great patience to earn this victory. Now we will face Sweden at the knockout stage, one of the hottest teams of this tournament. We will keep the players on the same page and try to make something happen.

DF #4 KUMAGAI Saki (FC Bayern Munich/Germany)
As a player, it is such a pleasure to be able to play in front of our fans. I had my family come watch us and it really reminded me that we really feed off of the voices and cheers of our fans. We are also glad to be able to clinch the knockout stage on our own terms. Regardless of who we face, the competition will intensity from here on. Sweden has many talented players upfront, so we must prepare a plan to defend against them. We must be able to capitalise on our chances in order to survive through the knockout stage, so we will prepare ourselves in the best way possible and try to showcase a persistent fight on the pitch.

DF #2 SHIMIZU Risa (Nippon TV Tokyo Verdy Beleza)
It was great that we were able to advance through with a goal that came from a total team effort. We have been devoting ourselves to each match, and we hope to showcase a performance that can convey our determination to the viewers. We saw plenty of room for improvements in this match, so we hope to make the necessary adjustments for our next match. Sweden has gained great momentum after beating USA, but we hope to take the initiative through our passing game. 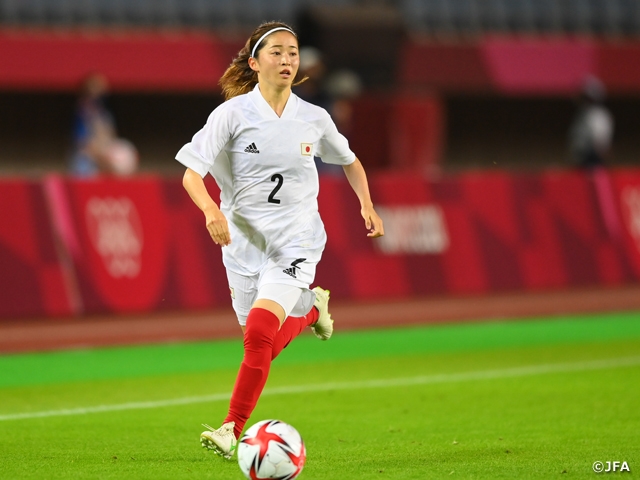 MF #8 MIURA Narumi (Nippon TV Tokyo Verdy Beleza)
We haven’t been able to fully execute our defensive plans in our first two matches, so I entered this match with the intention to lead the defence and there were scenes where I was able to force some good turnovers. We had plenty of space to keep the ball moving, but it felt like we were committing too many fouls, which is an aspect we must make fix when playing in a tournament like this. At the quarterfinals, we will fight until the last moment and showcase a tenacious effort, which is the core of the Nadeshiko football. I personally would like to get more touches on the ball and initiate the attacks for the team.

FW #11 TANAKA Mina (INAC Kobe Leonessa)
We had no way to advance other than to win this match, so I was committed to taking as many shots as possible. In the scene when I scored the goal, I was able to keep my cool and see which way the goalkeeper was moving. It was a very tough match, but we were able to keep our focus throughout the entire match and manage to score the game winner at the end. I missed a PK in the first match, but with the help of my teammates, I was able to redeem myself in this match, so I am very thankful. This match also reminded me the significance of having our fans at the stadium.

FW #10 IWABUCHI Mana (Arsenal/England)
We were caught off guards in the first match, faced a tough opponent in the second match, and played in a must win situation in our third match. I believe that all of these matches have helped us become a stronger team. We entered the match telling each other to showcase a performance that can portray the ideal football style we are striving for. We are looking forward to take on the challenge against the world powerhouses. We are not planning on losing anytime soon, so we will get rested and prepare for the next match. 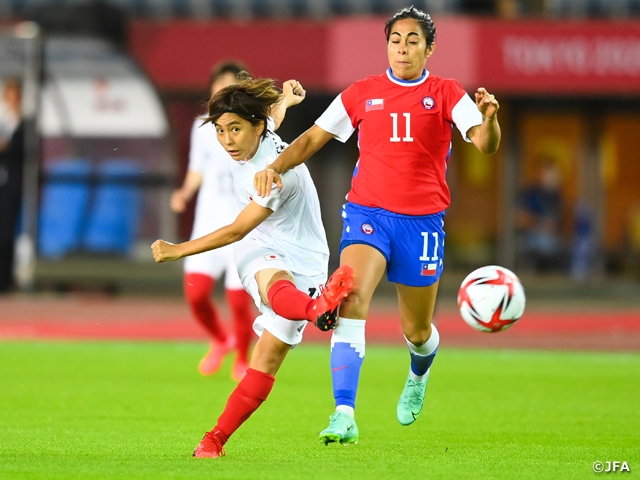